The Afghan interior ministry prevously said the Taliban were responsible for attacking dozens of mine clearers. The violence took place in a region north of Kabul that has seen heavy fighting recently. 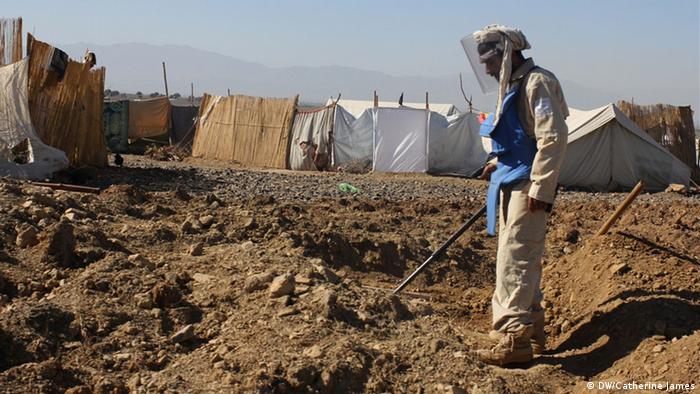 Afghanistan is littered with land mines following decades of conflict

"Islamic State" (IS) fighters attacked a group of mine-clearing workers in the north of Afghanistan on Tuesday evening. Afghan authorities said early Wednesday the assault killed 10 people and left at least 14 injured.

The attack happened in the Baghlan-e-Markazi district of Baghlan province, to the north of the capital Kabul. The injured victims were taken to a hospital in the nearby town of Pul-e-Khumri.

IS claimed responsibility for the attack in a statement. The Afghan interior ministry spokesman Tareq Arian previously told reporters that the Taliban was to blame.

"The Taliban entered a compound of a mine-clearing agency […] and started shooting everyone," Arian had said.

The nongovernmental organization has around 2,600 employees in the country, according to its website. As a result of decades of ongoing conflict, Afghanistan is one of the most heavily mined countries in the world.

Baghlan has been the scene of intense fighting between Taliban and government forces in recent months, with the insurgents planting roadside bombs that have often ended up killing or wounding civilians.

Although the Afghan government has blamed the Taliban, Halo Trust Chief Executive James Cowan told the BBC that the Taliban helped end the attack against the charity. Cowan said the local Taliban "scared the assailants off."

The UN called for a full investigation into the attack.

NGOs and aid organizations have frequently been the target of attacks in Afghanistan, according to details from the International NGO Safety Organization (INSO). Some 180 such incidents were reported in 2020, resulting in the deaths of 14 NGO workers. Another 27 people have been injured, and 42 have been kidnapped.

Violent conflicts erupt as US withdraws

Afghanistan has been marked by constant violent attacks on both military and civilian targets; but this violence has surged since May 1, when the United States began to withdraw its remaining forces from the country.

The Taliban were removed from power when the US invaded in 2001. The insurgents have begun to take advantage of the weakened Afghan security forces following unsuccessful attempts to broker a peace deal before the US and its allies leave.

On Monday, fighting was reported in 26 of the country's 34 provinces, killing at least 150 government soldiers in 24 hours.

Alongside the Islamist forces of the Taliban, Afghanistan is also home to other insurgent groups such as IS, with whom the Taliban are also vying for power.