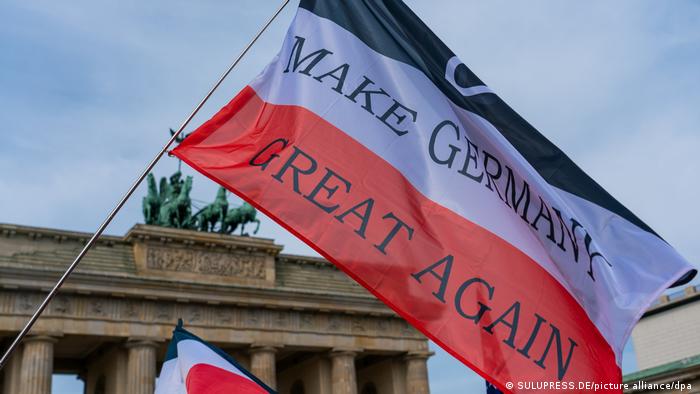 A short subchapter in the domestic intelligence agency's latest report suggests a new sensibility is beginning to penetrate the German security forces.

For the first time ever, the Bundesverfassungsschutz (BfV) included a section on the "New Right" in its annual catalog of political extremists in the country. This tag has come to denote, the BfV said, an "informal network" of individuals and organizations that don't organize violent attacks but feed a right-wing "cultural revolution" that threatens the German constitution.

The term New Right is anything but new: First coined in France to describe a countermovement to the left-wing student demonstrations of the 1960s, today it has become a current on the right-wing spectrum that seeks to bridge the gap between far-right extremism and democratic legitimacy.

The New Right is defined by its subtlety, according to the BfV. "Right-wing extremist associations are not always obvious," said the report, published in mid-June. "But they often make themselves known through violations of the principles of human dignity, the rule of law and democracy in various expressions."

Axel Salheiser, director of research into right-wing extremism at the Institute for Democracy and Civil Society (IDZ), welcomed the new inclusion in the report. "These were certainly blind spots of the Verfassungsschutz up until now," he told DW. "We're talking about a gray area or a continuum between the bourgeois center and hard-right extremist margins, and this shows that the categories relevant for state protection are being reexamined."

According to Salheiser, the New Right is characterized by its conscious strategy of presenting itself as middle class, patriotic and conservative while at the same time pushing what he calls "radical anti-democratic, ethnic-racist and anti-liberal positions."

Prominent among these is the "Great Replacement" conspiracy theory, which holds that a powerful, hidden Western elite (often coded as Jewish) is trying to displace ethnic white people by mass immigration from Africa and the Middle East.

But which organizations did the BfV put in its new subsection, and what do they stand for? None of them have been banned or even put under secret surveillance, but all of them are described as "suspicious cases" by the BfV. Only one, the Identitarian Movement, was mentioned in previous BfV reports. 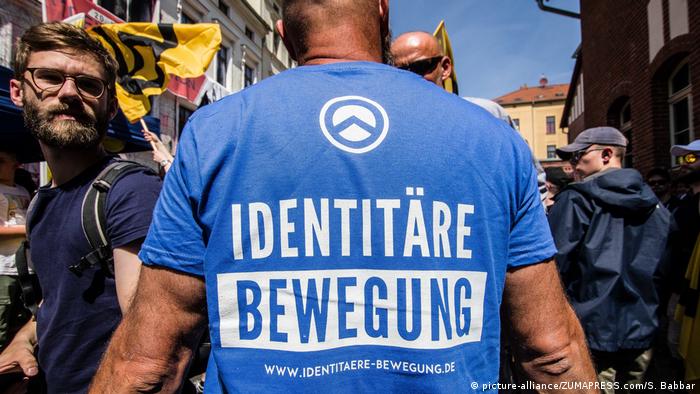 The Identitarian Movement is a Europe-wide right-wing network

The Identitarian Movement is a Europe-wide right-wing organization that made a name for itself less than a decade ago with public stunts such as flash mobs, specifically aimed at mobilizing young people.

According to the BfV, it numbered around 575 members in Germany in 2020, while the IBD's website says it has 300 activists and 1,000 supporters. But its influence reaches further, and its website boasts of how the group is "professionalizing the resistance": It has branches in each of Germany's 16 states, as well as a media agency, a financial consultancy, an online merchandise shop and even a craft beer.

Its ideology, meanwhile, is laid out in its "theory blog," which expounds on the guiding principle of the movement, and a concept that unites the New Right in general: "Ethnopluralism" — The idea that all nations should preserve their cultural — some would say racial — identity and that immigration should be curbed.

The BfV calls its biological definition of national identity a "violation of the principle of democracy." 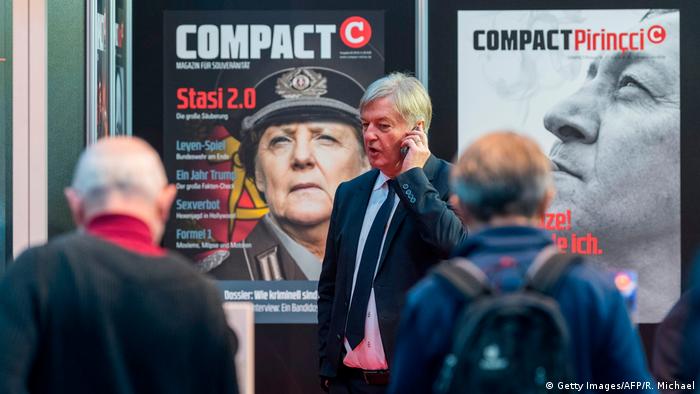 COMPACT has established itself as Germany's most widely-read New Right media outlet. Founded in 2010, it comprises a website (COMPACT online), a YouTube channel (COMPACT TV) and a monthly magazine that claims to have a circulation of 40,000 and is freely available in many high-street kiosks in the country.

Styling itself as a "Magazine for Sovereignty," COMPACT appears to have modeled itself as a German version of the US media outlet Breitbart.

A glance at its headlines shows that its articles are unapologetically one-sided: The Greenpeace parachute operation that nearly caused an accident at Germany's opening Euro 2020 match is described by COMPACT as "eco terror." Another article from June 2021 states as fact that former US President Donald Trump was cheated out of re-election by fraud, despite no evidence, and speculates how he might return to the presidency.

But it's the magazine's agitating against the German government and political system that has drawn the attention of the BfV, particularly its use of "resistance and revolution rhetoric."

This has become particularly notable during the pandemic when COMPACT co-founder Jürgen Elsässer spoke at anti-lockdown Querdenker protests of a "wind of change — like in autumn 1989" against the "Merkel regime." As the BfV put it, Elsässer's allusion effectively compared the toppling of East Germany's communist dictatorship with the destruction of Germany's democratic order.

The BfV has also identified ties between COMPACT and prominent far-right politicians like the Alternative for Germany's (AfD) Björn Höcke as well as the IBD, who both enjoy favorable coverage in the magazine. 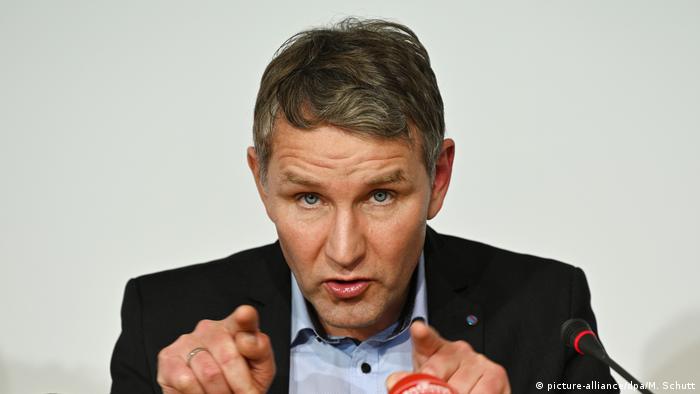 The "One Percent" group, which was founded in 2015 and has close ties with IBD, describes itself as a "professional resistance platform for German interests." Its name is based on the group's belief that the support of 1% of the German population (around 830,000 people) would be enough to turn the tide of public opinion in favor of its aims. The group currently claims to have 52,000 supporters. Like the other groups on this list, Ein Prozent places heavy emphasis on professional digital marketing, networking and media.

The projects listed on its website include a YouTube channel, a podcast (a recent episode included an interview with Björn Höcke), a videocast produced by "the first ever patriotic film studio," as well as a number of projects aimed at promoting right-wing artists, including an independently produced and distributed rock album and even a comic book imprint.

Ein Prozent also calls for volunteers to act as "election observers" — after the recent regional election in Saxony-Anhalt, it questioned the AfD's relatively poor results.

Like all the other groups on this list, Ein Prozent sees "mass immigration" — especially from Muslim countries — as the main threat to German society.

The BfV says its denigration of immigrants as a group violates the principles of equality and human dignity in the German constitution. 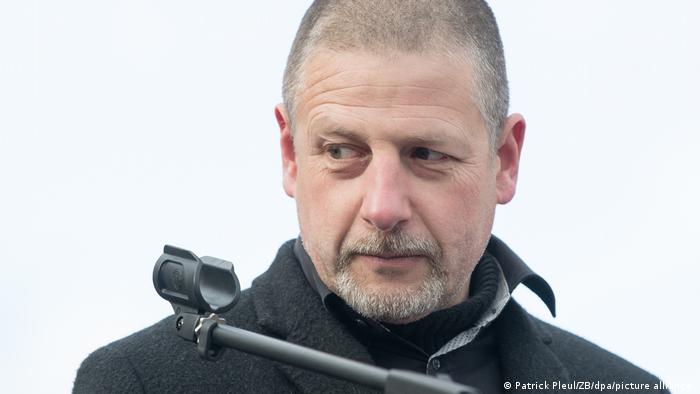 The Institute for State Policy (IfS) is a far-right intellectual think tank co-founded in 2000 by the then 30-year-old writer and activist Götz Kubitschek.

He has since become a guiding figure on the New Right, who had a hand in the ideological development of both Ein Prozent and IBD and appeared regularly as a speaker in the PEGIDA anti-Islamization demos of 2015 and 2016. He also has close ties with the AfD's Björn Höcke.

IfS is based in Kubitschek's adopted hometown of Schnellroda, in the eastern state of Saxony-Anhalt, where the think tank hosts regular conferences and publishes studies and other academic papers. Several of the speakers at these "academies" have been members of the AfD's nationalist hardcore, known as "the Wing."

The IfS considers itself as a corrective to what it sees as the leftward drift of mainstream politics and believes that traditional conservative parties like the Christian Democratic Union (CDU) and the business-friendly Free Democratic Party (FDP) have adopted multiculturalism.

"Our educational work is orientated against a single standard: The preservation of the German state," the IfS says on its website. "Without a national identity, there is no future for Germany."

The BfV says that the IfS' ideology, which denies ethnic minorities the right to belong to a national identity, is a violation of the principles of equality and human dignity set out in the constitution.