As vote counting in the US election drags into its fourth day, accusations and misinformation are flying around social media, including tweets from President Trump. DW Fact Check separates fact from fiction. 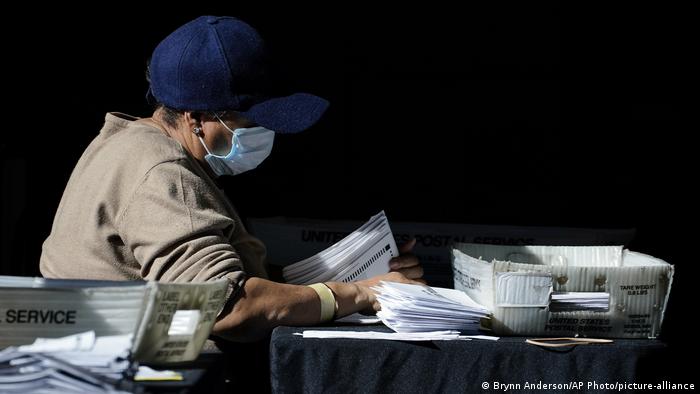 Rumors about how the results are being tabulated and possible instances of wrongdoing are making the rounds on Twitter. Some have even been tweeted and retweeted by President Donald Trump and his family members. DW's Fact Check team cuts through the noise and shows what we do — and don't — know so far in this tight election race.

President Donald Trump tweeted that there was chaos, blocked windows and observers where Detroit absentee ballot counting was happening, copying an article headline from the right-wing media outlet Breitbart. The article included videos showing poll workers in Detroit covering windows as onlookers outside tried to watch ballots being counted.

Police did push back crowds who had begun pounding on the doors and windows and yelling: "Stop the count!"

Not mentioned in the Breitbart article, however, was the fact that election officials said people could not enter the room because of concerns about capacity. Each side was allowed to have 134 observers monitor and challenge the counting process; that number was exceeded, as poll workers counted ballots from Detroit. In addition to the limited number of Republican, Democratic and nonpartisan poll watchers allowed in the room, media and lawyers were also present.

"Election observation is regulated by state law, but some states leave it to the discretion of election officials," explains the Organization for Security and Cooperation in Europe (OSCE)'s preliminary report on the 2020 US election that came out November 4. "Due to the COVID-19 pandemic, election officials in several jurisdictions limited the number of observers permitted." 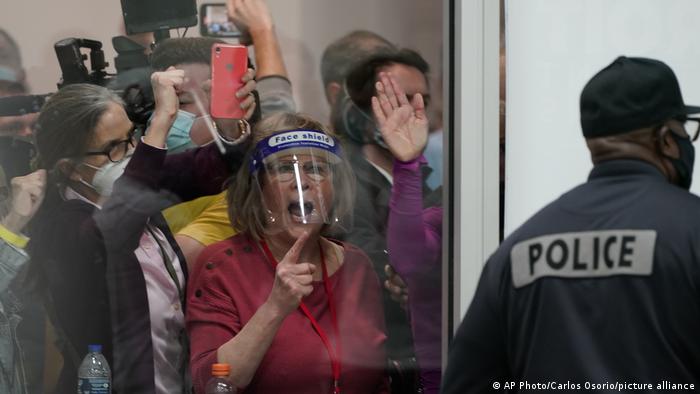 Republican challengers demanded to enter the location in Detroit

According to the Detroit Free Press, several lawyers also said problems began when Republican challengers intimidated poll workers by taking off their masks, getting too close to the workers or being verbally aggressive, including telling workers to stop counting because a lawsuit had been filed by the Trump campaign. DW was not able to independently verify whether the lawyers were independent or representing a political party.

Among Donald Trump's supporters, a number is circulating: 23,277 — the number of votes Biden is said to have unanimously received in one batch of ballots from Philadelphia. Trump's son Donald Jr. also retweeted this message.

Pennsylvania's votes are still being counted and the state, at the time of writing, lacks a clear winner in the presidential election.

But even people who say they belong neither to the Democratic nor the Republican camp question the plausibility.

Let us first look at where the number comes from. The origin seems to be from a tweet from the data journalism and poll aggregation site FiveThirtyEight, owned by ABC News.

Around 10 p.m. CET on November 4, the news service wrote that two new batches of counted votes had been reported from Pennsylvania: from Luzerne County and Philadelphia. The Philadelphia votes, 23,277, had gone "all for Biden."

DW Fact Checkers looked at the results from all of the divisions that had finished counting ballots by 11 a.m. CET November 5, which amounts to 98% of them.

In eight out of the 1,665 divisions, Biden received all the votes, amounting to 1,286 votes. If one also looks at the four divisions in which other candidates besides Biden received votes but Trump did not, 426 votes would be added to that total. So, at most, that would be 1,712 votes. This is well below the 23,277 number that's going around.

Deutsche Welle reached out to FiveThirtyEight about the origin of the number but did not receive a response.

FiveThirtyEight published a statement on Twitter at around 2:30 a.m. CET on November 6 regarding the issue. It refers to an explanation from Edison Research, the company aggregating voting data that the media network uses.

"Sometimes election officials and vote aggregators unintentionally enter vote updates one candidate at a time, rather than entering all candidates together. Other candidates' votes are then included in a subsequent batch," said FiveThirtyEight.

"In the next update from Philadelphia, Trump got about double the share of votes that he was getting in the other updates from there during that stretch of time," it added.

DW was not able to independently verify whether the batch of 23,277 votes going toward Biden was due to election officials unintentionally sorting the updates one candidate at a time.

Trump's son, Eric Trump, retweeted a claim that Sharpie pens had been given to voters in Republican areas in order to invalidate their votes.

There is a conspiracy theory that ballots marked with felt-tipped pens would be invalid as they couldn't be read by voting machines and that poll workers had specifically given these pens to Trump voters.

Arizona officials say there is no truth to this claim and that votes recorded with such pens would be counted. In fact, Arizona's secretary of state, Katie Hobbs, said that officials had specifically taken measures to make sure ink bleeding or stray marks did not invalidate votes, according to the New York Times.

Further, there was a reason for the fine-tip markers to be used — election officials said they had the fastest drying ink, so they helped avoid smudges on ballots.

Trump's lawyer Rudy Giuliani said the following in a statement to a crowd in Philadelphia on November 4:

"Not a single Republican has been able to look at any one of these mail ballots. They could be sent from Mars as far as we're concerned. Or they could be from the Democratic National Committee. Joe Biden could have voted 50 times as far as we know, or 5,000 times! The ballots could be from Camden. Philadelphia, unfortunately — and, I say this about my own city — has a reputation for voter fraud."

During the press conference, Giuliani said that poll watchers were being kept 20 to 30 feet (6 to 9 meters) away from seeing ballots. Poll watchers are required to keep 6-feet (1.8-meters) distance between them and other people due to COVID-19 health and safety protocols, according to the Pennsylvania government website, Votes PA. Giuliani didn't provide evidence of his claim.

Moreover, voters who cast a ballot by mail cannot vote 50 or 5,000 times. Not Joe Biden, nor anybody else. To vote by mail you have to be a registered voter and you get one vote. According to several studies, fraud is rare in US elections. Data collected by Loyola Law School professor Justin Levitt only found 31 incidents in elections from 2000 to 2014, elections where a total of 1 billion ballots were cast.

"From 2000 to 2014, I found 31 credible incidents," Levitt told DW about his research ahead of the election. "I've kept looking and I'm now up to about 45 credible incidents in more than a billion and a half ballots, so the rate's about the same. It's really, really, really rare. Americans are struck and killed by lightning more often."

But Rudy Giuliani insisted, that mail-in ballots in Pennsylvania could be from anywhere or anyone: Mars, the Democratic National Committee, or even dead people voting. He did not deliver any evidence for this. Independent election observers haven't found cases of this so far, either.

Susanne Baldsiefen contributed to this article.

This article was updated to include FiveThirtyEight's statement, which was published on Twitter after the article had been published.

Correction: A previous version of this article stated that a Pennsylvania batch of ballots tallied 23,722 votes for Joe Biden. The correct number is 23,277. This has now been corrected. We apologize for the error.

In a social media post, Trump said his ex-wife Ivana led "an inspirational life" and called her a "wonderful, beautiful and amazing woman."