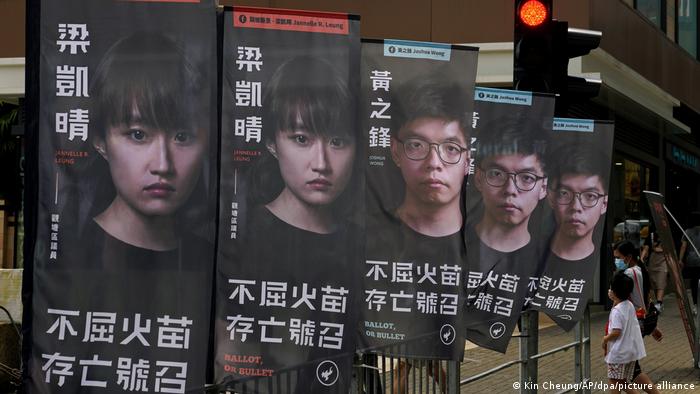 The foreign ministers of Australia, the United States, Britain and Canada expressed "serious concern" about the arrest of 55 pro-democracy activists in Hong Kong over the past weekin a joint statement released on Sunday.

The arrests were made on charges of "subversion" under  Hong Kong's new national security law, which was passed in June.

The people arrested were linked to an unofficial primary organized by pro-democracy parties ahead of legislative elections.

The countries also criticized the national security law as: "a clear breach of the Sino-British Joint Declaration and undermines the 'One Country, Two Systems' framework."

Hong Kong passed from British to Chinese governance in 1997 under the framework, which was meant to ensure that the semiautonomous territory and its residents would retain political freedoms and a market economy for at least 50 years.

The Sino-British Joint Declaration, registered in 1985 with the UN, is a legally binding treaty.

The new law "has curtailed the rights and freedoms of the people of Hong Kong," according to the joint statement.

It is "being used to eliminate dissent and opposing political views," the statement continued.

The four countries called on Hong Kong and Chinese authorities to "respect the legally guaranteed rights and freedoms of the people of Hong Kong."

The governments also recommended that Legislative Council elections — scheduled for December — should be postponed until candidates with varying political opinions are included.

"We are appalled by remarks made by some overseas government officials that seemed to suggest that people with certain political beliefs should be immune to legal sanctions,'' Hong Kong's government responded in a statement of its own.

The governments of China and Hong Kong have argued that the law is needed to restore order to the territory, which was rocked by months of anti-government protests in 2019, with people demanding greater democracy.

The joint statement was released as HKChronicles, a website that publishes content mainly related to the 2019 protests, reported that users' access had been blocked by internet service providers.

The Hong Kong-based South China Morning Post, citing unnamed sources, reported on Sunday that police had invoked the city's national security law for the first time to block the site.

The 55 arrested activists have not been charged. All but three have been released on bail pending further investigation.

Any convictions could disqualify them from running for office.

WHO: Poorer nations to get first 40 million vaccines next month 42m ago

US to review Afghan peace deal with Taliban 51m ago