China's parliament body has passed national security legislation for Hong Kong that critics believe will restrict the territory's freedoms. The move follows a series of escalations with the US. 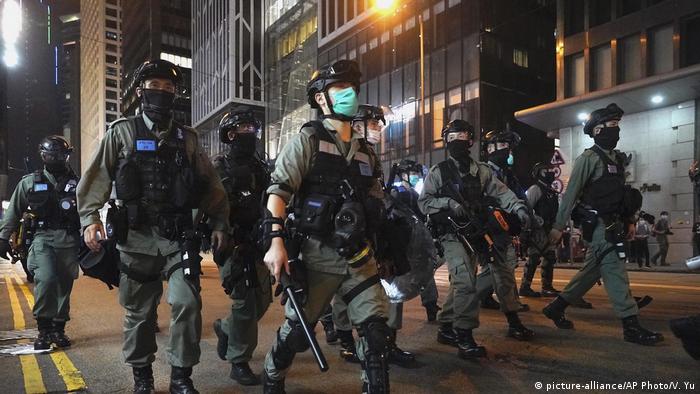 China's top legislative body on Tuesday unanimously approved a controversial national security law for Hong Kong, a move that paves the way for the most radical changes to the self-governing territory since it passed from British to Chinese rule in 1997.

The Chinese authorities kept the draft law away from the public eye during the discussion, releasing only bits of information. The full text was released some 12 hours after Chinese lawmakers endorsed the bill.

The measures were then signed into law by China's President Xi Jinping.

Hours after reports of the bill's approval emerged, Hong Kong activist Joshua Wong and co-leaders of the pro-democracy group Demosisto announced they were stepping down from the group. Wong had previously said he would be "targeted" by the new law.

The legislation pushes Beijing further along a collision course with the United States, Britain and other Western governments, which have said it erodes the high degree of Autonomy enjoyed by the global financial hub.

Beijing has said the law is in response to the pro-democracy protests that have taken place in Hong Kong since last year. The Chinese government said it hopes to curb subversion, terrorism, separatism and collision with foreign forces through the law.

What's in the new law?

The law makes secession and subversion punishable by a maximum sentence of a life in prison, according to text released by the country's Xinhua news agency. The law went into effect later at 1500 UTC.

Under the new legislation, China's national security agency and its staff would not be under the jurisdiction of the local government. Additionally, China will now have jurisdiction for "serious" security offenses in Hong Kong.

The new legislation also bans any violators from running in any elections in Hong Kong. Beijing said it aims to tackle not only secession, terrorism, and subversion, but also to halt "collusion" with foreign powers. Chinese officials have blamed the West, including the UK, for allegedly fanning the unrest in the former British colony.

Earlier this month, Beijing slammed the UK for "gross interference" after the London government said Hong Kong residents will get a path to UK citizenship if China adopted the controversial law.  A spokesman for the Chinese foreign ministry told Britain to “step back … otherwise there will be consequences.

Hong Kong officials are expected to meet at Beijing's top representative office in the city to discuss the law. Only a handful of Hong Kong lawmakers in the national legislature saw the draft bill before it was approved.

"The fact that Hong Kong people will only to know what's really in this new law after the fact is more than preposterous," opposition lawmaker Claudia Mo told the AFP news agency.

On Monday, Washington made first moves to end the special status Hong Kong enjoys with the US, arguing that China's national security law would destroy the city's autonomy. The US said it will also stop exporting defense equipment originating in the US to the territory.

"The United States is forced to take this action to protect US national security," US Secretary of State Mike Pompeo said in a statement. "We can no longer distinguish between the export of controlled items to Hong Kong or to mainland China."

The decision to halt defense exports and restrict the territory's access to high technology products came hours after China said it would impose new visa restrictions on US citizens, a move that was itself a response to an earlier escalation on the part of the US.

"We cannot risk these items falling into the hands of the People's Liberation Army, whose primary purpose is to uphold the dictatorship of the CCP by any means necessary," Pompeo said, referring to the Chinese Communist Party.

The US Commerce Department said it was suspending "preferential treatment to Hong Kong over China, including the availability of export license exceptions." Further actions to eliminate Hong Kong's status were being evaluated, it said.

Editor's Note: This is an updated version of a previous article.

The restrictions would be for US citizens who have "behaved egregiously" regarding Hong Kong. They are a direct response to the US' move to restrict visas for Chinese officials. (29.06.2020)

The US is restricting visas for Chinese officials thought responsible for undermining Hong Kong's autonomy. A new security law pushed by Beijing has drawn criticism from democracy activists and foreign governments. (26.06.2020)

Hundreds of Hong Kongers have marched silently through the city's streets in protest against the looming national security legislation to be implemented by the mainland Chinese government. (28.06.2020)