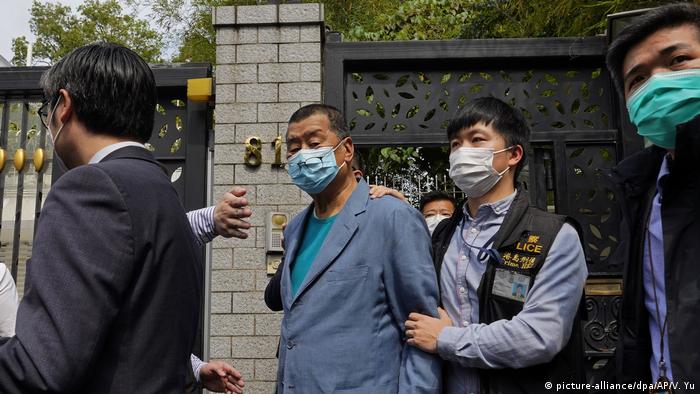 Jimmy Lai was detained in Hong Kong on April 18 this year.

DW: China will officially pass the national security law for Hong Kong on June 30, and the law will come into effect immediately. Are you worried that you will be a prime target of this law?

Jimmy Lai: I’m not worried and I’m not going away. I will stay in Hong Kong and fight until the last day. It doesn’t matter whether I’m one of the prime targets or not.

Everybody in Hong Kong is worried, especially people in the media industry. Because whatever you say or print could be labeled as evidence of subversion of state power or sedition. It is something that we have to be prepared to confront.

DW: Your newspaper, Apple Daily, has been one of the most outspoken critics of the Chinese government. Are you worried for the newspaper once the law comes into effect? 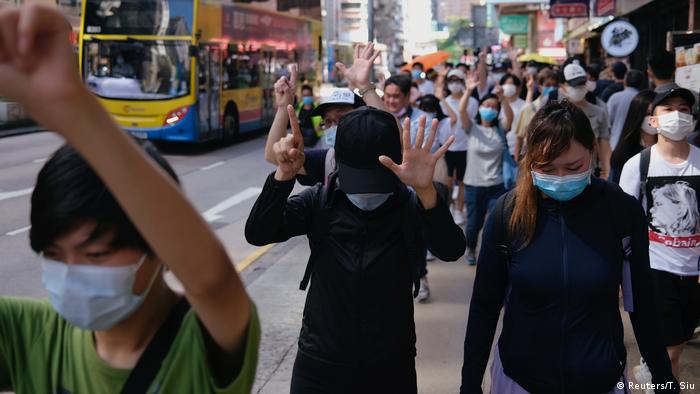 Protesters raise their hands up as a symbol of the "Five demands, not one less" in Hong Kong on June 28.

Even if we are the particular target of the law, it doesn’t mean we are not part of Hong Kong. I believe everyone in Hong Kong is prepared for what’s to come, and we are very worried. Some people even begin to plan for leaving the homeland that they have spent their entire life in.

But for us, we have have to stick around, and we will continue to publish the paper.

DW: The national security law can be seen as Beijing’s response to the anti-extradition bill protest that began last year. How do you view this response?

Jimmy Lai: The Chinese government never looks at the cause of the demonstration, and they never try to find out why more than two million Hong Kong people came out to protest. The only way they know to solve the problem is by suppression.

For Beijing, there is no reasoning because they don’t care about the people. All they care about is having total control and making sure that nobody is creating trouble. They expect everyone to be subservient and give them the praise, which is totally unacceptable to many Hong Kong people. DW: As an immigrant from China to Hong Kong, you have witnessed so many changes in Hong Kong. What’s your view on the ultimate impact of the national security law on Hong Kong?

Jimmy Lai: Beijing’s encroachment on Hong Kong starts very early on, with Article 23, then the extradition bill. The Chinese Communist Party has never stopped encroaching on all freedom and rule of law in Hong Kong.

The national security law is definitely a death knell for Hong Kong, but a lot of people still have the illusion to think that Hong Kong may survive this law. Either they have so much interest in Hong Kong or because they love Hong Kong so much. They could also just be having too much wishful thinking.

The law supersedes Hong Kong’s Basic Law and our rule of law, which also means it will be the end of Hong Kong’s status as a global financial center. Without rule of law, nobody who does business in Hong Kong can enjoy any protection unless they choose to bribe officials who have power over you.

Hong Kong will become just another Mainland Chinese city, and without the rule of law, there will be no mutual trust. If there is no mutual trust in the financial industry, Hong Kong as an international financial center is finished. I’m sure a lot of people are slowly preparing to go away, because I don’t see how Hong Kong can survive. 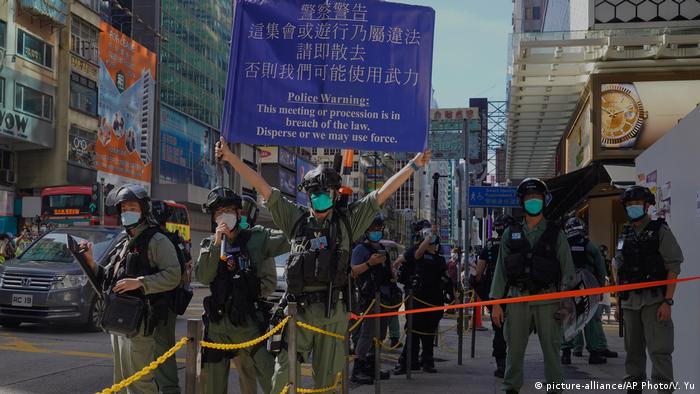 Police officers stand guard as people gather during a pro-democracy rally on June 28.

DW: You’ve been part of Hong Kong’s ongoing resistance against Beijing. What kind of advice do you have for the city’s younger generation?

Jimmy Lai: I think freedom and life are so precious to everyone, and no one has the right to persuade someone or dissuade someone from protecting freedoms in life. My message to those people is that please take care of yourself if you decide to leave Hong Kong, and we are thankful for what you have done for Hong Kong. We will stay and be standing on their shoulder to continue our fight.

DW: With many methods that Hong Kong people use to resist Beijing likely to become unavailable once the national security law comes into effect, what other options do Hong Kong people have to maintain the fight?

Jimmy Lai: I don’t think Hong Kong people will give up resisting, but I’m sure people are waiting to assess the real situation in Hong Kong once the law comes into effect. Many things are definitely going to change, as more people will likely leave the resistance movement against Beijing.

What we are trying to do is to continue the resistance and keep the backbone of the resistance. No matter how small the group of people who are still trying to resist is, they need to have different strategies to safeguard the movement’s integrity and force.