Ukraine crisis: A geopolitical chance for the EU? | Europe | News and current affairs from around the continent | DW | 13.01.2022 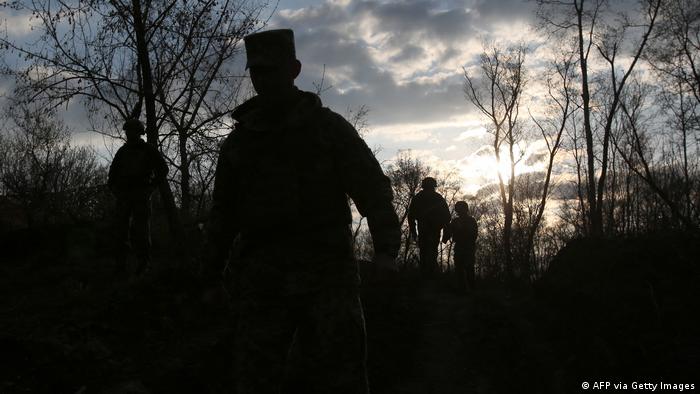 You could say that this week has not reflected well on the European Union's political power.

As the Russian troop buildup on the eastern Ukrainian border continues to stoke fears of a Russian invasion, Europe did not even get a spot at the negotiating table.

On Monday, senior diplomats from the United States and Russia met in Geneva for crunch talks, without any EU officials.

When the talks were moved to Brussels on Wednesday, the setting of choice was not the European Council bringing together European heads of state, but rather NATO headquarters.

On Thursday, negotiations are continuing at the permanent council of the Organization for Security and Cooperation in Europe in Vienna.

Russia is accused of having massed 100,000 combat-ready troops at the Ukrainian border; the West is asking these troops to be withdrawn.

Moscow is demanding that NATO pull its forces out of former Soviet countries, end any eastern expansion and rule out Ukraine joining the alliance. The US calls this unrealistic, while underlining that talks should continue.

And all along, it seems the EU is watching from afar.

EU member states' foreign ministers are coming together on Thursday and Friday in the northwestern French city of Brest. A French diplomatic source told journalists ahead of the informal meeting that the EU was "deeply implicated in ongoing discussions on Ukraine."

"We are coordinating closely with the US and being debriefed by them," the source said.

But observers can only marvel at how little of a role the EU seems to be playing.

"This feels like the post-World War II period when the Americans and Russians were deciding on Europe's future — especially as this conflict is taking place right at Europe's doorstep," Jacques Rupnik, head of research at the Paris-based Sciences Po University, told DW.

"The current situation is underlining how complicated it'll be for French President Emmanuel Macron to give Europe 'strategic autonomy' as he declared," he added.

France will be holding its six-month EU presidency until June. Pro-European Macron had said during a press conference in December that he wanted to make "Europe powerful in the world, completely sovereign, free in its choices and the master of its destiny."

The president announced an ambitious agenda, including a reform of the Schengen area with tighter control of Europe's external borders; stronger police cooperation; a new economic deal for the African continent; and a common European defense policy. 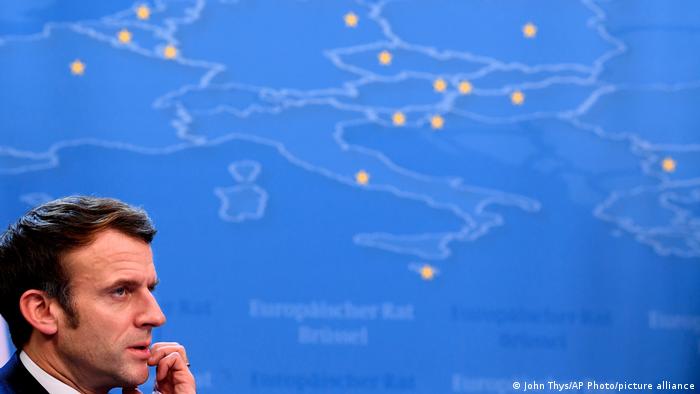 Macron has big plans for France's EU presidency, particularly in the field of security

With relation to such ambitions, Rupnik agrees the EU needs to get out of its role of an exclusively economic and commercial "soft power" and also become a geopolitical "hard power."

But for that, consensus is crucial. And divisions amongst European partners start at the most basic points.

"EU countries have diverging threat perceptions — Italy won't mind the security situation in the east as much as Poland, for example," Rupnik explained.

He added that after the tenure of former US President Donald Trump, member states assessed the US position differently. Trump had been the first US president to call the European Union a "foe."

Brendan Simms, Director of the Center for Geopolitics at Cambridge University in the United Kingdom, agrees that unity is the essential ingredient for Europe to become a hard power.

"The EU needs to turn into one state, with one president and one parliament, to become an important geopolitical player," he told DW. "That's how countries like the US, with its 50 member states, managed to bundle their forces."

But he conceded that such complete unity is unlikely to occur. "Alas, that means the EU won't be able to do what it wants, as its power will remain atomized," he said.

Shortcomings as an opportunity

"The current situation goes to show that the US doesn't hesitate to bypass Europe — even regarding a conflict happening in one of the EU's neighboring countries."

And that increases the urgency to come up with a common EU stance on defense, she believes.

"Europe now has to acknowledge that the world is dominated by competing powers such as China and the US, and that we have to act if we don't want to be completely overrun by things in the future," Pornschlegel said.

She's hoping the EU will find more common ground in March, when it's set to agree on the so-called strategic compass, a white paper on EU defense policy that Macron is pushing.

The meeting in Brest could partly pave the way for such an agreement.

French researcher Rupnik, meanwhile, predicts the EU's 27 will move closer together — at least when it comes to the matter of immigration.

"There now seems to be a consensus that we Europeans have to take back control over our external borders if the union is to persist — otherwise, nationalism will rise further," he concluded.

"In that sense, the EU could indeed form a more unified block in the future."

Opinion: Putin gets his way as West scrambles

Russia's President Putin is set to bask in the global limelight as a series of high-profile conferences on security in Europe kicks off this week. What could be better for an autocratic ruler, says DW's Bernd Riegert.

Ukraine-Russia crisis: US refuses to draw down troops

The US said it has no plans to cut troop numbers in Eastern Europe to defuse tensions with Russia. Top diplomat Antony Blinken said Russia is pushing a "false narrative" to justify troop deployments on Ukraine's border.

Opinion: Germany must face up to Russia's aggression

As tensions grow along the Russian-Ukrainian border, the honeymoon period of the new German government is set to be short-lived. It should use the tools it has together with the EU to push back, says Oliver Rolofs.

France aims high as it takes over EU presidency