France takes over EU presidency with push for 'strategic autonomy'

France will take over the EU presidency January 1 for the next six months. The motto of the tenure of France's EU presidency is "recovery, strength, belonging." 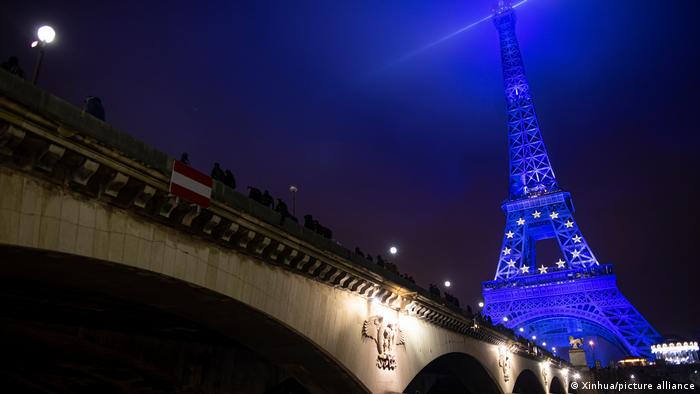 France took over the EU's rotating presidency on Saturday, ringing in the new year by taking the reins of the 27-member bloc.

French President Emmanuel Macron said Europe's new model for growth must include innovation, job creation and job security for the continent to remain competitive globally and be in line with climate harm reduction initiatives on the other side of the pandemic.

"This agenda for a sovereign Europe will be accelerated with the French Presidency. Europe must rise to the major economic, educational, migration and military challenges," Macron said in a statement.

What does the EU presidency mean for Macron and France?

Macron faces an election challenge in April, with polls scheduled for April 10 and 24. Although he has not yet said whether he will run again, Macron is expected to formally announce his reelection bid in February.

France's EU presidency comes at a beneficial time for him politically, as it is a chance for him to showcase France as a European power. This aligns with other objectives and messages he hopes to convey to the domestic electorate in the run-up to the country's presidential elections.

"The EU presidency gives him a welcome platform to put his European record to the forefront and differentiate himself from his rivals, and bring new proposals, new ideas to the table," Claire Demesmay at the Berlin think tank Marc-Bloch told news agency AFP.

What is on France's agenda?

France seeks to place the continent's digitization and climate protection at the forefront of its time at the helm of the EU.

"The French presidency must be a moment of truth for the regulation and accountability of digital platforms, the carbon pricing at European borders on imported products, minimum wages and our relationship with Africa," Macron said in a statement.

Berlin and Paris agree that great power competition, notably between the United States on the one hand and China and Russia on the other, has the potential to negatively impact the EU.

What has Berlin said about France's EU presidency?

German Foreign Minister Annalena Baerbock said her country and France have an obligation to strengthen the EU and make it an even greater world power as France takes over the EU presidency.

Speaking with AFP, Baerbock said Germany and France "as the closest of friends at the heart of Europe, bear a special responsibility for a united European Union, capable of acting and looking towards the future."

Germany will host the next G7 summit of wealthy nations as it takes over the G7 presidency with the start of the new year.

The EU's presidency rotates every six months among the member states of the 27-nation bloc.

This will be France's 13th time at the helm of the rotating presidency.

Across Paris, the Eiffel Tower, Arc de Triomphe and the Elysee Palace were all lit in the blue of the EU flag for the occasion.

Come summer, the Czech Republic will have its turn once the French EU presidency concludes on June 1.

The secret behind Champagne