NATO open to more talks with Russia amid Ukraine tensions

The US and its allies sat down with Russian envoys amid heightened tensions over Russia's troop buildup near Ukraine. While no gaps were bridged, NATO said it was ready for more talks with Moscow. 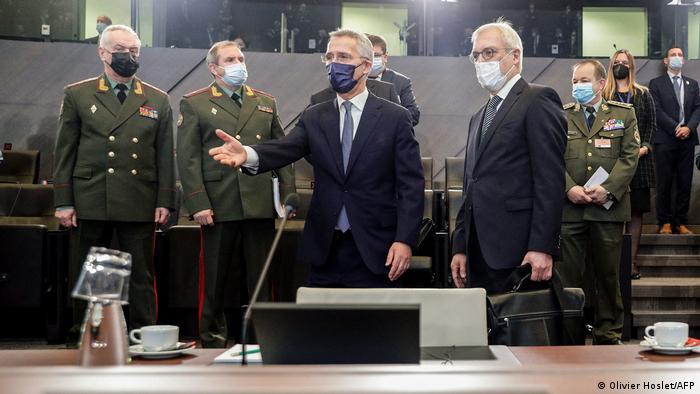 The NATO-Russia Council (NRC) convened on Wednesday in Brussels for the first time since July 2019.

The talks came during a series of high-profile meetings between Russian and Western officials as tensions rise over Russia's troop buildup on its border with Ukraine.

What did NATO say?

Stoltenberg told reporters the four-hour meeting, mainly focused on the situation in and around Ukraine, was a difficult and "direct" one.

"Our differences will not be easy to bridge," he said. "But it is a positive sign that all 30 NATO allies sat down with Russia after two years."

Despite their differences, NATO and Russia expressed the need for further dialogue, specifically about arms control and missile deployment, Stoltenberg said.

NATO head says differences with Russia 'not easy to bridge'

Russian envoys raised the security proposal that was published last month, Stoltenberg said. The proposal included Russia's demands to stop admitting any new members to NATO and to withdraw forces from the alliance's eastern states.

US Deputy Secretary of State Wendy Sherman said Washington and NATO allies are open for further dialogue with Moscow.

"If Russia walks away, however, it will be quite apparent they were never serious about pursuing diplomacy and that is why collectively we are preparing for every eventuality," she added. "The heavy pace of bilateral and multilateral engagements this week demonstrates that the United States and our allies and partners are not dragging our feet. It is Russia that has to make a stark choice: de-escalation and diplomacy or confrontation and consequences."

"We support peaceful solutions based on reasonable balance," he said after the talks.

Grushko accused the Western alliance of striving to "contain Russia" and gain "superiority."

"I think we have managed to make it clear to NATO members that the situation is becoming intolerable for Russia," he added.

Grushko also slammed NATO's presence in Eastern European countries: "The expansion does not resolve the issue of security. The expansion just moves the division lines, not removes them."

Asked about the suspension of Russia's diplomatic mission to NATO, Grushko blamed the decision on the alliance's "unfriendly" actions. "If NATO chooses a different course […] then I would not rule out that our mission would be restored," he added.

Russian Deputy Defense Minister Alexander Fomin said Moscow had offered de-escalation measures to NATO, but the alliance "ignored them," according to the Russian Interfax news agency.

Putin repeats demand that Ukraine should stay out of NATO

Why did NATO and Russian officials meet?

The NRC forum for talks was set up two decades ago. However, meetings paused when Russia annexed the Crimean Peninsula in 2014 and have only taken place sporadically since.

In recent months, NATO allies have raised concerns that Russia could be preparing to invade Ukrainian territory — akin to the 2014 annexation of the Crimean peninsula.

Moscow has been seeking assurances that NATO would not expand further east. Russia has also been pushing to prevent Ukraine from ever joining the alliance.

Russia is also due to hold talks with the Organization for Security and Cooperation in Europe on Thursday.

US, Russia set firm lines ahead of Ukraine talks

What does the meeting mean for Russia-West relations?

"You have to remember that since Russia's annexation of the Crimean peninsula in 2014, Russia has been essentially isolated on the international stage, including within NATO," Sherwin said.

NATO expressing willingness to reestablish missions in Moscow and Brussels, as well as schedule more talks, is a positive sign for Russia, she added.

Alexandra von Nahmen, DW's Brussels bureau chief, said there were had been no expectations in Brussels for a breakthrough or solution to the crisis out of Wednesday's talks.

"However, the fact that all 30 NATO states are coming together with Russia is very significant, because the NATO-Russia council body — created to have such kind of dialogue — has been dead for almost two and a half years," she said.

What is the situation at the Ukrainian border?

Ukraine has been fighting a pro-Moscow insurgency in two breakaway regions since the Russian annexation of Crimea.

On Wednesday, the Ukrainian army said that one of its soldiers had been killed in fighting with separatists on the eve of the NATO-Russia talks.

Since 2014, the conflict has killed more than 13,000 people, according to the Ukrainian government.