Russia's military buildup on its border with Ukraine has prompted the world's largest regional security organization to suggest war is possible. Kyiv has called for patience while Moscow says time is running out. 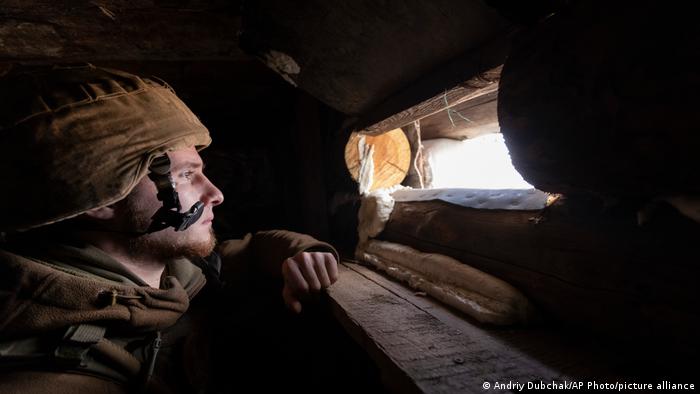 The world's largest security body met in Vienna on Thursday, seeking to bring Russia, the United States and its European allies toward a closer dialogue.

A meeting of the Organization for Security and Co-operation in Europe (OSCE) hoped to defuse the mounting crisis on Ukraine's border, where there is a large Russian military presence, but ended with organizers saying no breakthrough had been made.

Poland kicked off proceedings by warning that "the risk of war in the OSCE area is now greater than ever before in the last 30 years," Foreign Minister Zbigniew Rau told delegates gathered in the Austrian capital. Rau was speaking at the launch of his country's year-long chairmanship of the security-orientated organization.

No common EU position toward Russia

Helga Schmid, the secretary-general of the OSCE, said the ongoing situation in the region was "perilous" and that there was an "urgent need to reinvigorate the debate on European security."

"It is imperative we find a way through diplomacy to deescalate and begin rebuilding trust, transparency and cooperation," she said at the meeting attended by all 57 member states including Russia and the US.

But Russia's envoy to the OSCE said patience in Moscow is running thin over what it views as "unacceptable threats to our national security," Alexander Lukashevich tweeted on Thursday.

Later in the day, Lukashevich expressed disappointment regarding the talks that he described as a "moment of truth" but he hadn't given up hope that a diplomatic solution could be found.

"Russia is a peace-loving country. But we don't need peace at any price."

Drumbeat of war is loud, says US

The US envoy to the OSCE, Michael Carpenter, said after talks with Russia in Vienna, that "we're facing a crisis in European security. The drumbeat of war is sounding loud, and the rhetoric has gotten rather shrill."

Carpenter said Moscow's buildup of troops and increasing its weaponry near its border with Ukraine "begs a lot of questions about what Russia’s intentions are."

"We have to take this very seriously. We have to prepare for the eventuality that there could be an escalation," he said, adding that the US preferred "dialogue and de-escalation."

Life on the front line in Ukraine's Donbas region

The West has looked on warily as Russian tanks, artillery and some 100,000 troops deployed to the border with Ukraine in what some observers have said could be preparations for an invasion.

While the Kremlin insists the military buildup is a response to what it sees as the growing presence of NATO in Eastern Europe, namely the alliance's combat units in Poland and the Baltic republics of Estonia, Latvia and Lithuania. Russia is also keen for NATO to stop deploying missiles in countries such as Poland and Romania.

NATO head says differences with Russia 'not easy to bridge'

Russia wants NATO to rescind a 2008 promise that Ukraine could someday join the military alliance.

"For us it's absolutely mandatory to ensure Ukraine never ever becomes a member of NATO," Russia's Deputy Foreign Minister Sergei Ryabkov said after bilateral talks with the US in Geneva earlier this week.

Thursday's talks come amid a week of intense diplomacy, with Russian officials holding talks with the US, NATO and OSCE in Europe.

Ukrainian Foreign Minister Dmytro Kuleba on Thursday urged Russia to demonstrate it did not want to resolve the situation with aggressive actions.

"Despite the unsatisfactory week of great diplomacy for Russia, I believe that the only way for the Russians to confirm their lack of intention to solve problems by force is to continue the discussion in the established formats, in particular in the OSCE," Kuleba said in a statement.

Russia to set out Ukraine demands in NATO talks

Russia 'doesn't trust the other side'

There is little chance of Ukraine joining NATO any time soon, according to experts, as Kyiv doesn't meet membership requirements. But Moscow "doesn't trust the other side," Ryabkov said. "We need ironclad, waterproof, bulletproof, legally binding guarantees. Not assurances. Not safeguards."

EU foreign policy chief Josep Borrell said Thursday that there should be no negotiations with Russia so long as Moscow continues with its military presence near its border with Ukraine.