Recep Tayyip Erdogan will meet Donald Trump at the White House at a time of historic differences between the two NATO allies. Photo-ops and pomp won't fix a host of issues that have damaged relations. 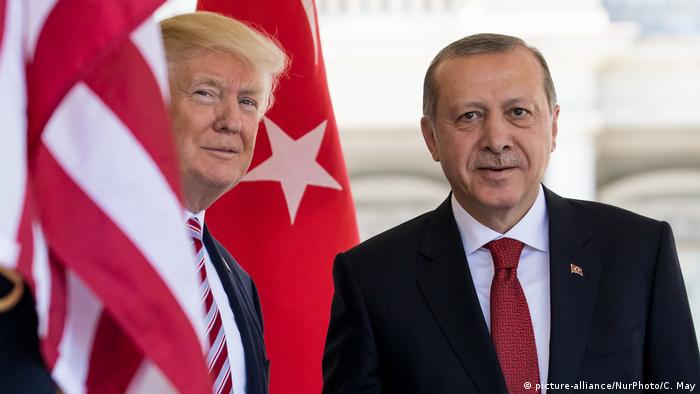 Turkish President Recep Tayyip Erdogan is heading to Washington to meet his US counterpart, Donald Trump, on Wednesday amid tense relations between the NATO allies over Syria and Ankara's purchase of a Russian missile system.

The last time Erdogan visited the US capital in 2017, his bodyguards pummeled peaceful pro-Kurdish protesters. The incident gave Washington policymakers a sour taste of repression against Erdogan's domestic critics and signaled the strong-arm tactics Turkey is willing to employ abroad.

Erdogan will use this visit "to show that, despite his autocratic drift, he's not an international pariah — and that's a photo-op and message the Trump team are happy to provide, having jettisoned even a token interest in democracy and human rights," said Max Hoffman, the associate director for national security at the Center for American Progress, a Washington-based think tank.

Relations between the two sides have reached a nadir after the strategic partners lurched from crisis to crisis on a host of issues in recent years.

The latest blow came last month when the Turkish military and a hodgepodge of allied rebel factions launched a long-threatened cross-border operation in northeast Syria against Washington's Kurdish allies in the fight against the "Islamic State" group, forcing the US to withdraw forces from the border region and unleashing a humanitarian disaster. Turkey then struck a separate deal with Russian President Vladimir Putin to clear the Kurdish YPG militia from the border, which has not been fully implemented.

Months earlier, the US was angered over Turkey's purchase of the Russian S-400 missile defense system, which Washington says is incompatible with NATO and threatens F-35 fighter jets. In response, the US kicked Turkey out of the F-35 fighter jet program, in which Ankara was a partner.

To the point - Old Faces, New Alliances: Who Will Win the Struggle for Syria?

Congress lines up against Turkey

The S-400 purchase and cross-border military operation against the YPG-led Syrian Democratic Forces (SDF) dramatically shifted opinion in Congress and the Washington policy community against Turkey, leaving Erdogan to rely on a personal relationship with an unpredictable Trump.

Congress has pressured the Trump administration to impose sanctions over the S-400 purchase under a US law known as the Countering America's Adversaries Through Sanctions Act (CAATSA). Separately, the US House of Representatives last month passed a sanctions package to punish Turkey over its Syria operation — the bill still needs to pass the Senate. Earlier this month, the House passed a nonbinding resolution recognizing the Armenian genocide during World War I, angering Ankara.

"Turkey will feel the impact of those sanctions," O'Brien told CBS's "Face the Nation" in an interview, referring to the CAATSA law. "There's no place in NATO for the S-400. There's no place in NATO for significant Russian military purchases. That's a message that the president will deliver to him (Erdogan) very clearly when he's here," O'Brien said.

Yet despite repeated threats over a host of Turkish actions in recent years, Erdogan continues to run roughshod over US interests and any semblance of democracy at home.

"Turkey has viewed the United States as malicious and behaved as if Washington needs Turkey more than Turkey needs the United States," said Howard Eissenstat, a nonresident fellow at the Project on Middle East Democracy and associate professor at St. Lawrence University. "It has derived from this experience that it's cost-free to challenge the United States, and this has exacerbated problems."

Differences between the two sides extend well beyond Syria and the S-400. Turkey continues to drill for oil in contested waters off Cyprus, and while Washington has issued light criticism over human rights abuses, it is worried about US Consulate workers that have been arrested as part of a massive domestic crackdown. Elsewhere, Turkey has helped Venezuela launder money and gold to skirt US sanctions, and its amiable relations with Iran run counter to US policy.

For Ankara, a long-standing extradition request for US-based Islamic preacher Fetullah Gulen, whom Erdogan blames for a bloody 2016 failed coup bid, and continuing US relations with the Kurdish YPG militia it views as terrorists, are among top issues. Erdogan also faces damaging allegations of corruption within his inner circle emerging from a US court case opened last month against state-run bank Halkbank over an Iran sanctions busting scheme.

"Despite the foggy atmosphere in our relations, we agree with Trump that the problems will be resolved and our relations improved," Erdogan said Tuesday in Ankara before departing to Washington. "Fighting terrorism is our priority. We want to start a new era in matters concerning the security of both countries."

Hoffman said that Erdogan will come to the White House with concrete demands of protection from sanctions, help removing the SDF/YPG from northern Syria, avoiding Halkbank prosecution, and the resolution of the S-400 issue in Ankara's favor.

"Erdogan's strategy of pressing maximalist demands with Trump personally — banking on Trump's lack of substantive knowledge and desire to be seen as a deal-maker — has worked well so far," he said.

"But surveying the demands he'll bring to Washington, there are many that are beyond Trump's executive power."

The leaders of Turkey, Russia and Iran are meeting again to strike a deal over the last rebel-held enclave in Syria. DW provides an overview of the catastrophic situation in Idlib. (15.09.2019)

US to deploy troops in northern Syria to protect oil fields

Secretary of Defense Mark Esper said the Pentagon was considering sending troops and armored vehicles to protect oil fields, controlled by Syrian Kurds, which might fall into the hands of the "Islamic State." (25.10.2019)

Three million people in jihadi-controlled Idlib are at the mercy of warring sides as Syria ramps up an offensive. The escalation has given renewed impetus for Russia and Turkey to fully implement a truce deal. (30.07.2019)

While Turkey moves forward with resettling Syrian refugees in its militarily-established 'safe zone' — a process it insists is voluntary —Germany is eyeing other options for an international solution to stabilize Syria. (01.11.2019)