US lawmakers recognize killing of Armenians as genocide 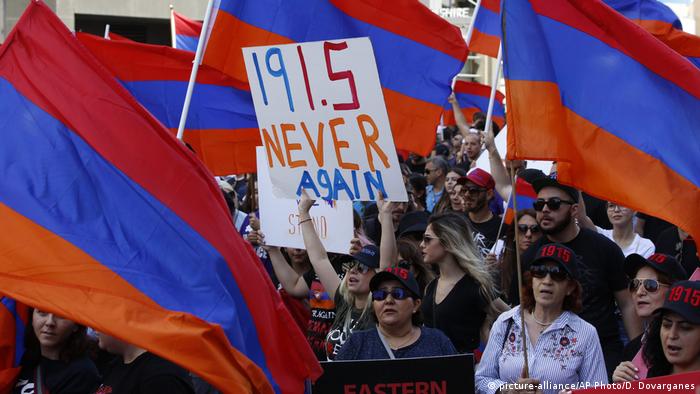 The US House of Representatives adopted a resolution on Tuesday, officially recognizing the mass killing of Armenians by the Ottoman Empire from 1915 to 1917 as genocide.

Similar measures had been introduced in both chambers of the US Congress for decades, but never passed due to concerns of a backlash from a NATO ally.

The historic moment comes at a time of tensions between US politicians and Turkey over its military offensive into Syria and a broad assault on Kurdish-controlled areas, following a retreat of US troops from the area that was ordered by President Donald Trump.

Armenians have called for the international community to recognize the mass killings of their people as genocide, which 30 countries including Germany and France have done so far.

Turkey on Monday summoned the US ambassador to Ankara, David Satterfield, to the foreign ministry over what it called "a resolution that lacks any historical or legal basis," in addition to a bill that imposes sanctions over Turkey's military action in Syria.

Pelosi 'honored' to vote for it

To cheers and applause, US House members supported the largely symbolic resolution by 405 votes to 11.

House Speaker Nancy Pelosi said she was honored to vote for it "in solemn remembrance of one of the great atrocities of the 20th century: the systematic murder of more than 1.5 million Armenian men, women and children by the Ottoman Empire."

"Today, let us clearly state the facts on the floor of this House to be etched forever into the Congressional Record: the barbarism committed against the Armenian people was a genocide," Pelosi said.

Shortly after the Armenian genocide vote, members overwhelmingly backed new legislation calling on Trump to impose sanctions on Turkey over its offensive in northern Syria.

Both measures will now be sent to the US Senate, where it is unclear if the Republican-controlled upper chamber will bring them up for a vote.

Turkey rejected the measure, saying it risked harming ties between both countries. "As a meaningless political step, its sole addressees are the Armenian lobby and anti-Turkey groups," the foreign ministry said in a statement.

"We believe that American friends of Turkey who support the continuation of the alliance and friendly relations will question this grave mistake and those who are responsible will be judged by the conscience of the American people," it added.

The foreign ministry also said the sanctions measure was "incompatible with the spirit of our NATO alliance," and contradicted a ceasefire agreement for northern Syria reached with the Trump administration on Oct. 17.

Turkey officially refers to what happened as the "Events of 1915" and denies that the massacre and deportation of Armenians in Anatolia amounted to genocide. The official line is that ethnic Armenians represented a fifth column backed by Russia during World War I, and that the mass deportation and accompanying Armenian deaths were not premeditated or intentional — a key requirement in the legal definition of genocide.

France marks day of remembrance of the Armenian genocide

The first major European country to recognize the 1915 massacres as genocide, France has dedicated its first national day of commemoration. The French prime minister led the ceremonies. (24.04.2019)

An Israeli legislative debate on recognizing the Armenian genocide has been postponed. It follows Turkey's comparison of Israel's action against Palestinians in Gaza to Nazi persecution of the Jews. (03.06.2018)

The US House speaker stressed that it was important the chronology of the latest flare of clashes be made clear, condemning the "assault on the sovereignty of Armenia."