Atrocities against Armenians should not be forgotten says Chancellor Merkel | News | DW | 24.08.2018

Choosing her words carefully in Armenia, Chancellor Angela Merkel avoided using the term "genocide" for the killing of up to 1.5 million Armenians in 1915. She did refer to the Bundestag's resolution two years ago. 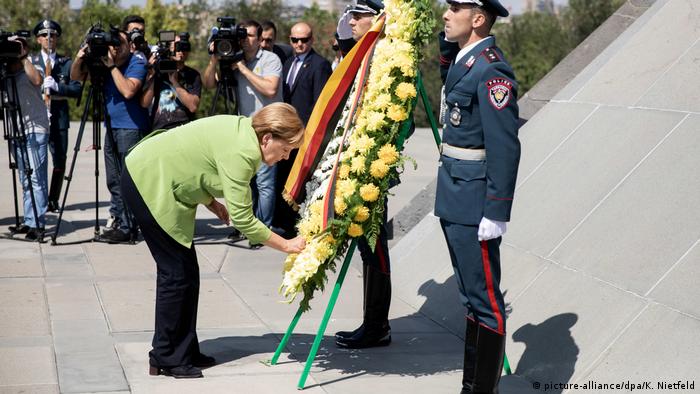 After being greeted by Armenian Prime Minister Nikol Pashinyan in Yerevan on Friday, Merkel went to the Tsitsernakaberd hilltop memorial.

She laid a wreath at the monument commemorating the victims of what Armenia describes as the 1915 genocide against 1.5 million people carried out as the Ottoman Empire disintegrated during World War I.

"We understand what atrocities were committed against countless Armenians," Merkel said. "This suffering should not and will not be forgotten."

In June 2016, the German parliament passed a resolution recognizing the massacres as genocide. It also acknowledged that Germany, a military ally of Ottoman Turkey, made no effort to stop the killings.

Merkel said she had visited the Tsitsernakaberd memorial "in the spirit of the Bundestag 2016 resolution," saying it was an "important step in the culture of remembrance" but clarified that the language used was a political, not a legal classification.

DW's Chief Political Editor Michaela Kuefner was at the ceremony.

Turkey has always denied extermination of the ethnic Armenian population and disputed the term genocide, saying that they died in smaller numbers and due to civil conflict rather than a planned Ottoman program of killings. 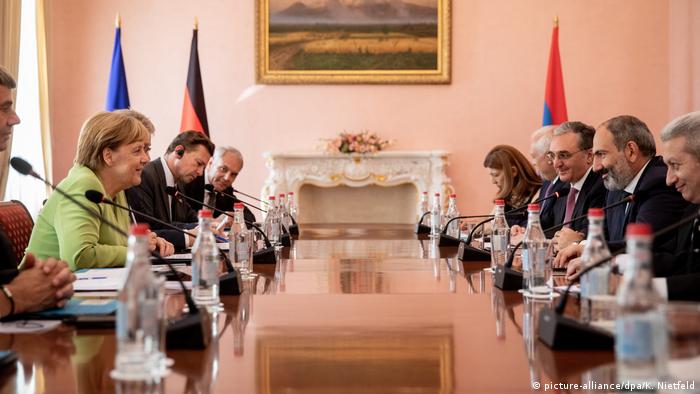 The German and Armenian delegations discussed a variety of topics

It was Merkel's first meeting with Pashinyan, who was elected in May. "Over the past months we have been following the developments in your country, the peaceful protests and the 'velvet revolution,'" Merkel said. "We spoke about bilateral relations, as well Armenia's relations with the EU."

While playing down the chances of negotiations between the Eurasian Economic Union and the EU, Merkel said Armenia could show how good relations with Russia and the EU were possible.

'A matter of national pride'