Armenia′s peaceful revolution?  | Europe| News and current affairs from around the continent | DW | 09.05.2018

Where is Armenia headed after a protest leader was elected prime minister? DW’s Tim Sebastian meets the Vice President of the now opposition Republican Party that lost the people's trust after decades of corruption.

Armenia has a new prime minister after weeks of leading protests against the Republican Party which had governed the country since 1999. Opposition leader Nikol Pashinian was elected with the help of the party he forced from power.

"We wanted at that time to show to the population, to the people that we finally heard their voices," the Republican Party's Vice President Armen Ashotyan now told DW's Conflict Zone.

"Armenia is in a situation where it's better to have any prime minister and any government than [none]," Ashotyan said.

The deputy party leader who also also chairs the Foreign Relations Committee in the National Assembly attempted to put the unprecedented Armenian protests into a wider context.

"I think that in European countries with more stable democratic institutions, it was very clear [...] this mistrust, fatigue, and miscommunications on behalf of [the] political elite led to the rise of the ultra-parties in all countries, in your country as well. In France, in Netherlands, in Germany. In Armenia, where the democratic institutions were not so strong, it came to another manifestation." 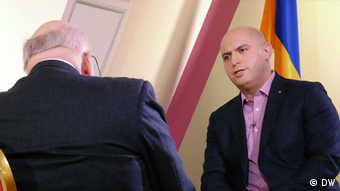 Armen Ashotyan is the Republican Party's Vice President and chairs the Foreign Relations Committee in the National Assembly.

"Armenia wants to become [a] more democratic country and more European by essence. So, we can't neglect the European experience."

Only a quarter of Armenians are satisfied with the state of democracy in their country. Nearly two-thirds either completely distrust political parties or lean towards distrusting them. Many people blame the ruling elite in the former Soviet republic. Pashinian, a former journalist and leader of the opposition Civil Contract party, led the protests that took thousands of people to the streets and forced long-time government head and Republican party leader, Serzh Sarksyan, to step down from the prime minister’s office in April.

Pashinian's victory could mark a turning point in the country's history. Armenia's population of three million has languished under a government that developed a reputation for corruption since the end of the Soviet Union.

From protest leader to prime minister

Although the Republicans initially blocked his bid to take the prime minster’s job on May 1, the party finally gave Pashinian the support needed. Lawmakers voted 59 to 42 to approve Pashinian as prime minister. "The Republican Party of Armenia will assist the election of the new Prime Minister." Ashotyan told DW's Tim Sebastian. "So it's very clear that the Republican Party of Armenia has a huge experience, knowledge, and is quite institutionalized and strong."

But part of the institutional legacy is corruption, fraudulent voting, voter intimidation and wide-spread poverty. Pashinian wants to change all that: "My first work after my election will be ensuring a normal life in the country," he said prior to the elections.

"There will be no privileged people in Armenia. Election results will no longer be falsified. No bribes will be distributed. The leadership will not be a means to earn money. Corruption will be eradicated."

According to a 2018 Freedom House report, Armenia’s democracy score is at 5.43 out of 7 points (1 = most democratic, 7 = least democratic). Its press freedom status is "not free".

Specifically, the report stated: "Media houses and professionals continued to experience harassment, interference, and small-scale violence. In one case, a fact-checking platform and its leader faced 30 simultaneous defamation lawsuits after publishing investigative reporting about the HHK’s abuse of administrative resources." 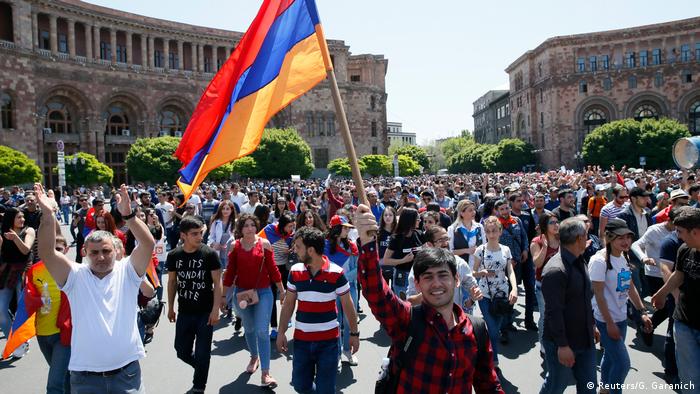 Protest leader Nikol Pashinyan announced a nationwide campaign of civil disobedience in May 2018.

Referring to this report, Sebastian told Ashotyan: "In other words, you let the powerful get away with abusing the system. That's the view of Freedom House."

The Republican Party’s VP admitted: "We have corruption in Armenia, we have a migration problem in Armenia."

But the electoral process has also been heavily flawed in the past, the parliamentary elections in April 2017 were no exception. Freedom House referred to an "abuse of administrative resources, fraudulent voting, alteration of votes, and voter intimidation."

On the topic of vote-buying, Ashotyan said: "Not only [the] Republican Party [was] accused in the actions like these." Asked whether that makes it okay, he said: "Just to remind there's a final statement that the political will of Armenian people has been expressed in the final results of this vote."

He also used the latest developments as a positive example: "The resignation of the president was a real act of non-violence policy. (…) The security phenomenon for the people living here during 4,000 years in a very unstable and volatile region has undergone many wars and invasions. It's question number one and we didn't want to put at risk the question of Armenia security as a state."

Russia traditionally is a close ally of Armenia. Moscow still maintains military bases in Armenia and tends to keep a close eye on so-called color revolutions such as occurred in Ukraine and Georgia.

Asked whether he was worried the Kremlin could move to enforce its interests as it had in Crimea, Ashotyan said: "We never put the parallels with Ukraine, Crimea, and any other country. (…) Mr. Pashinian also shared this position that Russia should remain our strategic partner."

But are there limits that Russia set in terms of how far Armenia can go? Ashotyan said Russia "never put the limits," and criticized the new prime minister’s position on Russia which "has been so drastically changed in six months." The former protest leader had previously reported for "Armexit" which proposed an exit from Russia’s Eurasian Economic Union.

Ashotyan also said Armenia had no reason to be concerned about Russia and that real security concern for the country was elsewhere:

"Why should we be afraid of Russia? (...) We are more afraid of Turkey. (...) We have Turkey next to us and no European countries were able to protect the Republic of Armenia up to now from the blockade implemented by Turkey, from the militaristic rhetorical President Erdogan."

After weeks of protests that pushed Armenia to the brink of crisis, the country now has a new prime minister. But locals at Yerevan's Firdaus market are fighting for their existence — and for a government they can trust. (08.05.2018)