Teenage Gunman Takes Own Life After German School Shooting | Germany | News and in-depth reporting from Berlin and beyond | DW | 11.03.2009

Police in Stuttgart have confirmed the death of a gunman in a school-shooting incident that left at least 15 victims dead and several injured near Stuttgart in the southwest of the country. 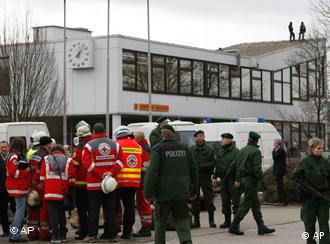 Police and rescue teams at the Albertville school near Stuttgart

German Chancellor Angela Merkel tried to give voice to a nation's horror after the fatal shootings of Wednesday, March 11.

"It's a day of sorrow for all of Germany," Merkel told reporters in Berlin. "It is incomprehensible that, within seconds, a terrible crime took pupils and teachers to their deaths."

At 9:30 a.m. local time, a 17-year-old identified only as Tim K. entered the Albertville school in Winnenden -- a town of 27,600, near Stuttgart in southwestern Germany -- and began shooting randomly. Nine students, aged between15 and 16, and three teachers died in this initial attack.

"I heard two shots and then a scream," a 15-year-old pupil inside the school told AP news agency. "At first, I thought it was a joke, but then someone yelled: 'Run, run!'"

Police said that two emergency squads were immediately dispatched to the school, but that the gunman had already hijacked a car and fled to the town of Wendlingen -- around 40 kilometers away.

Police said the gunman shot dead three bystanders, before taking his own life. Authorities corrected earlier reports saying the teenager was killed by police in a shoot-out.

Authorities estimated the total death toll to be at least 16, although initial details about those injured were sketchy. 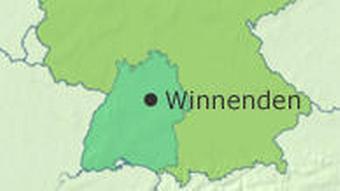 The gunman's father was a member of a local rifle club, and police who searched the family home found one pistol along with some 100 bullets missing.

Wednesday's shooting followed a rampage in the United States on Tuesday in which a gunman shot dead 11 people then killed himself in southern Alabama.

The Winnenden incident is the latest in a string of school shootings in Germany in recent years.

In 2006, a masked man opened fire at a school in the western German town of Emsdetten, wounding at least eleven people before committing suicide.

In April 2002, a gunman killed 17 students and teachers before killing himself at a high school in the eastern city Erfurt in the worst such incident.

German politicians and community leaders were unanimous in condemning the latest shooting spree.

Ulrich Wilhelm, spokesman for the federal government in Berlin, told reporters that the Winnenden incident was "horrific" but that the police had done all they could.