The German government supported the airstrikes by the US, UK and France in response to an alleged chemical weapons attack. But a new report has said the airstrikes infringed upon international law. 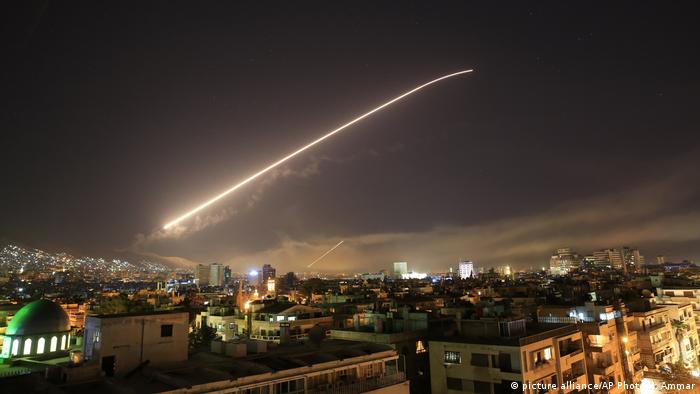 The United States, France and the United Kingdom violated international law by launching airstrikes against Syria in response to a suspected chemical weapons attack, an independent German parliamentary report has found.

"Military force used against a state to punish it for infringing an international convention violates the prohibition of force under international law," said the report by the German parliament's non-partisan research service (the "Unterabteilung Wissenschaftliche Dienste").

The three countries launched airstrikes on Saturday after accusing the Syrian government of carrying out a chemical weapons attack near the capital Damascus on April 7 that allegedly killed at least 40 people.

Hours after the operation, German Chancellor Angela Merkel had said the operation was "necessary and appropriate" to preserve the Chemical Weapons Convention (CWC), an international treaty outlawing the use of chemical weapons.

The report was commissioned by Germany's Left party, which asked the civil servants to ascertain if the strikes conformed with international law. The findings cited the UN Charter, which calls on members to "refrain … from the threat or use of force against the territorial integrity or political independence of any state."

This ban on using military force, the report added, still applies when a country breaches an international treaty such as the CWC.

The UK's argument that airstrikes would remedy a humanitarian crisis and were therefore exempt from this ban was "not convincing," according to the report. The strikes, it said, could not stop the suffering caused by the ongoing civil war and it was not clear why a chemical weapons attack was a "decisive" event that required humanitarian intervention.

Moreover, the report disagreed with an argument voiced by German Foreign Minister Heiko Maas, who had cited the UN Security Council's inability to react to the suspected chemical attack as part of his support for the airstrikes.

The Council's indecisiveness, based on Russia's opposition to US-backed proposals to investigate the suspected attack, was irrelevant from a legal perspective, it said.

'Slap in the face' for the German government

Left lawmakers Heike Hänsel and Alexander Neu called the WD report a "slap in the face" for the German government, which had helped "erode" international law by supporting airstrikes.

Omid Nouripour, the foreign policy spokesman for the Green Party, said it was "high time that the government publicly declare [it had broken international law]."

But the foreign policy spokesman for Merkel's conservatives, Roderich Kiesewetter, defended the government's support for the airstrikes despite the WD's findings.

In a Twitter post, he wrote: "Sometimes a politically suitable assessment of how to deal with violations of international law is needed … The [WD] report found the airstrikes were contrary to international law. I think the government reacted wisely!"

Syria's state news agency had reported that experts from the OPCW had already entered the site of an alleged chemical attack. But Syria's UN ambassador said only a UN security team has so far entered the besieged town. (18.04.2018)