Shias in Pakistan′s Parachinar caught in the middle of proxy wars | Asia | An in-depth look at news from across the continent | DW | 26.06.2017

Shias in Pakistan's Parachinar caught in the middle of proxy wars

Residents of Pakistan's northwestern Parachinar city, the target of suicide bombings on Friday, have been swept into ongoing sectarian and geopolitical conflicts. Yet, their plight receives scant coverage in local media. 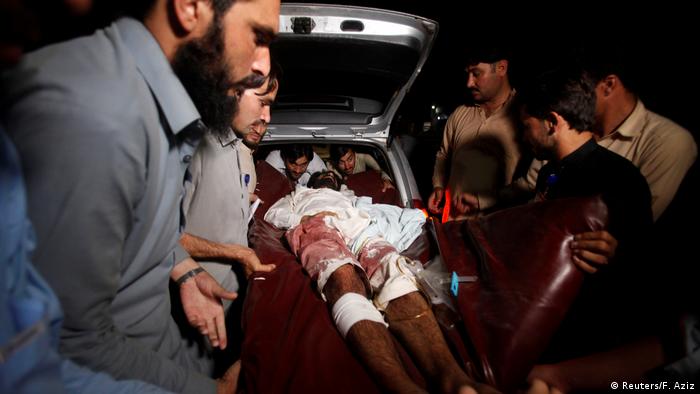 The death toll from Parachinar's twin bombings on Friday has risen to 67. Scores of people are injured and being treated in hospitals.

Parachinar, the capital of the Kurram district in Pakistan's Federally-Administered Tribal Areas (FATA), is a predominantly Shia area that shares border with Afghanistan.

A faction of the sectarian militant group Lashkar-e-Jhangvi, known as Al Alami, claimed responsibility for the attack, saying it was targeting Shia Muslims. In a statement, Al Alami said it had warned Parachinar's Shia community "to stop staining your hands with the blood of Sunnis in Syria." It repeated those demands, saying that "otherwise in the coming days you will face such hate-fueled and deadly attacks that you will not be able to stand them."

Parachinar's Shias deny any involvement in the Syrian conflict, saying it is only an excuse for their "sectarian cleansing" in a strategically important area due to its proximity with Afghanistan.

Since Saturday, Shia protesters in Parachinar have been staging a sit-in demanding security from the authorities. They blame the government's policies for emboldening Sunni extremist groups that frequently target them.

"It was the fourth major attack in Parachinar this year. In the past, the locals were responsible for their own security and it was very effective as they can identify militant groups. Now the army has taken over and the situation has worsened," Suhan Ali Turi, a Parachinar resident and member of a civil society group, told DW on the phone.

"There is no big sectarian conflict in Parachinar. But the government must act against the 'Islamic State' (IS) and Lashkar-e-Jhangvi's militants in the area," Turi demanded.

The Pakistani military has assured it will involve locals to improve the security situation in the area.

Read: What is Pakistan's militancy issue all about? But the situation in Parachinar is complex due to its geopolitical significance and a large Shia population in a region with an overall strong Sunni influence.

Analyst Aman Memon says that both Sunni and Shia militants have reportedly gone to fight in Syria from Pakistan, and that the Saudi Arabia-Iran proxy war is being fought in many parts of the country, including Parachinar.

"Iranian influence has prompted some Pakistani Shias to join pro-Bashar al-Assad groups in Syria. The Pakistani government is against this movement. At the same time, many Sunni jihadists from Pakistan are fighting against the Assad regime in Syria," Memon told DW.

"It is the Saudi-Iranian rivalry that is creating sectarian problems in Pakistan," Memon added.

Washington-based analyst Farzin Nadimi writes in a piece for The Washington Institute that "as part of its renewed effort to export the Islamic Revolution through armed proxies, Tehran has been recruiting and training Afghan and Pakistani fighters for Syria's battlefields, thereby giving them invaluable experience for potential future campaigns in other regional countries."

Pakistan claims the Parachinar bombers had links with Afghanistan, but some analysts say the South Asian country's policymakers consider the Parachinar Shias a "hindrance" in their pursuit of a "deep state." The term "deep state" is used by security and defense experts to explain Pakistan's alleged efforts to increase its clout in Afghanistan by supporting Sunni jihadists in order to minimize Indian influence in the war-torn country. Islamabad denies it pursues this policy.

Some security experts also say that the Lashkar-e-Jhangvi group, which claimed responsibility for the Parachinar blasts, allegedly receives support from units of Pakistan's intelligence agencies. Lashkar-e-Jhangvi is also closely connected to the Afghan Taliban and has links to Jundullah, the anti-Iran Sunni militant group.

The tug-of-war between Saudi Arabia and Iran, with its most recent manifestation in the Arab countries' boycott of Qatar, is likely to intensify sectarian conflict in Pakistan, a Sunni-majority country with between five to 20 percent Shia population.

Pakistan said it would remain neutral in the Gulf crisis, but many analysts are of the view that it is more inclined towards Riyadh in the Saudi-Iranian regional rivalry.

For Pakistan's Islamic fanatics, the country "is already a 'Sunni Wall' against Shiite Iran," Siegfried O. Wolf, director of research at the Brussels-based South Asia Democratic Forum (SADF), told DW in an interview.

Despite the seriousness of the conflict in Parachinar, and the bombings that killed scores of people, it is receiving scant coverage in mainstream Pakistani media.

"The Shia community feels increasingly alienated in Pakistan. Since the Parachinar suicide attacks, thousands of Shias have been protesting daily for hours but Pakistani media is deliberately underreporting it," said Sattar Khan, DW's Islamabad correspondent.

#IStandWithParachinar is trending on Pakistani social media, with civil society groups criticizing the "media blackout" of the Parachinar protests.

Ali Chishti, a security and political analyst in Karachi, says that the Pakistani state has failed to protect not just the Shias but most of its citizens. "Pakistan is headed in a completely wrong direction and faces an existential threat due to its policies," Chishti told DW.

Pakistan has approved the appointment of its former army chief, Raheel Sharif, as the head of a Saudi-led military alliance. Experts say the regional and domestic repercussions of this move could be disastrous. (25.04.2017)