Attacks on Shiites intensify in Pakistan | Asia| An in-depth look at news from across the continent | DW | 22.01.2014

Attacks on Shiites intensify in Pakistan 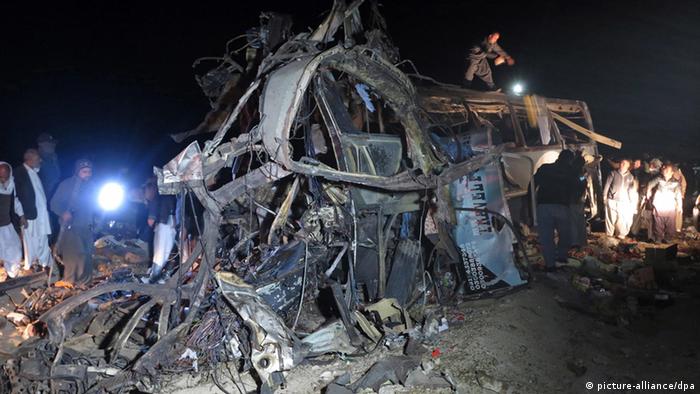 A passenger bus was carrying 51 Shiite pilgrims from Iran to Pakistan's western Balochistan province when it was hit by a bomb on Tuesday, January 21. Authorities confirmed 22 deaths in the attack, which took place in the Mastung district near the Pakistani-Iranian Taftan border. Two people were killed in a previous attack in early January when a bomb targeted a bus carrying Shiite pilgrims near Quetta, the capital city of the Balochistan province.

Nobody claimed responsibility for the Tuesday bombing, but in the past militant groups belonging to the majority Sunni sect have carried out similar attacks.

Lately, Pakistan's militant Sunni extremists with links to al Qaeda have intensified their attacks on minority Shiites, whom they do not recognize as Muslims. 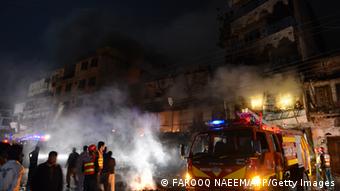 Violence between the two secular groups shows no sign of diminishing

In August, 2013, the al Qaeda-linked Lashkar-e-Jhangvi group massacred at least 50 Shiites in a string of terrorist attacks. The attacks were perpetrated on the mosque of ethnic Hazara Shiites in Quetta. 2012 was also a deadly year for Pakistan's Shiites. Human rights groups say that more than 300 of them were killed then.

A 'systematic' process of killing

Pakistani experts say that although the lives of Shiite Muslims are under threat all over Pakistan, those living in Balochistan and the northwestern Gilgit-Baltistan region face a systematic onslaught by the Taliban and other militant groups. Some experts have gone so far as to call it a "genocide."

Several people have been killed in the latest wave of violence against polio vaccinators in Pakistan. The attacks undermine government efforts to eradicate the virus in one of the few countries where it remains endemic. (22.01.2014)

After holding elections, Bangladesh is facing a political deadlock. A military intervention seems possible, but it would deal a heavy blow to democracy in the South Asian nation, says expert Jasmin Lorch. (07.01.2014)

Pakistan ends 2013 on a positive note

The year 2013 was good for Pakistan: the country saw a successful transition of power from one elected government to another; the level of Islamist violence dropped a few notches; and the economy improved considerably. (30.12.2013)

An Islamic or secular Pakistan?

Did Pakistan's founder Jinnah want to create an Islamic or a secular state? The question divides Pakistanis even after 66 years of their country's independence. Some say Jinnah was not very clear about it himself. (26.12.2013)

"The Lashkar-e-Jhangvi, which allegedly receives support from units of Pakistani intelligence agencies, has accepted responsibility for most attacks on Shiites in the recent past," said Malik Siraj Akbar, a Balochistan expert in Washington.

"The organization is closely connected to the Afghan Taliban and has renewed connections with Jundullah, the anti-Iran Sunni militant group. All these groups share abhorrence for the Shiites," he said, adding that the sectarian war in Pakistan between militant Sunnis and unarmed Shiites is turning uglier by the day.

Akbar says that militant Sunnis ask Shiites to either quit Pakistan or convert to their brand of Islam. "Both demands seem unacceptable considering the fact that Pakistan has the world's second highest Shiite population after Iran," he told.

Experts believe that the Saudi-backed Sunni hardliners are targeting Shiites to kill Iran's support in Pakistan. "Pakistani Shiites have close ties with Iran. On the other hand, Baloch separatists prefer to be with Tehran rather than Islamabad. This makes both the Shiites and Balochs suspicious in the eyes of the various stakeholders in the establishment. It is certainly not acceptable to Pakistan, Saudi Arabia and other regional powers," Nahyan Mirza, a communication expert in Islamabad, told DW.

Analysts are of the view that the Tuesday killings have again exposed the risks the Pakistani state has been confronting for many years. They say that unless the Pakistani state changed its priorities, such attacks would not cease in Balochistan and elsewhere in the country. 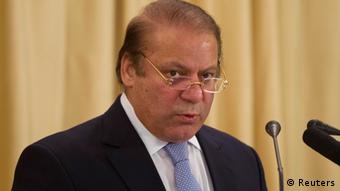 After coming to power in June 2013, Pakistani Prime Minister Nawaz Sharif announced that his government would not follow the preceding Asif Ali Zardari government's anti-terrorism policy and would instead make peace with Islamist groups, including the Taliban.

Development worker and political activist Maqsood Ahmad Jan believes Sharif's insistence on peace talks with the Taliban and other radical groups are emboldening them.

Amin Mughal, a Pakistani journalist and scholar in London, believes that the policy of supporting Islamist groups has backfired and that the Pakistani state is no longer in a position to control the situation.