More than 80 dead across Pakistan in series of attacks

Numerous attacks have rocked Pakistan on the last day of the fasting month of Ramadan. The explosions and a shooting have killed dozens and been dubbed "Pakistan's Black Friday." 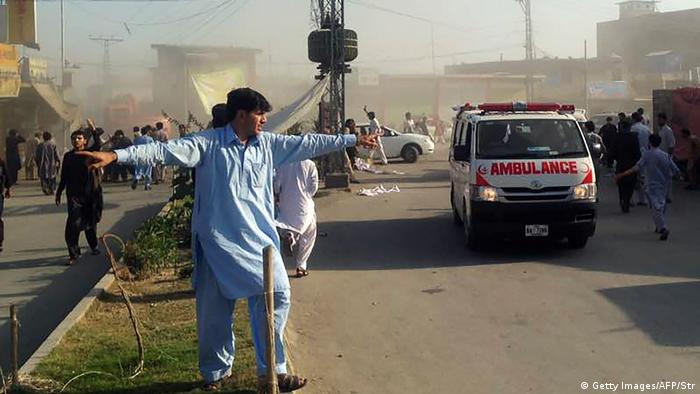 Pakistan was hit by three separate terrorist attacks across the country on Friday that killed more than 80 people. The attacks happened as Muslims neared the end of the holy month of Ramadan.

In the southwestern city of Quetta, a suicide car bomb killed 14 people. Later, in the northwestern town of Parachinar, two blasts killed at least 67 people. And in the evening, in the southern metropolis of Karachi, a gun attack killed four police officers.

Prime Minister Nawaz Sharif called for increased security across the country as he condemned the attack, saying that no Muslim could ever imagine committing such a "horrific" act. Two explosions tore through a market crowded with shoppers preparing for the Eid-al-Fitr festival in Parachinar, the capital of the Kurram district. The bombs were timed to strike within minutes of each other, with the second one killing people who were responding to the first explosion.

At least 250 people were wounded, according to the medical superintendent of Parachinar Hospital.

A faction of the sectarian militant group Lashkar-e-Jhangvi, known as Al Alami, claimed responsibility on Saturday for the twin blasts in Parachinar, saying it was targeting Shiite Muslims.

The city is in a mainly Shiite area of Pakistan's semi-autonomous tribal belt, near the border with Afghanistan.

Local lawmaker Sajid Hussain Turi, the owner of the market, said vehicles had been banned from markets in Parachinar following multiple attacks in the city earlier this year.

Security forces later raided a militant hideout in Peshawar, about 300 kilometers (180 miles) away, triggering a shootout in which three Pakistani Taliban were killed, according to a senior police official. 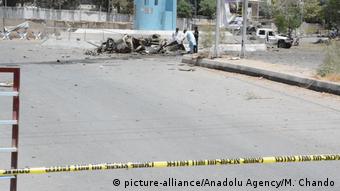 Police cordoned off the blast site in Quetta

In a statement, Al Alami said it had warned Parachinar's Shiite community "to stop staining your hands with the blood of Sunnis in Syria." It repeated those demands, saying that "otherwise in the coming days you will face such hate-fueled and deadly attacks that you will not be able to stand them."

Hundreds of Shiite Pakistanis are believed to be have been recruited by Iran to fight in Syria alongside Syrian President Bashar al-Assad's regime forces.

Police were targeted in an earlier car bomb attack in the capital of Baluchistan province, Quetta.

The car was stopped at a checkpoint in front of the provincial police chief's office when explosives inside were detonated, killing 14 people and injuring about 20.

An official from Baluchistan's bomb disposal unit told news agency Reuters the car had contained up to 95 kilograms (209 pounds) of explosives.

Jamaat-ul-Ahrar, a splinter group of the Pakistani Taliban, has claimed responsibility. They pledged that their attacks would continue "until a true Sharia system is enforced in Pakistan," referring to Islamic law.

Late on Friday, four police officers were shot dead as they broke their daily Ramadan fast at a roadside restaurant in Karachi, Pakistan's largest city and financial capital.

Gunmen reportedly approached them on motorcycles.

Pakistani authorities have claimed retaliation for a terrorist attack at a shrine that killed 88 people. The attack spurred fears that the so-called "Islamic State" has a growing foothold in the country. (17.02.2017)

A motorcycle bomb struck a crowd of protestors in Lahore, killing several people and wounding dozens. A faction of the Taliban claimed credit for the attack. (13.02.2017)

Several people have been killed and wounded in a bomb attack in the northwestern Kurram tribal region of Pakistan. The area has seen several sectarian clashes between Sunni and Shiite Muslims in the past. (21.01.2017)