SPD candidate Martin Schulz would receive 16 percent more votes than current CDU Chancellor Angela Merkel, a survey showed. The SPD has benefited since Schulz was nominated as the party's candidate for the Chancellery. 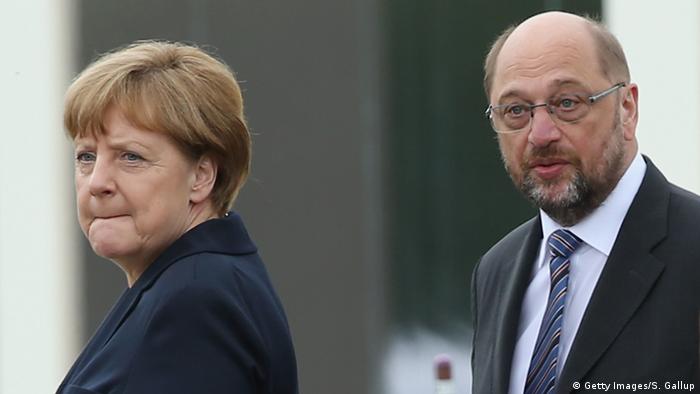 German voters would elect the Social Democratic Party (SDP) candidate Martin Schulz as chancellor if the country were to hold direct elections today, an opinion poll conducted for the German broadcaster ARD revealed on Thursday.

Schulz would receive 50 percent of votes cast while Angela Merkel, the current chancellor and head of the Christian Democratic Union (CDU), would receive 34 percent of the vote. However, even when they are called on to cast ballots in the September parliamentary elections, Germans will not directly vote for the chancellor.

Schulz's capture of half of those surveyed amounted to an increase of 9 percentage points in comparison to the end of January; Merkel saw her share of the vote drop by 7 percentage points. Seven percent of those polled said they would choose neither Schulz nor Merkel as Germany's next chancellor.

Broad gains for the SPD Overall, the poll results reflected broad political gains for the SPD since the left-leaning party announced Schulz, the former European Parliament president, as its chancellor candidate and successor to Sigmar Gabriel as party head.

In findings more representative of the German voting system,the SPD as a party has 28 percent of eligible voters' support, their best result thus far in the current legislative period that began in late 2013. The CDU remains Germany's strongest political party, leading with 34 percent support - down 3 percentage points from January.

Half of all participants polled also indicated a desire for the SPD to take over leadership of the federal government from the CDU and its Bavarian sister party, the Christian Social Union. Only 39 percent of those surveyed thought the federal government should continue to be led by a member of the so-called Union of CDU and CSU parties.

The poll, which surveyed 1,506 eligible voters from Monday to Wednesday, comes eight months ahead of the next German parliamentary elections set for September 24.

The closely watched Alternative for Germany (AfD), the populist, anti-immigrant and Islamophobic party that has made major political gains at regional levels, polled at 12 percent, down three points from January.

The Left and the Green Parties also lost one point each since January, leaving them equal at 8 percent.

The poll results brought good news to the Free Democratic Party (FDP), which saw its popularity increase one point to 6 percent; this puts them over the 5-percent hurdle needed to enter the Bundestag. The FDP has been absent from federal representation since 2013, when they fell just short of the entry threshold with 4.8 percent of the vote.

However, the poll's margin of error means a re-entrance into the Bundestag is far from guaranteed. Who would have thought it? She was seen as a stop-gap after Helmut Kohl. But for the last 16 years she has led the CDU and for the last 11, she's led Germany's government. And the Merkel era may well continue. (21.11.2016)