Martin Schulz, the German Social Democrats' new electoral vanguard, has pulled level with Chancellor Angela Merkel in opinion polls. They were asked who they would favor if the chancellor were directly elected. 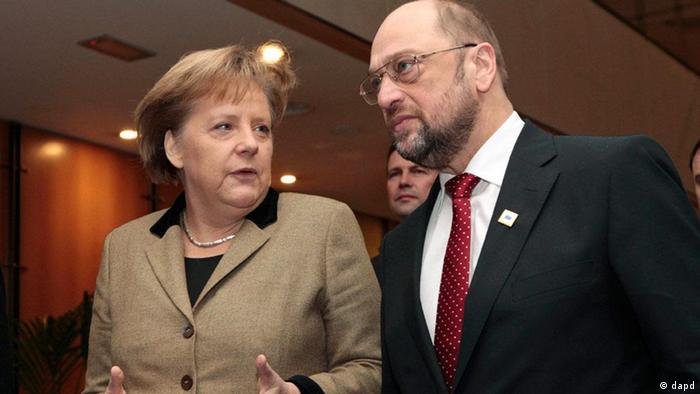 Volker Kauder, the member of Merkel's Christian Democratic Union (CDU) who leads her conservative group in the Bundestag, dismissed Schulz's upstart emergence as what happens "when someone new steps onto the stage."

Voters sampled Wednesday - one day after the SPD's Sigmar Gabriel stepped asideto let Schulz run for the Chancellery - put both Merkel and Schulz at 41 percent as their preferred chancellor.Those polled were asked which candidate they would prefer to see running the country, but the chancellor will officially be chosen by parliament after elections this autumn - not by a direct vote.

Although Schulz holds no seat in Germany's current parliament and has yet to outline his domestic German agenda, voters ranked Schulz high on several criteria.

Merkel ranked higher when it came to competence, at 78 percent, with Schulz on 68 percent. Likewise, on leadership power, Merkel led on 79 percent, compared to 68 percent.

Gabriel, who on Tuesday renounced the SPD leadership to focus on becoming foreign minister, had consistently trailed Merkel in opinion polls.

Another representative survey conducted by the pollster INSA for Germany's "Bild" newspaper found that 58 percent of voters believed Schulz would perform better than Gabriel as the SPD's candidate for chancellor.

Asked for their preference, if Germany's chancellor were picked by direct vote, INSA said 40.5 percent favored Merkel, well ahead of Schulz on 25.5 percent. A third had no preference in the INSA poll.

The sample was 1,009 voters questioned on Tuesday and Wednesday.

The head of Forsa, a Bonn-based survey institute, Manfred Güllner told the "Northwest-Zeitung" newspaper that Schulz had no clear political profile within Germany.

"He became known as president of the European Parliament. You can't win a federal (German) election with Europe [as a topic], Güllner said.

Schulz' political career stems largely from his posts held within the European Parliament since 1994.

Steinmeier is favored by Merkel's grand coalition government to become Germany's ceremonial head of state or president on February 12.

On Friday, current President Joachim Gauck is scheduled to hand Steinmeier his certificate of discharge and inaugurate Gabriel as replacement foreign minister.

Martin Schulz is replacing Sigmar Gabriel at the head of the SPD. DW explains how the change affects the current government and Germany's coming national election and assesses Schulz's chances of toppling Angela Merkel. (25.01.2017)