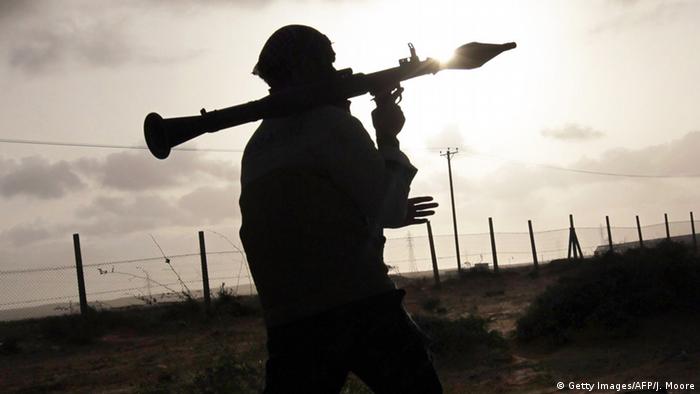 Russia's state arms seller Rosoboronexport announced in April the first contract to supply assault boats to a country in sub-Saharan Africa. The recipient's identity is concealed. What is known: It marks the first export contract of Russian-made final naval products to this region in the last 20 years. While this news might not have caught much international attention, this new deal adds up to a pattern: Russia is building its path to gain a foothold in Africa and broaden its export map for arms on the continent.

Once a major supplier during the Soviet era, Russia's role in Africa waned after the collapse of the USSR. But by 2000, Russia had made inroads again, and within the last two decades Russia has managed to become the biggest arms exporter to Africa. Currently, it accounts for 49% of total arms exports to Africa, according to the database of the Stockholm International Peace Research Institute (SIPRI).

Starting in 2015, Russia started selling arms to oil-rich Angola — mainly fighter aircraft and combat helicopters. The Angolan government in Luanda has long maintained strong ties with Moscow, dating back to the USSR. In 1996, Russia forgave 70% of Angola's $5 billion (€4.56 billion) in debt, which was mainly a result of several export credits the USSR had issued Angola for buying Soviet arms and military equipment. In the new millennium, Russia was a predictable choice for Angola to sign new arms deals — and within the last five years, Angola has become the third-biggest African client for Russian arms after Algeria and Egypt. Luanda's other suppliers are Bulgaria, Belarus, Italy and China, but their shares are small.

The situation was similar with Algeria, the largest importer of Russian arms on the African continent. Soviet-era connections allowed Russia to secure its monopoly on arms deals, and Moscow completely wrote off Algeria's $5.7 billion in debt in 2006. That same year, Algeria signed another arms deal to buy Russian weapons for $7.5 billion.

"Officials in these countries intrinsically look at Moscow from the Soviet-era links and Moscow has been able to maintain its influence. In some cases, like Algeria, it is done by debt release; sometimes by claiming that it will build repair facilities and manufacturing or maintenance facilities," says Paul Stronski, a senior fellow in the Carnegie Endowment's Russia and Eurasia Program.

Russia's growing interest in Africa is defined by not only economic, but also political and strategic reasons. Russia sees Africa as a key potential partner in the vision for a multipolar world order.

"Less European, less trans-Atlantic and focused more on rising powers and rising regions," Stronski said. This is where Russia's ties with countries like Zimbabwe and Sudan have been established, he stressed.

Zimbabwe has been subject to financial sanctions from the West since the early 2000s. The state was reportedly responsible for violence, tortures and killings of the president's opponents during the era of former President Robert Mugabe. Despite widespread international condemnation of Mugabe's regime, Russia stayed on the side of Zimbabwe: together with China, it vetoed the UN's Security Council resolution for an arms embargo in 2008 and criticized Western sanctions. Russia exports a number of both raw and finished materials to Zimbabwe, ranging from wood, wheat and fertilizers to printed materials, railway cars and electronics. Russia, in turn, imports coffee and tobacco from Zimbabwe.

Russian companies are also involved in diamond and gold mining projects in the country. According to Gugu Dube, a researcher at the Transnational Threats and International Crime program in the Institute for Security Studies (ISS) in Pretoria, Russia has been scaling up activities in the mining of resources such as coltan, cobalt, gold, and diamonds in several other countries across Africa. In Zimbabwe, Russian companies are also involved in a joint venture of the Darwendale project — mining and smelting one of the world's largest deposits of platinum group metal — for which production is planned in 2021. 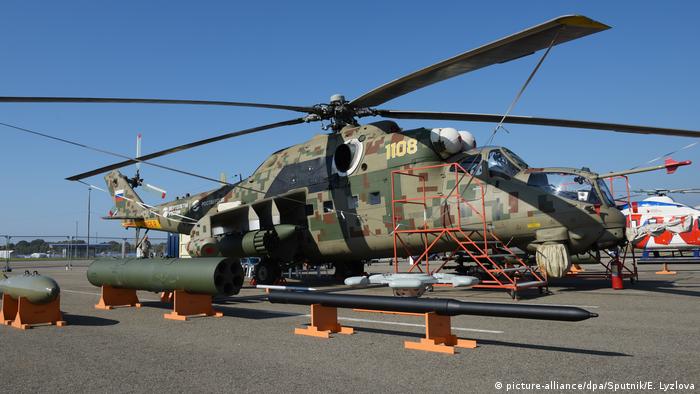 Russia hosted the first-ever Russia-Africa summit in Sochi in 2019 as a way of further identifying cooperation possibilities across the continent. During the summit, Russian President Vladimir Putin stated that "the strengthening of ties with African countries is one of Russia's foreign policy priorities".

Arms deals were at the center of attention at the summit. African delegates were invited to exhibitions of Russian weapons: from subsonic jet trainor Yakovlev Yak-130, the Pantsir missile system, and the Tor-M2KM surface-to-air missile systems to smaller arms including a new Kalashnikov AK-200 series assault rifle. This exhibition showed that Russia does not aim to offer disruptive new technologies in arms; instead, it focuses on improving the models that have been demanded the most.

These include aircrafts, missiles, tanks, air defense systems and artillery. For example, Algeria alone bought around 200 aircraft items from Russia from 2000 to2019, ranging from transporter helicopters to combat helicopters, bomber and fighter ground aircrafts. Various models of surface-to-air missiles (SAM) that are designed for destroying aircrafts or other missiles have been ordered from Algeria (several orders through 2000-2019), Burkina Faso, Egypt (several orders), Ethiopia, Libya and Morocco. Algeria also ordered tanks (more than 500 items in total), as did Uganda (67 items).

In Russia's publicly available strategy documents, such as its foreign policy concept or defense doctrine, African states are defined as belonging to an unstable continent and posing an international threat in light of terrorist groups' activities, particularly in the North African region. Such documents highlight Russia's aims to expand interaction with Africa by developing beneficial trade and economic relations and supporting regional conflict and crisis prevention.

This ongoing instability feeds a continuous market for arms — and for Russia, Africa represents a major market without a limit in the form of economic sanctions that came from the West after the annexation of Crimea. Africa is the continent where Russia can freely push one of the key elements of its exports: weapons. Arms trading accounts for 39% of Russia's defense industry revenue.

"Russian arms are good. It is universally recognized. Russian arms are also cheaper. There is no reason why African countries would not want to buy them," says Irina Filatova, a history professor at Moscow's Higher School of Economics and professor emeritus of the University of KwaZulu-Natal, who specializes in Russo-African history and relations.

In comparison to other big players, arms deals with Russia do not demand political or human rights conditions. In some cases, Russia has managed to fill the gap where European or American suppliers stepped out.

For example, in 2014, government soldiers in Nigeria were accused of human rights abuses against suspects in the country's fight against Boko Haram. Afterwards, the US cancelled a shipment of attack helicopters, even though the deal had already been signed. That same year, Nigeria placed an order and received six Mi-35M combat helicopters from Russia.

Egypt is a similar case. After a military coup in 2013, the US started cutting military aid and arms supplies to the country. This left Russia (together with France, another leading arms exporter) with an open opportunity; the country quickly intensified arms transfers to Egypt. From 2009 to 2018, Russia accounted for 31% of Egypt's imports of major weapons.

According to Kuimova, arms deals with Russia generally go fast. If a certain country needs weapons right away and Russia has them, Russia will be able to supply. What also plays in its favor is a lack of pressure from local civil society groups to track weapons sales. Russia's defense industry is secretive; the law does not oblige companies to report on arms exports as such, and usually this information falls under the state's secrecy laws. A general lack of data and transparency has created a situation where civil society groups for monitoring arms trading simply do not exist. 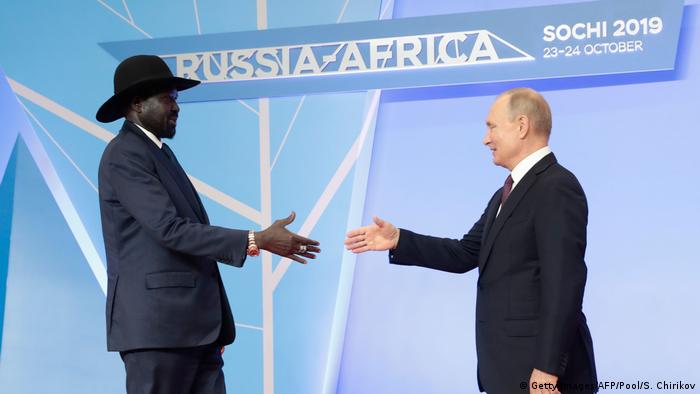 For now, Russia seems to be secure in its markets for arms in Africa. However, experts see the potential of China to become a bigger player for arms supplies in Africa. Currently, China accounts for 13% of arms exports to the continent.

"China has improved the quality and quantity of what it sells. They also do reverse-engineered Russian weapons. Since 2014, Russia has shared sensitive military technology as a part of its growing ties with China," Stronski said.

Kuimova adds that today China is able to produce and offer all kinds of arms. "China is generally growing as an arms exporter and shows similar patterns as Russia in a way of giving weapons with less political conditions," she explained.

Researcher Filatova does not see China as a threat to Russian arms in Africa, however — in her opinion, the main competitors for Russian arms will remain the same: the US and France. She defines China's interest in Africa as predominantly economic and says that "Russia's competition in Africa in that regard is already lost" — because economically, Russia is not able to offer what China can. Moscow instead focuses on natural resources exports and locking down arms deals. For arms importers, switching to other suppliers is costly, so the likelihood is high that Russia can ensure new deals with its arms buyers well into the future.