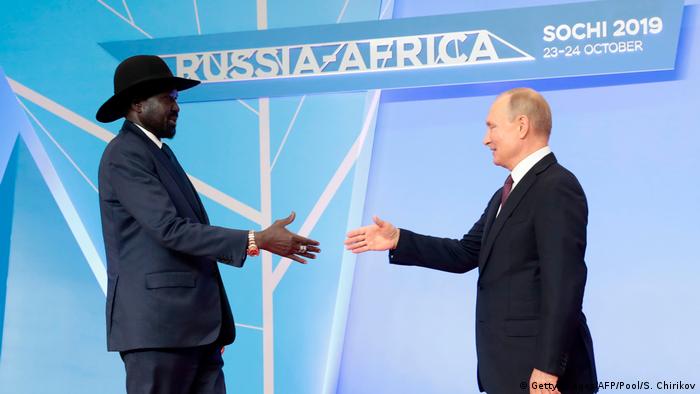 Part of Russia's intention is to export its nuclear technology to Africa by building expensive nuclear power plants across the continent. Putin's Russia also intends to boost military cooperation. Not a bad idea if it doesn't create more warlords in conflict zones.

Increasing arms sales to the countries that will sign military cooperation with Russia will only precipitate conflict in a continent that has already been ravaged by wars and conflict, like the case of South Sudan, where hundreds of thousands have been killed and millions displaced.

In any case Africa does not need such deals or cooperation that will bring more misery to its people. It should be about shared values, focusing on development projects, like vocational training and skills development. These kinds of projects are what Africa needs rather than military cooperation in exchange for natural resources.

Isaac Mugabi is an editor with DW's English for Africa program

Many sub-Saharan Africans live from hand to mouth; hence, military cooperation and nuclear power plants are meaningless to them. Providing solar panels for lighting and bio-gas-powered kitchens to households could be a cheaper and better option.

Equally, protecting a country's territory from foreign aggression is essential, but promoting peaceful co-existence among different communities along Africa's porous borders is the best way to avert conflict.

Putin's ambition, like he mentioned while opening the summit, is for Russia to double its arms exports that currently stand at $15 billion (€12.5 billion). He also said, "joint projects are underway in extractive industries, agriculture, healthcare, and education."

But unlike China and the United States, Russia doesn't have enough money to fulfill many of its promisesin other sectors apart from providing military machinery.

For many years Russia has dominated arms sales to Africa, and nowhere on the continent has it ever been an emissary of peace. Already on the sidelines of the summit Russia signed a deal to supply Mi-35 attack helicopters to Nigeria. Details of this deal remain scanty.

Since the Soviet era, Russia has had little interest in sub-Saharan Africa – perhaps it explains why the only country Putin has visited in the continent is South Africa. While meeting with Namibian President Hage Geingob, Putin touted prospects for Russia to help tap the country's vast uranium resources, diamonds, and other mineral riches. Geingob, in return, welcomed Russia to send military advisers to the country. Is Namibia at war with any of its neighbors for it to solicit services of Russian military advisors?

Putin is perhaps playing catch up with China and Europe, who have laid claim on countries with vast natural resources like the Democratic Republic of Congo, much to the chagrin of ordinary Africans.

The old generation can only remember in awe when Russia, during the Soviet era, supported independence movements, and trained Africans like in Angola and Ethiopia out of mutual friendship. But in today's world, it is quid pro quo.

is Russia's renewed interest in Africa a way to rekindle its lost relationship that blossomed in the 1960s and 70s? Or is it a new mutual partnership that will be devoid of any exploitation?

If it is business on a win-win basis, then well and good. But if it is about exploiting Africa's resources in return for nuclear power plants and war machines, African leaders should not let these deals see the light of the day.

The costs involved in building nuclear power plants in Africa and their maintenance could hugely affect the continent's ability to address its energy problems – using more affordable ways like renewable energies. With vast natural resources at its disposal, Africa should be able to produce energy without having nuclear plants.

There's a risk that by the time governments realize that it was a venture gone wrong, the debt owed to Russia will be so huge for them to service. It means that African leaders should as well quickly add Russia, after China, on the list of its future creditors.

The syndrome of countries in sub-Saharan biting more than they can chew should end if the continent is to prosper. Like China, Russia began by writing off external debts to a tune of $20 billion.

Ethiopia, as a former close ally, benefited immensely from this 'Samaritan' act by having its debt of over $160 million scrapped off. It means that Russia will have the upper hand when negotiating deals with the former at the summit.

Zambia, on the other hand, and as one of the countries that Russia wants to experiment with its nuclear power plant projects, seems not to have learned from its past mistakes. By the end of 2018, Zambia was chocking on external debt to the tune of $10 billion, according to figures from the International Monetary Fund. There are no signs that it will clear that debt anytime soon. African countries should boost regional cooperation and break down existing trade barriers instead of putting partnerships with developed economies at the core of their agendas.

Perhaps this will save the continent and lift it out of poverty, instead of its leaders rushing to western capitals in droves only to listen to speeches, and sign deals that will not have a direct impact on their people.