SIPRI: Weapons boom shows no signs of slowing | World | Breaking news and perspectives from around the globe | DW | 08.12.2019

Armaments production worldwide is continuing full speed ahead. According to a new study by a Swedish think tank, the 100 biggest weapons companies have once again increased their sales, with the US leading the way. 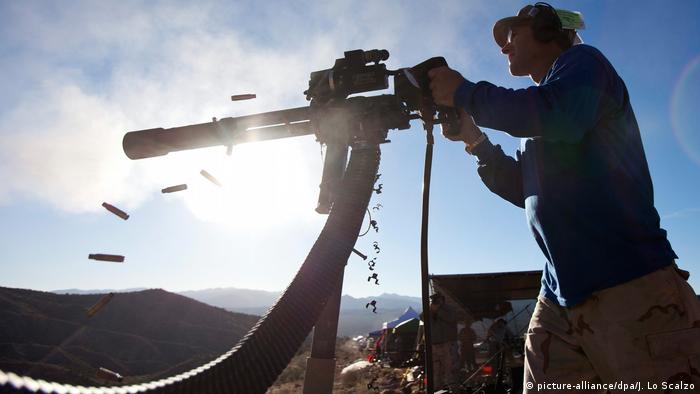 The world's 100 largest weapons producers and military contractors saw another boost in global sales last year, with total sales of $420 billion (€379 billion) — some 4.6% higher than in 2017.

2018 sales were even a whole 47% above those of 2002, according to a new study by the Stockholm International Peace Research Institute (SIPRI) on the global weapons industry. Because of the lack of reliable data, the study did not include China.

According to the study, released Monday, the increase in sales was due mainly to the five largest US arms companies. But European companies also saw a rise, though only of 0.7%, selling some $102 billion (around €92 billion) in arms and military equipment in 2018.

US firm Lockheed Martin is still unchallenged in first place. The company increased its sales in 2018 by 5.2%, representing 11% of the sales of the 100 biggest firms. The rise was largely the result of the sale of its F-35 fighter jet to the governments of the United States and other countries.

The second-largest company, Boeing, achieved sales to the tune of $29.2 billion. According to a paper from the Trump administration cited by SIPRI, its rise in sales resulted mainly from an "inter-state strategic competition."

The paper goes on to say that the US government sees its two biggest challengers as Russia and China, and that it remains committed to its 2017 pledge to expand its military weapons program.

A number of arms companies also underwent fusions in 2017, which resulted in increased sales a year later. The "spate of mergers and acquisitions indicates that US arms companies expect the programme to be technically challenging," said the SIPRI study.

Twenty-seven of the biggest armaments companies worldwide come from Europe, with the leaders in Western Europe based in the United Kingdom and France. The biggest British player is the mega-corporation BAE Systems, which employs more than 83,000 workers.

British companies saw a 2018 turnover of $35.1 billion, while French companies had sales of $23.2 billion. German arms manufacturers reported sales of $8.4 billion, a drop of 3.8% in their share of the international armaments industry.

The two trans-European companies Airbus and MBDA together achieved sales of $15.4 billion.

Russian companies had a turnover of $36.2 billion, thus making up 8.6% of worldwide weapons production. Despite the slight setback in 2018, their share of worldwide sales has grown continually since 2009, according to SIPRI.

"This was mainly because of Russia's increased spending on arms procurement linked to the implementation of a major military modernization plan for 2011–20 and, to a lesser extent, because of increases in arms exports," the study said.

Arms manufacturers from another eight countries — Israel, India, South Korea, Japan, Turkey, Australia, Canada and Singapore — round out the list of the top 100, representing $36.2 billion in sales.

Germany drastically cut arms sales to Saudi Arabia in the first six months of 2019 — but did not cut them completely. The government had pledged no more sales after the killing of journalist Jamal Khashoggi in 2018. (13.11.2019)