Nuclear-weapon powers continue to modernize their arsenals despite an overall reduction in warheads, a report has found. Reductions may slow if a US-Russia treaty is not renewed past 2021. 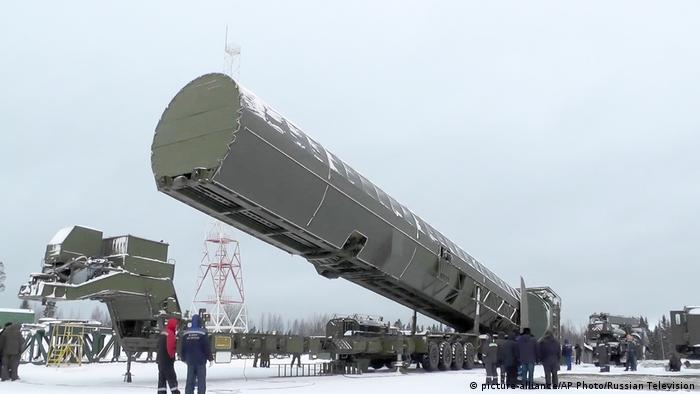 Nuclear powers are continuing to modernize their arsenals despite an overall decrease in the number of nuclear warheads, a Sweden-based peace research institute said Monday.

Nine nuclear-weapon powers — the United States, Russia, the United Kingdom, France, China, India, Pakistan, Israel and North Korea — had an estimated 13,865 nuclear weapons at the start of 2019, the Stockholm International Peace Research Institute (SIPRI) reported. Deployed warheads and those held in reserve or awaiting dismantlement are included in the estimate.

There are no talks planned between Moscow and Washington to extend New START once it expires in 2021.

"The prospects for a continuing negotiated reduction of Russian and US nuclear forces appears increasingly unlikely given the political and military differences between the two countries," said Shannon Kile, SIPRI's director of nuclear disarmament, arms control and non-proliferation program.

SIPRI highlighted a trend of Russia and the United States pursuing extensive and expensive programs to replace and modernize their nuclear arsenals, missiles and delivery systems.

"In 2018, the US Department of Defense set out plans to develop new nuclear weapons and modify others to give them expanded military roles and missions," SIPRI said in its briefing. "The nuclear arsenals of the other nuclear-armed states are considerably smaller, but all are either developing or deploying new weapon systems or have announced their intention to do so."

Nuclear rivals India and Pakistan, which have 130 to 140 and 150 to 160 nuclear warheads respectively, are increasing the size of their arsenals while also developing new systems.

"India and Pakistan are expanding their military fissile material production capabilities on a scale that may lead to significant increases in the size of their nuclear weapon inventories over the next decade," said Kile.

North Korea has an estimated 20 to 30 nuclear warheads, which SIPRI said was a priority for the country's national security strategy. However, it noted that North Korea has not tested a nuclear weapon or long-range ballistic missile since it entered into denuclearization talks with the United States in 2018.

Diplomats from 16 countries have convened in Stockholm to focus on the Nuclear Non-Proliferation Treaty (NPT). Their aim is to prevent the spread of atomic weapons, calling it "a danger to world peace." (11.06.2019)

The US announced its withdrawal from a landmark Cold War-era arms control treaty, with Russia following suit a day later. DW takes a closer look at the Intermediate-Range Nuclear Forces (INF) treaty and its signficance. (01.02.2019)