German Foreign Minister Maas has warned the UN Security Council of a potential arms race. He called for dialogue with nuclear powers to avoid that scenario. 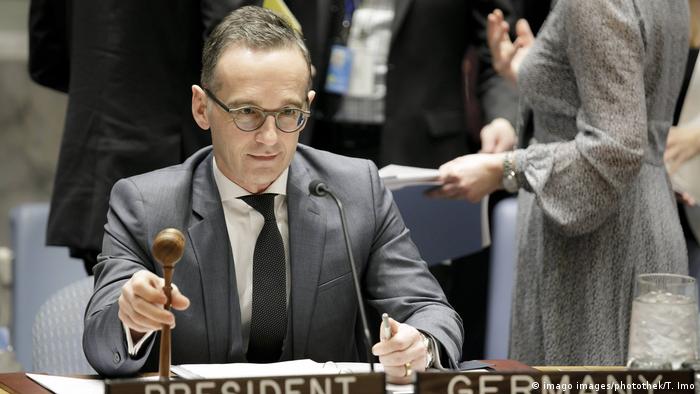 German Foreign Minister Heiko Maas, who led his second meeting as head of the United Nations Security Council on Tuesday, told representatives that "world peace is threatened by nuclear weapons."

Speaking in New York, he said that the ultimate goal of ridding the world of nuclear weapons was a "difficult topic," but added that this is exactly why it is important that the Security Council address it. The body has not dealt with the issue since 2012.

He said the task at hand was to "regain trust to attain the goal of a world without nuclear weapons."

Maas also warned that the trend toward more, rather than less, nuclear weapons could lead to a new arms race.

He specifically pointed to President Donald Trump's decision to withdraw the United States from the Intermediate-Range Nuclear Forces (INF) treaty with Russia, which was designed to limit land-based ballistic missiles. The US justified its withdrawal from the treaty by claiming that Russia had been violating it.

Although he voiced skepticism about the chances of rescuing the treaty, which is now set to expire on August 2, he implored Security Council members to look forward and develop a dialogue with other nuclear powers.

"The Cold War is over, the Warsaw Pact no longer exists, and there is no longer a wall in Germany. Thus, we cannot solve the problems that face us today with last century's answers."

Germany assumed chairmanship of the Security Council on Monday, and will lead the body for the month of April.