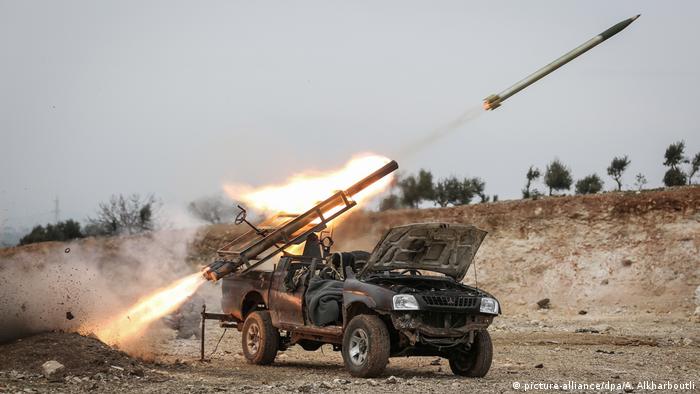 The world is in turmoil, and the global arms trade is flourishing. No country exports more military equipment than the United States. And no country buys more weapons than Saudi Arabia. These are just two of the findings in a new report released Monday by the Stockholm International Peace Research Institute, SIPRI, which analyzed trends over the past five years.

The report also showed that since 2015, 61% more weapons have been sold to the Middle East than in the preceding five years.

In an interview with DW, SIPRI armaments expert Pieter Wezeman commented that this was "of concern, considering the many conflicts in the region and also the risk of further escalation of conflict, for example between Iran and Saudi Arabia." 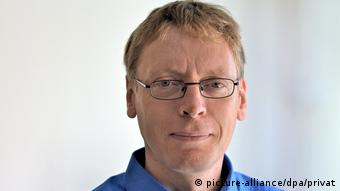 US, Russia and France: Top three in arms trade

The main supplier of weapons worldwide is still the United States, which has increased its arms exports by 23%. Saudi Arabia is its main buyer country, with Australia in second the United Arab Emirates (UAE) in third place. Overall, more than a third of all weapons traded worldwide are now manufactured in the US. 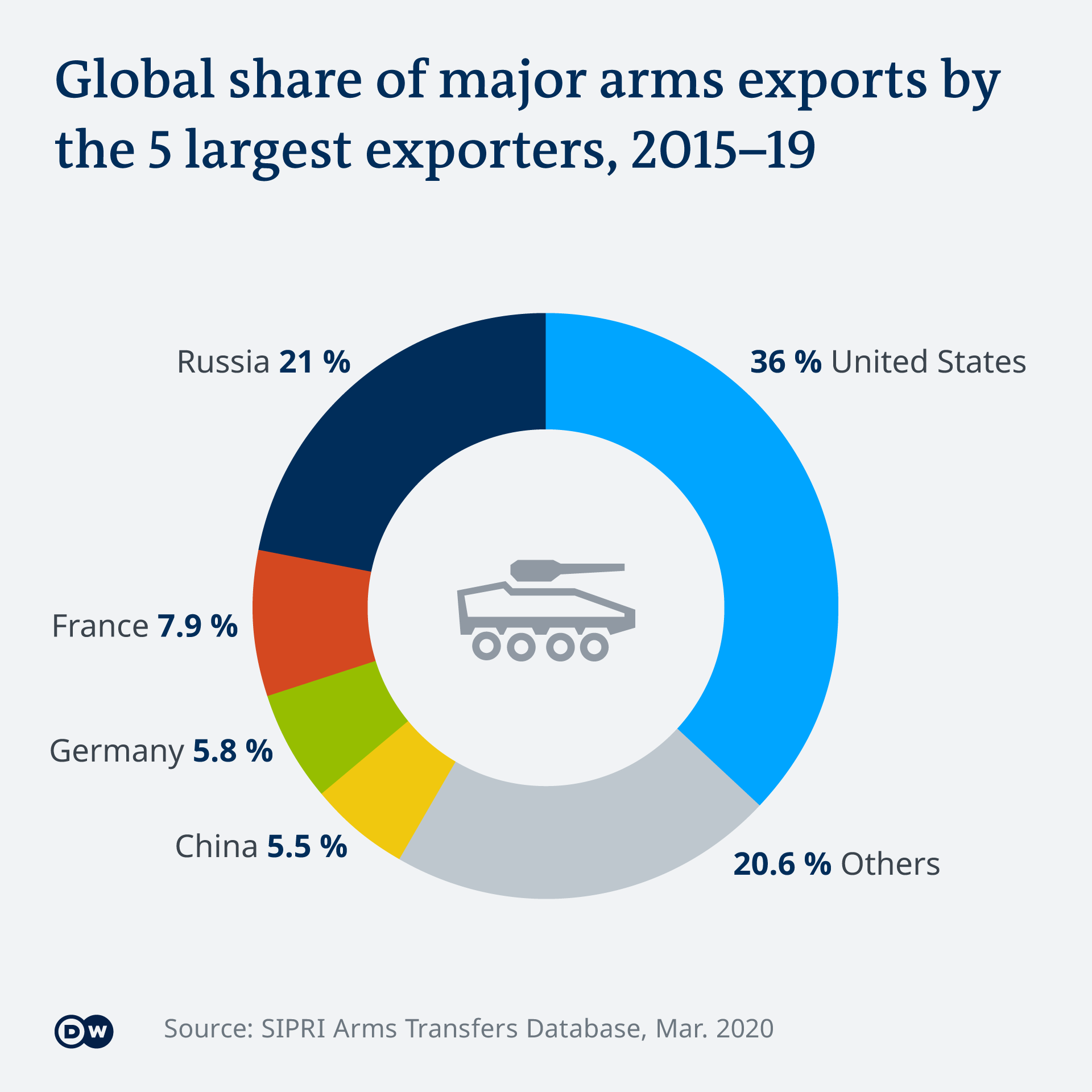 Wezeman emphasizes that one reason for this is that, "The US has, of course, a large arms industry. It's important for an arms industry to have as many clients as you can get, to make it as economically viable as possible."

Furthermore, the SIPRI researcher adds that Washington considers arms exports "a significant part of [its] foreign and security policy. They export arms to make friends, to create allies and to ensure that they can cooperate with other countries in military operations."

Russia is still the second biggest arms dealer in the world, but the gap is increasing: The country's sales have dropped by 18% over the last five years. France has established itself as the third-biggest arms dealer, exporting 72% more military equipment from 2015-2019 than in the previous five-year period.

Political scientist Max Mutschler, of the Bonn International Center for Conversion (BICC). a German peace and conflict research center, ties this increase to the commercial success of France's Rafale fighter aircraft, among other things. "Some big deals were done with this, in particular with Egypt, Qatar and India. And when you're selling very complex, ultramodern weapon systems like that — especially in the field of fighter aircraft, but also with warships — then of course there's a massive increase in the sums of money involved," Mutschler explains. 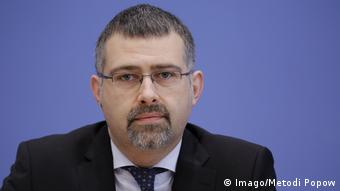 Germany continues to rank fourth among the world's most important suppliers of arms, making it one of the five countries whose exports account for more than three-quarters of global trade in military equipment. Despite this, the German government likes to say it pursues a "restrictive" arms export policy.

However, between 2015 and 2019 Germany's exports rose by 17%, even though Saudi Arabia, formerly a major customer for German armaments manufacturers, was blacklisted in the fall of 2018; Germany stopped exporting arms to Saudi Arabia in response to the murder of the Saudi journalist Jamal Khashoggi. 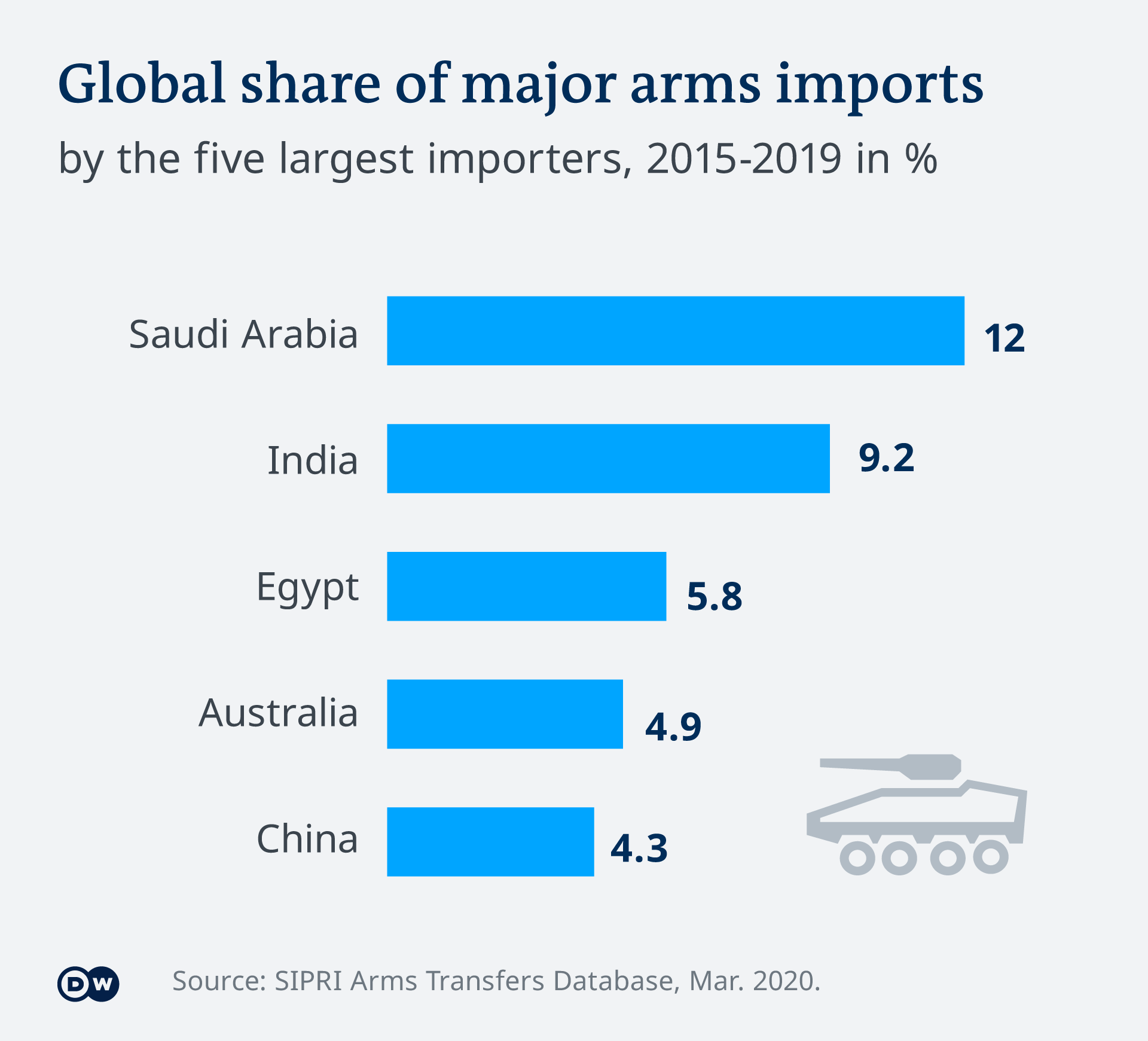 In addition to the increase in German arms exports, BICC expert Mutschler was struck by something else: NATO-member Germany is also supplying significant quantities of arms to non-NATO countries, or so-called third countries. Mutschler points out that, "In the current SIPRI report, we have Algeria, for example, in third place as the third largest recipient state," following South Korea and Greece.

Qatar and Egypt have also been important recipients of German arms exports in recent years, Muschler says. With the exception of 2019, over the last few years third countries have always accounted for more than 50%, he explains. "And this has also included third countries that are problematic — because of their human rights situation, because of wars in neighboring countries such as Yemen."

"In my opinion, it's extremely euphamistic to describe this as 'restrictive,'" he adds.

A glance at the German government's latest arms export report from November 2019 confirms this. In the first half of that year, arms exports worth more than €800 million ($913 million) were approved for Egypt. These included missiles, rocket parts, and target acquisition systems. The sale of tracking radar to the UAE, which was actively involved in the bloody war in Yemen for years, was also approved.

Armin Papperger, CEO of Germany's largest armaments company, Rheinmetall, was delighted by what he called a "supercycle" in the armaments industry and announced a jump in profits. Papperger described this as an "exceptional time for the procurement of weapons, ammunition or vehicles." 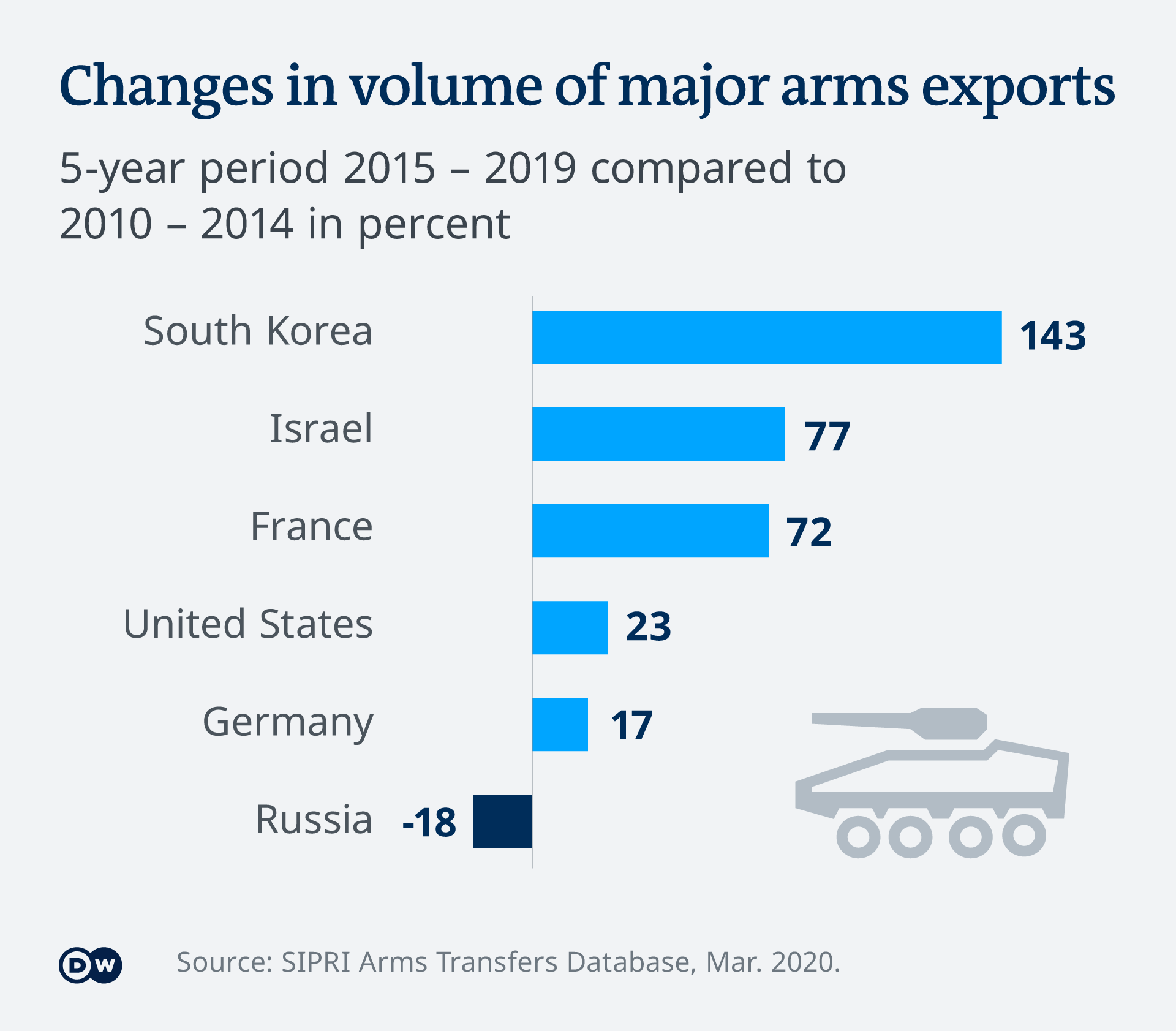 The defense company, number 22 in the global trade in military equipment, benefits from the fact that many countries feel they are lagging behind on their military procurement and are allocating large budgets to catch up — not only those within NATO, who are working toward the alliance's 2% target for military spending.

The SIPRI researchers' annual reports focus on long-term international trends. Their data is calculated according to the volume of arms deals, not the financial value. The SIPRI report therefore works with market shares and variations, which are expressed as percentages. It does not show absolute figures for arms transfers in euros or dollars.

When asked, SIPRI expert Wezeman puts the volume of the international arms trade at around $80 to 100 billion (€70 to 87 billion) per year. This means that trade in military equipment accounts for less than 1% of global trade, he explains.

China has been ranked as the world's second-largest weapons manufacturer, according to new research by a leading peace institute. The Asian superpower jumped ahead of Russia, from whom they used to buy many weapons. (27.01.2020)

Iran's foreign minister fiercely criticized the US and proposed talks with his country's Arab neighbors at the Munich Security Conference. But Saudi Arabia declined — unless Iran changed its behavior. (16.02.2020)

Armaments production worldwide is continuing full speed ahead. According to a new study by a Swedish think tank, the 100 biggest weapons companies have once again increased their sales, with the US leading the way. (09.12.2019)