The German leader says NATO is even more essential to Germany and Europe now than during the Cold War. 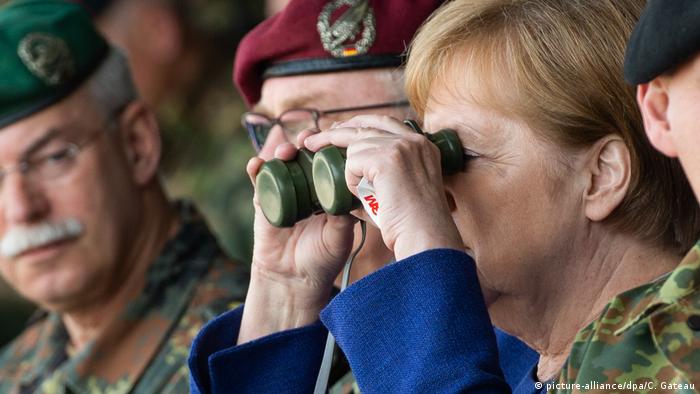 Chancellor Angela Merkel on Wednesday underscored her commitment to NATO, pledging to raise Germany's defense spending to the alliance's 2% target "by the early 2030s."

"The preservation of NATO is in our own interest, more than during the Cold War," Merkel said while addressing lawmakers in German parliament.

"At the moment, Europe is unable to defend itself," she added, urging the bloc to stay together.

Merkel's announcement comes days before NATO meets for a summit as the alliance marks its 70th anniversary.

Earlier in November, French President Emmanuel Macron said NATO was "experiencing brain death," a comment that German leaders have distanced themselves from.

Merkel said NATO has been a "bulwark for peace and freedom." Highlighting Washington's changing role in foreign policy, she said that "the United States no longer automatically takes up responsibility when it's burning around us."

Beyond NATO's direct budget, member states of the alliance came to an agreement in 2014 that each of the states will increase their own defense spending to 2% of their respective gross domestic product by 2024.

Merkel's vow is likely to please US allies. Ahead of the German leader's address to the Bundestag on Wednesday, Robert O'Brien, the national security counselor to US President Donald Trump, welcomed Germany's commitment to NATO, in an interview with the German daily Bild.

"There’s some good news with respect to the US-German relationship when it comes to NATO. Number one, the fact that Germany is increasing its funding and the US is decreasing its funding, so the US and Germany will fund NATO at parity," he said.

Germany's NATO defense expenditure as a share of GDP is roughly 1.36% in comparison to 3.42% in the US.

Trump had tweeted last year that "the United States is spending far more on NATO than any other country. This is not fair, nor is it acceptable."

While O'Brien acknowledged the pledge is a step in the right direction, he said: "It would be great if Germany took up its role as one of the leaders of the world." As an economic power house, "Germany has a duty to invest appropriately in defense for the benefit of its own defense and the defense of its alliance partners," he said.