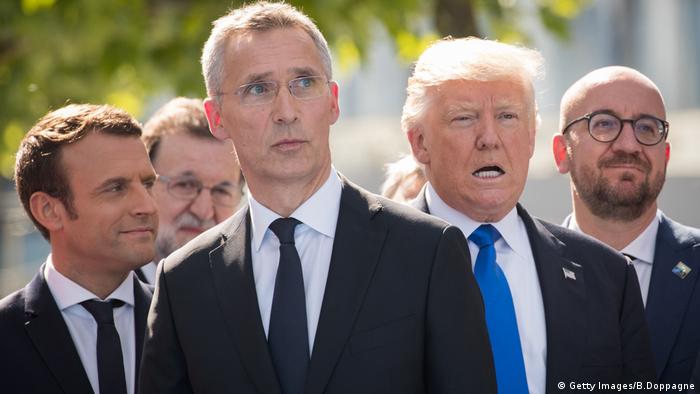 Macron's sharp criticism stirred debate in Washington and European capitals ahead of an early December leaders' summit in London.

Stoltenberg said Tuesday that the best way to address any differences "is to sit down and discuss them and to fully understand the messages and the motivations."

"My message is that NATO is adapting, NATO is agile, NATO is responding," he told reporters ahead of a NATO defense ministers meeting on Wednesday.

"What we are currently experiencing is the brain death of NATO," Macron told the Economist Magazine, going on to question the alliance's mutual defense clause and the commitment of the United States.

"You have partners together in the same part of the world, and you have no coordination whatsoever of strategic decision-making between the United States and its NATO allies. None," Macron said. "Strategically and politically, we need to recognize that we have a problem."

The French leader's comments came after the United States abruptly pulled troops out of northeastern Syria, allowing NATO member Turkey to launch an incursion against Kurds fighting against the "Islamic State" group.

The United States and Turkey did not coordinate their moves with NATO members.

How did NATO partners react?

"NATO is absolutely essential if we are going assess the risks that we face all together and the thought of only one of our countries, or one of our groups of countries, facing the enormous risks to our populations alone is not even rational.''

Macron's comments were widely criticized by other NATO members in the days after they were made.

Eastern European members of the alliance concerned about Russian aggression were similarly shocked by Macron's position and his suggestion that there be a rapprochement with Moscow.

Macron's comments, as well as Turkey's purchase of Russia's S-400 missile system, are likely to overshadow the defense ministers meeting on Wednesday in Brussels and the December 3-4 gathering of leaders.

NATO is a "decisive cornerstone" of security, but getting the Germans to recognize its importance is another battle, said German Defense Minister Annegret Kramp-Karrenbauer, speaking on the military alliance's future. (12.11.2019)

A French presidential adviser said it's time for China to prove its openness to trade with "progress on the EU-China deals." European businesses have long complained of restricted access to China's market. (04.11.2019)