Discussions between Turkey and the United States were dominated by Syria and Ankara's purchase of Russia's S-400 missile system. Relations between the NATO allies are at historic lows. 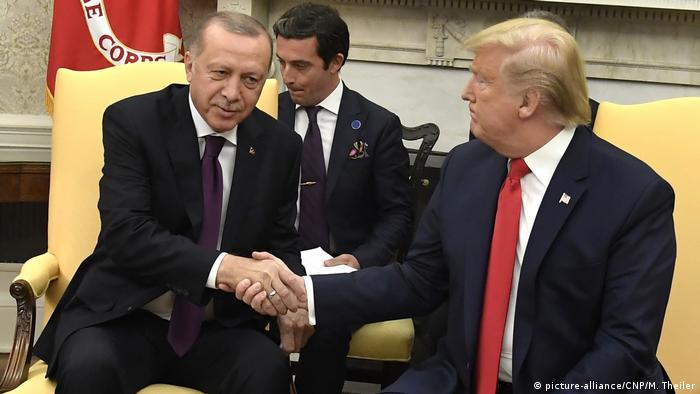 US President Donald Trump on Wednesday met with his Turkish counterpart Recep Tayyip Erdogan at the White House, where they sought to put on a show friendship despite deep divisions between the two NATO allies over Syria and Ankara's purchase of a Russian missile system.

"We've been friends for a long time, almost from day one. We understand each other's country. We understand where we are coming from," Trump told Erdogan in the Oval Office.

Despite the warm welcome, the two NATO allies have been at odds for years over a host of issues that have sent relations plummeting to historic lows.

The latest blow came last month when the Turkish military and a hodgepodge of allied rebel factions launched a long-threatened cross-border operation in northeast Syria against Washington's Kurdish partners in the fight against the "Islamic State" group, forcing the US to withdraw forces from the border region and unleashing a humanitarian disaster.

Months earlier, the US was angered over Turkey's purchase of the Russian S-400 missile defense system, which Washington says is incompatible with NATO and threatens F-35 fighter jets. In response, the US kicked Turkey out of the F-35 fighter jet program, in which Ankara was a partner.

Lavishing praise over the authoritarian Turkish leader at a press conference, Trump said he was "a big fan of the president" and the two had "wonderful and productive" encounter.

The gushing comments, however, stood in sharp contrast to the mood in Congress over Turkey's latest military operation in Syria and the delivery of Russian S-400s over the summer. A group of five Republican Senators, including critics of Turkey, joined the meeting at the White House.

"Turkey's acquisition of sophisticated Russian military equipment, such as the S-400, creates some very serious challenges for us and we are talking about it constantly," Trump told a joint news conference.

"We talked about it today, we're talking about it in the future, hopefully we'll be able to resolve that situation."

The White House later said in a statement that in order to make progress on other issues battering bi-lateral relations it was "vital" to resolve the S-400 issue.

Erdogan said he believed the two sides could resolve an issue that has been at the top of the agenda over the past year.

"We can overcome the tests we are facing, particularly regarding the S-400 system and F-35, only through dialogue," Erdogan said.

He said that Turkey can buy US Patriot missiles "if offered with the desired conditions," referring the price tag.

Trump said a ceasefire between Turkey and the US-backed Syrian Kurdish YPG militia in northeast Syria was widely holding, despite continued fighting on the ground.

"I know the ceasefire, while complicated, is moving forward at a very rapid clip,"' Trump said.

The Turkish miliitary operation against the US-backed Syrian Democratic Forces, the main component of which is the Kurdish YPG, has displaced nearly 300,000 people. It has also given Turkey and its rebel allies control over swaths of northeastern Syria where it plans to relocated nearly 1 million Syrian refugees currently in Turkey. Syrian Kurds say the plan amounts to demographic engineering and ethnic cleansing.

Erdogan said his country had no problem with "the Kurds," only terrorist organizations. Turkey considers the YPG to be an extension of the Kurdistan Workers' Party (PKK), which has fought a nearly four decade war against the Turkish state.

Erdogan said his country had spent $40 billion hosting Syrian refugees and expected international donors to assist in relocating Syrians back to their country. European governments have squashed the idea of funding the forceful repatriation of refugees.

"I think that frankly Europe should be paying for this to a large extent. As of this moment Turkey's been paying for most of it," Trump said of the costs Turkey bear hosting refugees.

The EU already has a refugee deal with Turkey that pledges €6 billion in aid, about half of which has been distributed.

Erdogan has repeated threatened to "open the gates" to Europe for refugees.

Turkish President Recep Tayyip Erdogan hopes the US will not decide to scrap the F-35 fighter jet program as a result of its air defense deal with Russia. Erdogan is set to meet with President Trump later this month. (12.06.2019)