The French president has urged European allies to "wake up" and reassess the reality of what NATO is in the Trump era. When asked whether he still believed in collective defense, he said: "I don't know." 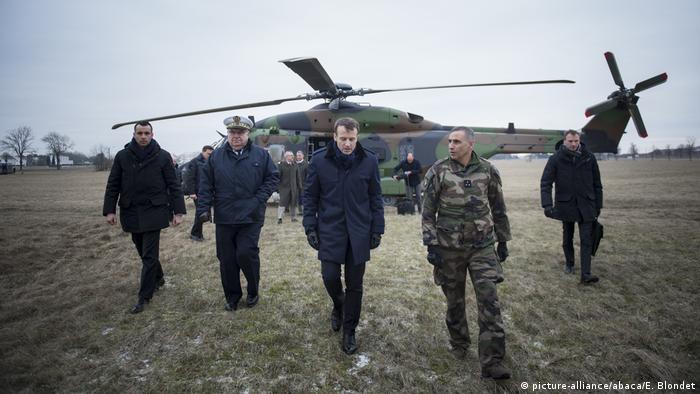 French President Emmanuel Macron has called on European allies to "wake up" to the realities of the transatlantic alliance before it's too late.

"What we are currently experiencing is the brain death of NATO," Macron said in an interview published Thursday by British news magazine The Economist. Alliance members "should reassess the reality of what NATO is in light of the commitment of the United States."

Macron criticized NATO member Turkey's military operation against the Western-allied, Kurdish forces that helped defeat the "Islamic State" in Syria and the US decision to withdraw troops from the region without consulting NATO allies.

"You have partners together in the same part of the world, and you have no coordination whatsoever of strategic decision-making between the United States and its NATO allies. None," Macron said. "Strategically and politically, we need to recognize that we have a problem."

When asked whether he still believed in "collective defense" as outlined in Article 5 of the NATO Treaty, he replied: "I don't know."

US President Donald Trump has threatened to "moderate" Washington's commitment to NATO if members fail to meet a 2% of GDP defense spending target. Alliance members had agreed in 2014 to "move towards the 2% guideline within a decade."

The French president warned that Europe will "no longer be in control of our destiny" if it fails to recognize its strategic relevance as a geopolitical power.

Macron's remarks are a long way from those made by German Defense Minister Annegret Kramp-Karrenbauer a day earlier, in which she described the alliance as a cornerstone of modern Europe.

"NATO is and will remain the anchor of European security," Kramp-Karrenbauer said at a private event with NATO chief Jens Stoltenberg. "But it is also clear that Europe must increase its own complementary ability to act."

The German defense minister has pledged to bump defense spending in Germany to 1.5% by 2024 and 2% by 2031. If Germany goes through with the pledge, it could become the third-largest defense spender in the world, behind the US and China.

French President Macron and Chinese leader Xi have announced fresh trade contracts worth $15 billion amid the ongoing trade war between the US and China. Macron and Xi also agreed to double down on climate change. (06.11.2019)