Majority of Germans want Turkey kicked out of NATO: survey

A new survey shows that 58% of Germans want Turkey expelled from NATO over the recent military offensive in Syria. There is even stronger German support for economic sanctions and export bans against the country. 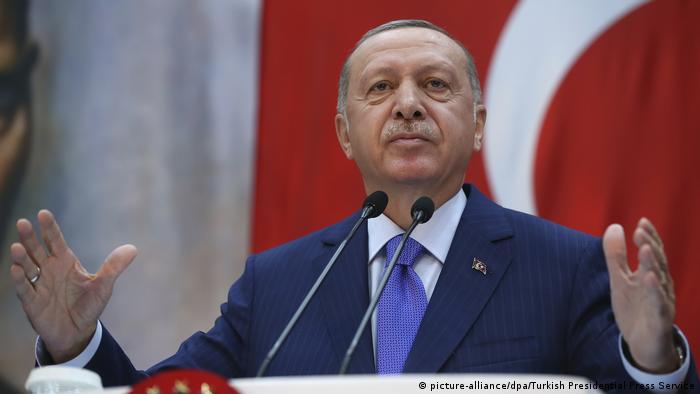 A majority of Germans believe that Turkey should be expelled from NATO over Ankara's military offensive in northern Syria that began in October, according to a survey released on Tuesday.

The YouGov survey, commissioned by news agency dpa, interviewed over 2,000 adult Germans between October 25 and 28 and found that that 58% believe Turkey should be removed from the North Atlantic Treaty Organization (NATO), the intergovernmental military alliance of 29 European and North American countries. Only 18% were against the idea.

A larger proportion of Germans wanted the German government to take a tougher stance against Turkey, with 61% in favor of economic sanctions against President Recep Tayyip Erdogan's country while 69% supported a complete ban on arms exports.

No process for NATO expulsion

The German government has limited arms sales to Turkey since Erdogan launched the military offensive in northern Syria on October 9 — but there is no total ban on arms sales to the country, as previously vowed by German Chancellor Angela Merkel.

While NATO's founding charter allows for a member to quit the military alliance, there is no mechanism that spells out how a country can be booted out by other states in the alliance. Removing a country from NATO would be a complicated and lengthy process that would need the approval of, and ratification by, all member countries.

In Germany, many politicians from the Left party have also called for Turkey's expulsion, and the acting chairman of the center-left SPD parliamentary group, Rolf Mützenich, has similarly called Turkey's membership into question.

Additionally, at least week's NATO meeting, members emphasized Turkey's strategic importance as a bridge between East and West. Turkey also has the second largest army in NATO, after the US, making it a significant contributor to the defense alliance's military capabilities.

Tensions between Ankara and the NATO partners have steadily increased in recent months, such as when Ankara purchased and began receiving the Russian-made S-400 missile system earlier this summer.