Germany plans military spending hike, but is it enough to appease NATO? | Germany | News and in-depth reporting from Berlin and beyond | DW | 06.02.2019

Germany plans military spending hike, but is it enough to appease NATO?

The German government has presented its military budget report to NATO. A spending hike is planned, but economic concerns and political uncertainty may leave allies questioning Germany's commitment to the alliance. 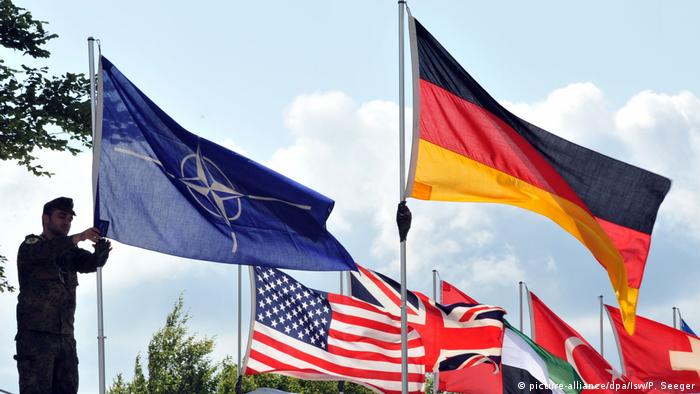 In its yearly financial report on military capacity and engagement to NATO, Germany promised to increase expenditures to more than 1.5 percent of gross domestic product by 2024. That goal fails to satisfy the alliance's agreed spending benchmarks and could ultimately be politically tricky to implement at home in the wake of new financial forecasts.

As a result, German Defense Minister Ursula von der Leyen will likely face difficulties in selling her country's commitment to the alliance when she meets her fellow NATO defense ministers in Brussels on February 13 and 14, Henning Riecke, head of the program on trans-Atlantic relations at the German Council on Foreign Relations (DGAP) in Berlin, told DW.

"The situation as of now is that we're still short of having enough money in our hands to live up to the promises that we made," he said. "In the end, it would look like Germany is dodging its own promises."

The plan, known as the "Strategic Level Report," envisions an 80 percent increase in defense spending between 2014 and 2024, or €27 billion ($31 billion) in absolute figures. That would bring Germany's total military expenditures to €60 billion by 2024.

"It's a clear political agreement: 1.5 percent [of gross domestic product] for the year 2025," von der Leyen told reporters on Monday while visiting German NATO missions in the Baltics. 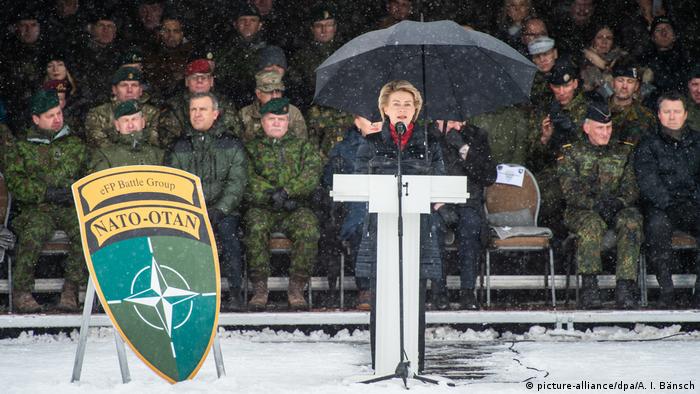 When NATO defense ministers meet next week, however, von der Leyen's confidence in Germany's spending trajectory may be blown off course by political realities in Berlin and the United States.

Even if the German government's new commitments go ahead as planned, the country's military expenditures will still fail to meet members' benchmark to allocate 2 percent of GDP for defense by 2024, a target agreed upon by NATO members during their summit in Wales in 2014.

That will undoubtedly place Berlin in the crosshairs of US President Donald Trump, who has threatened to pull his country out of the alliance if fellow member don't open up their wallets. The US currently spends roughly 3.5 percent of its GDP on defense.

In justifying Germany's spending, officials in Berlin have pointed to the country's energetic engagement in NATO training initiatives and formal deployments in conflict zones such as Afghanistan, as well as its nonmilitary developmental measures within the alliance.

"In these times of hybrid warfare, I would prefer a discussion that considers those nonmilitary measures that also contribute to the defense readiness of NATO," Carlo Masala, a professor of international politics at the Bundeswehr University in Munich, told DW. 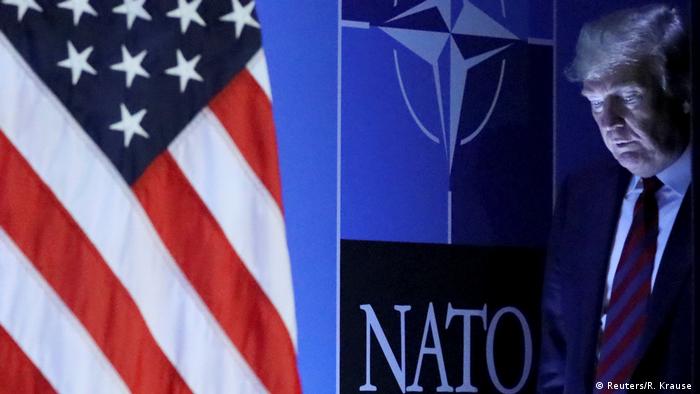 Germany's military, the Bundeswehr, is one of the largest in NATO. It's located centrally in Europe and its capability to deploy troops exceeds other more geographically isolated NATO members with larger defense budgets, such as Greece.

Thus, Berlin's plans to bolster operational military divisions by 2032 for speedier troop deployment are an effort to play to its strengths and prove its commitment to the alliance, said the DGAP's Riecke.

"The Germans really aren't spending as much as they should, but they create a lot of extra value for NATO — that's something we really want to sell," he said. "But it might not work because Trump needs to deliver his campaign promise that those countries spend 2 percent of GDP, or we're out."

Intergovernmental bickering in Berlin could also call into question Germany's commitment to NATO in the eyes of its allies.

German Finance Minister Olaf Scholz believes lackluster economic forecasts mean Germany will collect as much as €25 billion less in taxes by 2024 than initially anticipated, according to a new Finance Ministry report. Furthermore, predicted economic growth for the year 2020 has been reduced to 1 percent from 1.8 percent. 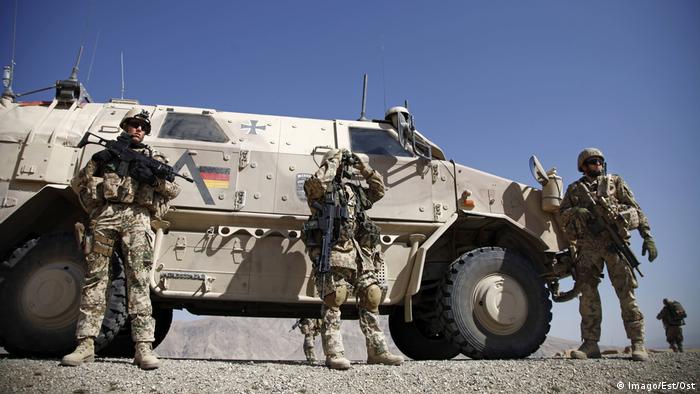 The Bundeswehr is part of the NATO mission in Afghanistan

Meanwhile, large state expenditures — such as the departure from coal-fired energy, new pension schemes for the country's aging population, and continued spending on integration and resettlement programs for Germany's more than 1 million refugees — mean spending tens of billions of euros more on defense to appease NATO allies might be a step too far politically, particularly if the government remains committed its financial hallmarks of a balanced budget and creating no new debt.

"We are at the very beginning of these plans," Finance Ministry spokesperson Jeanette Schwamberger told reporters. "I cannot anticipate when this will end."

Though German capacity building with NATO is more important than euros spent in the grander scheme of things, "it won't help Germany any" in convincing fellow members, especially the US, of its commitment to the alliance, the European Council on Foreign Relations' Gustav Gressel told DW.

The lack of political, financial and ideological unity out of Berlin is a recipe that will only "signal Germany's weakness" to other NATO members, said the Bundeswehr University's Masala.