Germany is reportedly expected to collect less tax revenue over the next five years. The shortfall casts doubt on whether the government can meet NATO defense spending goals and avoid the ire of its allies. 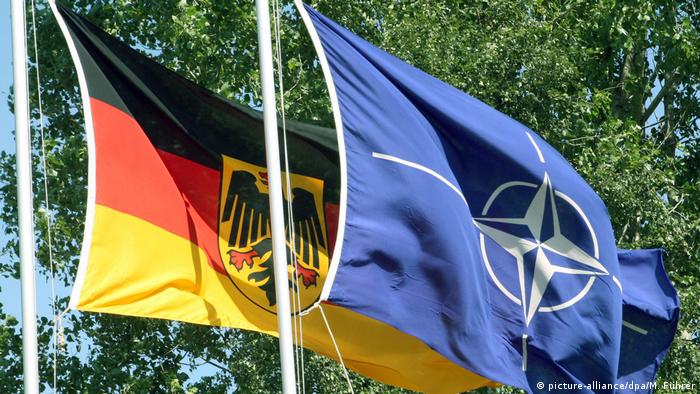 Germany will meet its pledge to boost military spending to 1.5 percent of economic output by 2025, Defense Minister Ursula von der Leyen said Monday, following reports that a budget gap could undermine that goal.

The Finance Ministry estimates that Germany would need to allocate far more money to defense spending than it already has in order to raise the defense budget to 1.5 percent of economic output by 2024, according to an ministry analysis seen by Reuters and DPA news agency.

The analysis reportedly also predicts a €25 billion ($28.6 billion) shortfall in tax revenues up until 2023 due to a slowing economy.

Germany is under pressure from the United States and other NATO allies to increase spending to 2 percent of GDP in line with an alliance agreement struck in 2014. Last year, the government promised NATO allies that it would meet 1.5 percent by 2024.

Spending on the military has been a source of tension between Germany's ruling coalition, with Scholz's Social Democrats (SPD) opposing demands from Chancellor Angela Merkel's conservatives (CDU/CSU) for a rapid rise in the defense budget.

Defense Minister Ursula von der Leyen, a CDU member, said during a visit to Latvia that coalition partners had been "clear" in their commitment to boost military spending to 1.5 percent of GDP.

Budget talks had just begun and would be completed by March, she added.

Military spending rose to 1.24 percent of GDP in 2018 from 1.18 percent the year before. However, current budget plans have defense spending reaching only 1.23 by 2022.

Reaching the 1.5 percent target could prove politically difficult because it would likely require shifting money from other government programs to the military.

The German government maintains a policy known as the "schwarze Null" ("black zero"), which requires a balanced budget and no new net borrowing.

Politicians in Berlin said they needed more time to decide how to replace an ageing fleet that must be nuclear capable. The Bundeswehr faces pressure to purchase European-made planes, though it favors American models. (01.02.2019)