NATO is a "decisive cornerstone" of security, but getting the Germans to recognize its importance is another battle, said German Defense Minister Annegret Kramp-Karrenbauer, speaking on the military alliance's future. 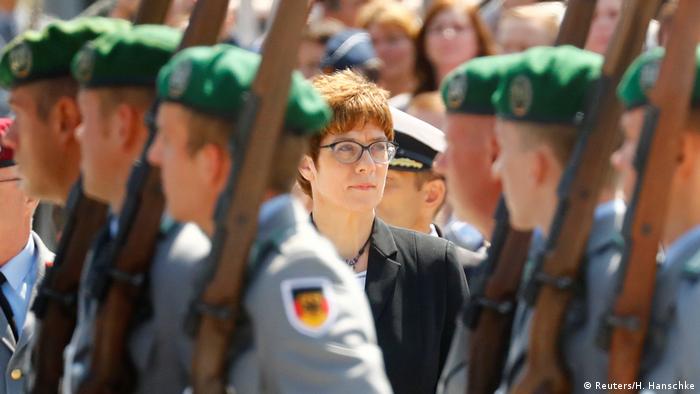 German Defense Minister Annegret Kramp-Karrenbauer has spoken out in defense of NATO at a conference in Berlin, challenging French President Emmanuel Macron's earlier controversial assertion that the organization was "brain-dead."

"NATO remains a decisive cornerstone," said Kramp-Karrenbauer, speaking at the annual 'NATO Talk around the Brandenburger Tor' event on Monday.

It was also important to explain to the German public why the country needed to play a more active role in international security matters, Kramp-Karrenbauer said.

But she admitted that discussions of security matters "win no popularity contests," saying that the German public would need a "weaning" period to get used to the idea of the nation wielding a larger military influence.

Read more: Why has Macron taken the lead in NATO-bashing?

Wolfgang Ischinger, chair of the Munich Security Conference and formerly German ambassador to the US and deputy foreign minister, also contested Macron's assertion at the conference.

"Our American partners have increased their presence in Europe. They are planning a big exercise next year, bigger than any exercise before. So we can't call it brain-dead," he said.

The comments by Kramp-Karrenbauer and Ischinger joined Merkel and other prominent German voices, who last week spoke out after Macron said a lack of US leadership had rendered NATO effectively "brain-dead."

However, Ischinger also appeared to support Macron's stance on leadership matters, saying, "If I were the one sitting at the Elysee [Palace], I'd be concerned about NATO partners who are not coordinating with others."

This appeared to be a reference both to the United States, which pulled forces out of Syria without warning NATO partners in the region like the UK and France, and to Turkey, which then immediately sent its military into the area.

The French president has criticized both of these countries for their actions, with his comments following soon after.

In the tweet, Kramp-Karrenbauer — also known as AKK — added: "For decades we've profited from our allies being responsible for our safety. I want to close the gap between our often-formulated claims and our actual actions in the politics of security."

In her speech, she argued that Germany should aim to provide 10% of all military capabilities at NATO's disposal by 2031 — the same date she hopes Germany will reach its 2% spending commitment.

DW's Seda Serdar in Berlin contributed to this report.

US Secretary of State Mike Pompeo has begun an official visit to Germany. Relations between the NATO allies are at a low, but a recent announcement by one of Angela Merkel's ministers seemed to nod to US complaints. (07.11.2019)