US Secretary of State Mike Pompeo has begun an official visit to Germany. Relations between the NATO allies are at a low, but a recent announcement by one of Angela Merkel's ministers seemed to nod to US complaints.

The fall of the Wall: Ex-World Bank chief Zoellick remembers

In the week marking the 30th anniversary of the fall of the Berlin Wall, bilateral ties between the US and Germany on Thursday could not have been a starker contrast to the cooperation of 30 years ago.

But despite the plethora of disputes that have led to increasingly sour relations in recent years, US Secretary of State Mike Pompeo and his German counterpart, Foreign Minister Heiko Maas, made the effort in Leipzig to reiterate their commitment to transatlantic relations.

Speaking at a press conference in the eastern German city, Maas thanked the US for its contribution to German reunification. "Without the leadership of America, there would have been no reunification," Maas said. "We owe our freedom and our unity to you."

In return, the US top diplomat said Germany had been a great partner, particularly in "attempts to denuclearize North Korea and ... to achieve democracy in Venezuela. Both countries share common principles, Pompeo added, "even if we might take different approaches."

The controversial Nord Stream 2 gas pipeline, 5G technology, and not least of all defense spending are all likely to be on the agenda.

In a speech Thursday at the Bundeswehr University in Munich, Kramp-Karrenbauer noted that allies are increasingly asking for Berlin to play an active role in global security and pushed for Germany to do so.

"A country of our size, with our economic and technological power, our geostrategic position and global interests, cannot just stand on the sidelines and watch," she said in Munich. "Germany must participate in international debates and drive them forward." 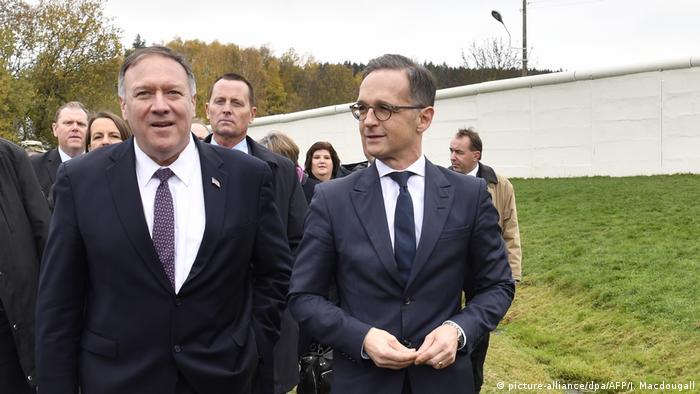 The top US diplomat's visit to Germany is his second since taking office in 2018, but Germany is far from unfamiliar territory to the 70th US secretary of state. In the 1980s, Pompeo patrolled the Berlin Wall before serving as a tank commander at Bavarian base in what was then West Germany.

During the Cold War, Mödlareuth was divided between East and West Germany, with one of the most heavily guarded borders in the world running through it for 28 years. Today, the village straddles the border between the states of Thuringia and Bavaria.

Prior to meeting Maas, Pompeo met with US troops currently stationed in the Bavarian towns of Grafenwöhr and Vilseck to witness a live drill. The US has around 35,000 soldiers remaining in Germany.

Read more: The US military presence in Germany 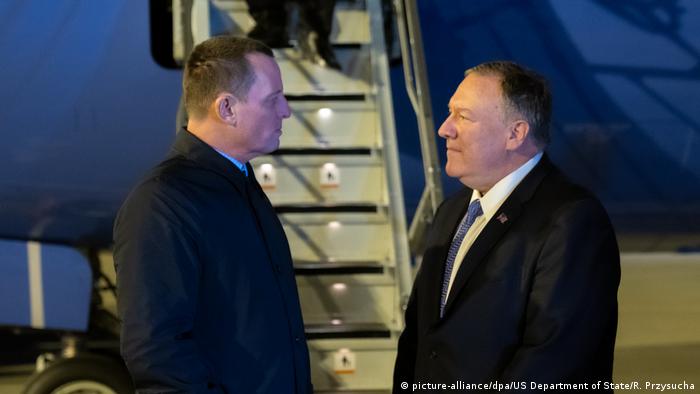 After moving on to Leipzig, Pompeo met with former East German opposition activists in Leipzig, whose protest helped lead to the fall of the Wall and German reunification.

According to local media, one civil rights activist, Uwe Schwabe, refused to attend the meeting over "political concerns."

"Current US foreign policy runs contrary to the goals for which demonstrators took to the streets in 1989," Schwabe told local daily Leipziger Volkszeitung.

Support in wake of far-right terrorism

From Leipzig, Pompeo travelled to nearby Halle in the state of Saxony-Anhalt, where he visited the site of the recent anti-Semitic attack, during which a neo-Nazi gunman killed two people in October after attempting and failing to enter a synagogue in order to carry out a mass shooting.

Max Privorozki, leader of the Jewish community in Halle, said Thursday that he had mixed feelings ahead of Pompeo's visit.

"We are tired," Privorozki told German media. "Our job is actually to organize religious life and not to receive presidents and ministers," he said, adding that Pompeo's visit is "a great challenge, but also a great honor."

Pompeo was met by representatives of the city's small Jewish community as well as the state premier of Saxony-Anhalt, Reiner Haseloff, and Halle Mayor Bernd Wiegand.

Following talks with German leaders on Friday, Pompeo plans to leave Germany just before the actual anniversary of the fall of the Wall, but not before unveiling a new 7-foot (2.1-meter) statue of the late US President Ronald Reagan on the balcony of the US Embassy in Berlin.

US top diplomat Pompeo is in Germany to commemorate the fall of the Berlin Wall. He knows the country well, as he was stationed here during the Cold War. But how much longer will the US keep troops stationed in Germany? (06.11.2019)

If the Berlin Wall had never fallen in 1989, today the German Chancellor might be on a road trip through the US and listening to Bruce Springsteen, she told a magazine. But she wouldn't have taken an American car. (05.11.2019)

The fall of the Wall: Ex-World Bank chief Zoellick remembers