Despite tensions, Merkel and Pompeo underscored the "close friendship" between their two countries during the US secretary of state's visit to Berlin. Earlier, Pompeo slammed authoritarianism in Russia and China. 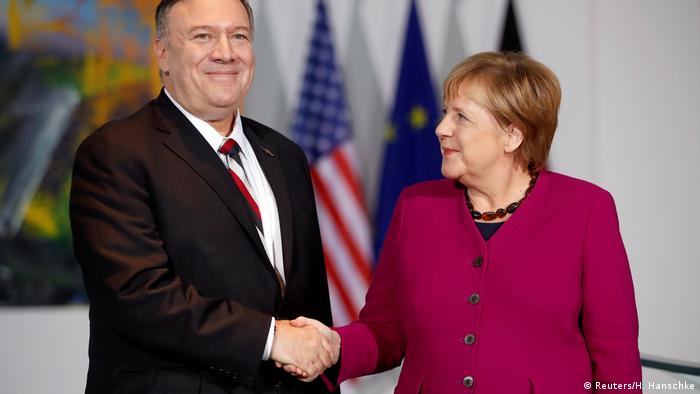 German Chancellor Angela Merkel and US Secretary of State Mike Pompeo struck a conciliatory tone on Friday in Berlin, ahead of commemorations for the 30th anniversary of the fall of the Berlin Wall.

During a joint press conference, Merkel said that Germany "will never forget" the role the US played in reunification or the fact that the two countries "have become such close friends."

Pompeo echoed those remarks, saying that despite the current challenges in the world, Washington values its close ties to Berlin.

"I want everyone to know that we will continue to work on these [issues] together," Pompeo said.

The remarks came ahead of talks between the US top diplomat and the chancellor, in which the two sides discussed the conflicts in Afghanistan, Syria, Ukraine and Libya.

US-German ties have also been strained by Washington's imposition of punitive tariffs on the EU in retaliation for illegal subsidies granted to European aerospace giant Airbus.

During a speech given near Berlin's landmark Brandenburg Gate, Pompeo continued in the vein of his recent criticisms of China, saying the country had suppressed people with tactics that would have been "horrifyingly familiar" to residents of former communist East Germany.

Pompeo also criticized Russia as a country that "invades its neighbors and slays political opponents."

He then called for Western unity in the face of the threat posed by "unfree nations," saying, "Let's stand together as allies."

China on Thursday reacted to Pompeo's recent rhetoric against Beijing, including his censure of the Belt and Road infrastructure project and his accusations of Chinese rights abuses in the region of Xinjiang, calling his comments "extremely dangerous."

Talks between Merkel and Pompeo are also likely to touch on the German-Russian gas pipeline project Nord Stream 2, which the US has strongly criticized as creating too strong an energy dependency on Russia.

Pompeo also visited the US Embassy to unveil a statue of late former US President Ronald Reagan. The statue is located near the site where Reagan gave a famous speech in 1987 calling on Soviet leader Mikhail Gorbachev to "tear down this wall."

Pompeo has discussed security issues and trans-Atlantic relations with German Defense Minister Annegret Kramp-Karrenbauer. Their meeting comes a day after Kramp-Karrenbauer called for Germany to play a much more active military role in the world.

Since World War II, Germany has previously pursued, and been held to, a policy of military restraint in reaction to the aggressive expansionism of the Nazi era.

Kramp-Karrenbauer has been supportive of US demands for Germany to increase military spending, with US President Donald Trump frequently chastising Berlin for not doing enough as a NATO member.

Annegret Kramp-Karrenbauer is on her first official visit to Ankara. Talks with her Turkish counterpart focused on NATO's withdrawal from Afghanistan and tensions in the Mediterranean.

Defense Minister Annegret Kramp-Karrenbauer called allegations of racist and antisemitic behavior "a slap in the face of all those who serve our country." The soldiers were in Lithuania as part of a NATO mission.