Migrants and refugees have threatened a hunger strike in Athens as a protest as they wait to reunite with family members in Germany. Family reunification can take months or years. 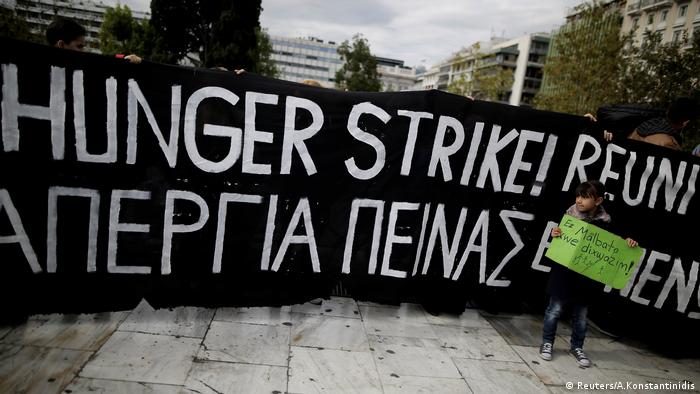 Several dozen migrants protested in front of the parliament building in Athens on Wednesday, demanding to be reunited with family members in other EU countries after being stranded in Greece.

"Reunite our families," read one sign held by the group of mainly Syrians, who threatened to engage in a hunger strike.

Dalal Rashou, a 32-year-old Syrian, said she has five children, including one in Germany with her husband. "I have not seen my husband, my child, for more than one year and nine months," she said. "I miss him and every day I am here in Greece I cry. I don't want to stay here, I want to go to my husband," she said.

Refugees from Syria, Iraq and Afghanistan stranded in Greece can wait between 10 months and two years to be reunited with family. In some cases, they may not qualify.

Local media reported in May that Germany and Greece agreed to slow down family reunification.

However, Greek Migration Minister Yannis Mouzalas told reporters on Wednesday that there has been a 27 percent increase in family reunifications this year compared to last year.

He added that the German government had provided reassurances that refugees in Greece with family members in Germany would eventually be able to rejoin their loved ones.

In general, someone who has received asylum in Germany can bring over spouses and children. In the case of unaccompanied minors, they can bring siblings and parents.

However, German immigration authorities have also given refugees so-called subsidiary protection instead of asylum.

Reunifications have also proven to be a highly contentious topic in exploratory coalition talks following September's national elections in Germany.

Tens of thousands of people became stranded in Greece after countries in Europe sealed their borders when more than a million migrants arrived in 2015-16.

Nearly 150,000 refugees and migrants have crossed to Greece from Turkey this year putting pressure on services to cope.