Leaders from around the world have expressed condemnation over news that Russian opposition leader Alexei Navalny was the target of an assassination attempt. Moscow, however, claims it knows nothing. 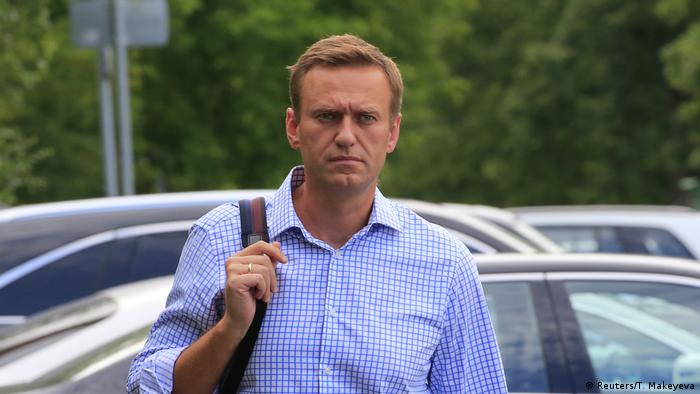 In a short and forceful statement to reporters on Wednesday, German Chancellor Angela Merkel said: "It is certain that Alexei Navalny is the victim of a crime. He was meant to be silenced and I condemn this in the strongest possible terms, on behalf of the German government."

Merkel said toxicology tests proved conclusively that the long-time critic of Russian President Vladimir Putin had been poisoned with Novichok, a military-grade nerve agent developed by the Soviet Union at the end of the Cold War and not known to exist outside today's Russian military.

Within minutes of the announcement, world leaders chimed in to strongly condemn the heinous act.

Read more: Opinion: Navalny in mind, will Germany get tough on Russia?

British Prime Minister Boris Johnson called the use of a chemical weapon "outrageous," saying, "The Russian government must now explain what happened to Mr. Navalny."

US National Security Council Spokesman John Ullyot tweeted: "The United States is deeply troubled by the results released today. Alexei Navalny's poisoning is completely reprehensible," adding, "The Russian people have a right to express their views peacefully without fear of retribution of any kind, and certainly not with chemical agents."

French Foreign Minister Jean-Yves Le Drian said: "I want to condemn in the strongest terms the shocking and irresponsible use of such an agent." Le Drian noted that the use of Novichok violated international laws banning chemical weapons.

European Commission President Ursula von der Leyen said: "This is a despicable and cowardly act — once again. Perpetrators need to be brought to justice."

EU foreign affairs chief Josep Borrell said the bloc condemned the poisoning "in the strongest possible terms," adding, "The use of chemical weapons under any circumstances is completely unacceptable and a breach of international law."

NATO Secretary-General Jens Stoltenberg condemned the use of a military-grade nerve agent, "This is shocking, and I utterly condemn it."

In a tweet, Stoltenberg said: "We will be consulting with Germany and all Allies on the implications of these findings. NATO regards any use of chemical weapons as a threat to international peace and security."

Russian authorities, however, largely refrained from comment, preferring instead to accuse Germany of not sharing findings with Russian law enforcement. Kremlin Spokesman Dmitry Peskov said Russian authorities are "ready and interested in full cooperation and exchange of information." Peskov also reiterated the claim that Russian doctors had not found any poisonous substances in Navalny's system.