A trove of leaked documents has revealed links between leaders and offshore tax havens. Officials in Pakistan and other countries are facing calls for investigation while Germany urged patience in fighting tax avoidance. 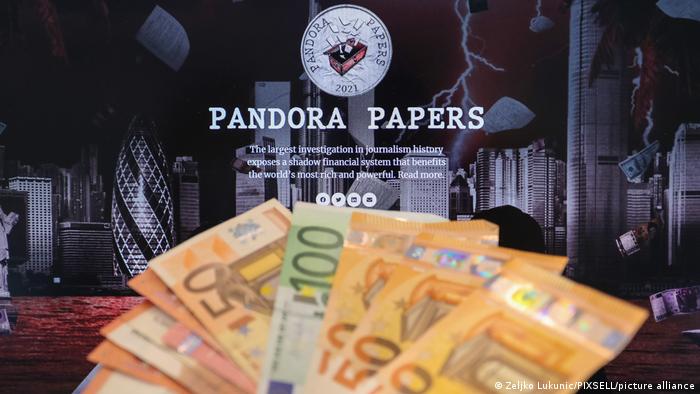 World leaders and public officials named in the Pandora Papers leak sought to minimize damage on Monday amid growing calls for investigations and consequences.

The report, by the International Consortium of Investigative Journalists (ICIJ), which involved scores of news outlets, including DW's Turkish service, revealed hundreds of politicians and public officials who have ties to offshore tax havens.

Among those named were the current finance ministers of Pakistan, Malaysia and other countries. Current world leaders who have vowed to combat corruption and tax evasion, including Czech Prime Minister Babis and Kenyan President Uhuru Kenyatta were also named.

Pakistan's prime minister, Imran Khan, faced pressure from opposition parties on Monday to force the resignations of Cabinet ministers who were named in the report. Among them was current Finance Minister Shaukat Tarin, and over 700 other Pakistanis.

Khan vowed that all who were mentioned in the report would face investigation, writing on Twitter: "If any wrongdoing is established, we will take appropriate action."

Khan's predecessor, Nawaz Sharif, was fired from his post by the country's Supreme Court in 2017 on corruption charges over an earlier leak of documents, known as the Panama Papers.

India's Finance Ministry announced that it would probe cases that were linked to the Pandora Papers leak, saying in a statement that "appropriate action would be taken." The ministry, however, also said that "only a few Indians have appeared so far in the media," with more than 380 Indians appearing in the investigative report.

Malaysia's opposition called for a parliamentary debate over the revelations several current government officials, including Finance Minister Tengku Zafrul Aziz, were linked to offshore firms. Zafrul said on Monday he ended ties in 2010 with the financial entities mentioned in the report, adding that he was considering suing the Malaysian media organization that helped work on the Pandora Papers.

In the Czech Republic, Prime Minister Andrej Babis went on the defensive over allegations that he used tax havens to hide millions of euros. Czech authorities said on Monday they were launching an investigation.

Babis said he had "never done anything illegal or wrong," decrying the reports as an effort to hamper his chances during the October 8-9 parliamentary elections. The prime minister, who came to power on an anti-corruption platform, is already under fire by the European Union over charges of subsidy fraud.

In Russia, the Kremlin brushed off the findings in the Pandora Papers as "unsubstantiated claims." The leaks did not name President Vladimir Putin by name, but connected him via associates to assets in Monaco — including a home owned by a woman with whom he has a child, according to Russian media reports.

"We didn't see anything on hidden wealth within Putin's inner circle," Kremlin spokesman Dmitry Peskov said, casting doubt on "how this information can be trusted."

The German government said it was following the latest reports "very closely" and that more international cooperation was needed to combat the issue of tax evasion.

"It's clear that this progress doesn't immediately lead to an end to tax evasion. Such processes don't take effect immediately, but they are being implemented and will have an effect," Seibert said.

The European Union said it wanted to redouble efforts to crack down on tax fraud. The European Commission, the executive branch of the bloc, will bring forward new legislation later this year to "strengthen the fight against tax evasion" and increase transparency, said Commission spokesman Daniel Ferrie.

Jordan's royal family also sought to downplay the findings of the Pandora Papers on Monday. King Abdullah II denied any wrongdoing in the purchase of several luxury homes abroad — which reportedly are worth over $100 million in total.

In a statement, the court said no public funds were used to purchase the properties and that they were used for official and private visits.

"Any allegations that link these private properties to public funds or assistance are baseless and deliberate attempts to distort facts,'' according to a statement from Jordan's Royal Hashemite Court.

Kenyan President Uhuru Kenyatta did not address the accusations against him and his family that were raised in the investigation — instead saying the report will help "enhance financial transparency" around the globe.

The report alleges that Kenyatta and six of his family members owned a network of 11 offshore companies worth several million dollars. Kenyatta also rose to power campaigning on a platform to crack down on corruption.