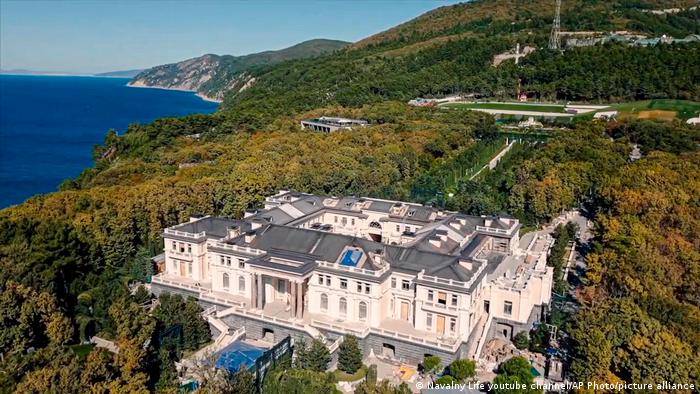 The YouTube feature, accompanied by a blog post from the jailed dissident, claims Putin's property cost $1.35 billion (€1.1 billion) and was paid for "with the largest bribe in history."

The video, released less than two days after Navalny was arrested at Moscow's Sheremetyevo Airport and subsequently jailed. It alleges that the private estate is 39 times the size of Monaco. Among the facilities it is said to boast are an ice rink and vineyards, with the sprawling mansion containing a theater and casino.

Described as the "most expensive palace in the world," the palace complex spans some 7,800 hectares (about 19,300 acres), and also includes a church, an amphitheater, a teahouse and a helipad. The palace was allegedly funded through an elaborate corruption scheme involving Putin's inner circle in return for a favor.

"It is the most secretive and well-guarded facility in Russia, without exaggeration," Navalny says in the video. "This isn't a country house, it’s not a cottage, it's not a residence — it's an entire city, or rather a kingdom. It has impregnable fences, its own port, its own security, a church, its own permit system, a no-fly zone, and even its own border checkpoint. Its like a separate state inside of Russia. And in this state there is a single and irreplaceable czar. Putin."

The video, which finishes with a call for Russians to take a stand against the government, echoes a video from 2017 in which Navalny accused then-Prime Minister Dmitry Medvedev of being at the helm of a luxury property empire. That investigation led to large-scale protests by Putin's opponents.

DW's Moscow correspondent Emily Sherwin said the latest investigation may add to the number of protesters on Saturday, when Navalny’s team have already announced plans for a Russia-wide protest. But for now, the overall numbers will likely be tempered by new restrictions, the ongoing pandemic and unusually cold weather.

"The new Putin investigation will likely attract a lot of clicks, but it's hard to say if it will lead to more to protests, due to tightened protest laws, COVID-19 restrictions and freezing temperatures."

"Protests may build up closer to the Duma elections in September, especially because the coronavirus pandemic has hit Russia's economy hard."

Within two hours, the video had been viewed almost three million views on YouTube. According to the report, the film was produced while Navalny was still in Germany, where he was recovering from an attack with the nerve agent Novichok in August.

Kremlin spokesman Dmitry Peskov said the allegations were old but that the property, near the resort town of Gelendzhik, did not belong to Putin. The allegations were first made in 2010 by Sergei Kolesnikov, a businessman with connections to Putin before his time in politics. On paper, the property appears to be owned by businessman and billionaire Alexander Ponomarenko.

"I am not familiar with the investigation," said Peskov. "However, I can say right away that this record is old. Many years ago, we already explained that Putin has no palace in Gelendzhik."

The video was released soon after Navalny was detained upon his return to Russia from Germany for the first time since he was poisoned. He was sentenced to 30 days in jail.

The 44-year-old claims that Putin ordered the poisoning, an accusation that the Kremlin has repeatedly denied.