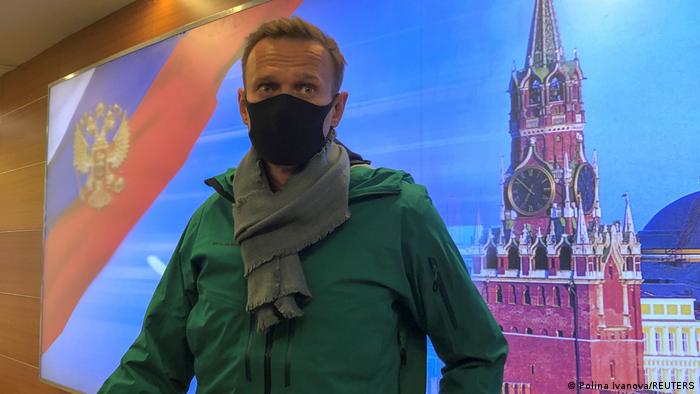 An arrest warrant instead of flowers. With barely enough time to leave the plane, Alexei Navalny was taken into police custody. It was a cold reception for one of the country's own citizens even by Russian standards; a citizen who almost lost his life the last time he was on Russian soil.

Navalny wasn't the only one having to contend with the cold. As they waited for his arrival, political activists, international journalists and Russian police officers had to put up with below-freezing temperatures, harsh even for a Moscow winter. Dozens of police vehicles and extra metal fencing helped turn the Vnukovo airport south of Moscow into an impenetrable fortress.

The press was denied entry into the airport's arrival hall. A public event to meet Navalny at the airport that was organized online was quickly declared illegal. Countless activists and opposition figures were warned to stay away from Vnukovo, and Russian police officers made personal house calls to many of Navalny's confidants.

The government did its utmost to attract as little attention as possible for the return of the "Berlin patient," as he is often called by the Kremlin. Just minutes before the plane's scheduled landing, authorities redirected the flight to a different airport outside the Russian capital.

But their efforts appear to have done nothing to quell admiration for Navalny, whose supporters are calling him a hero — all the more so after his arrest. 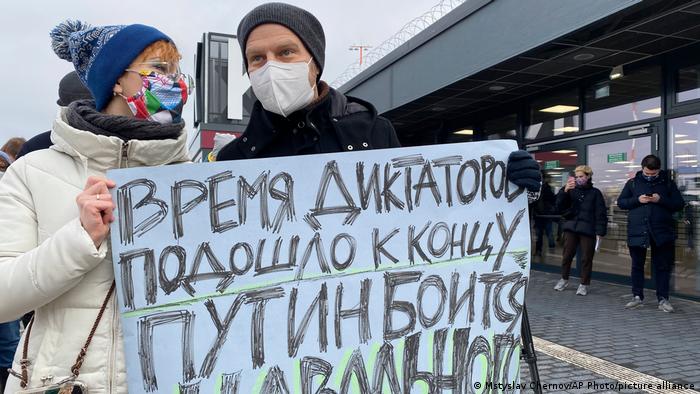 Navalny supporters at Berlin airport held up signs like this one, reading "The time of dictators has come to an end. Putin is afraid of Navalny"

A 'fearless politician' who disturbs Putin

For the independent political scientist Kirill Rogov, Navalny's return is a "brave step." He says the 44-year-old opposition leader is a "fearless politician," whose arrest the Kremlin had long avoided. "Putin is convinced that opposition figures can increase their political influence manyfold while in prison," Rogov says.

Navalny was reportedly poisoned last August on a flight in Siberia with the neurotoxin Novichok. Surprisingly, Russian authorities allowed Navalny to be flown to Germany, where he was treated in Berlin's Charité hospital. The green light allegedly came from Russian President Vladimir Putin himself.

The fact that Navalny has now been arrested, after suffering such a high-profile health emergency, is a sign that Putin is afraid of him, Rogov tells DW. "Navalny has developed a following. Outside of Russia too. And that's exactly what the Kremlin doesn't like. It doesn't want an opposition politician that 70 or 80% of Russians know, and who they can't control." But the Kremlin seems to be hoping Navalny may be easier to control in prison.

Opposition politician Dmitry Gudkov says the Kremlin has miscalculated when it comes to Navalny's arrest. In a DW interview, he compared Navalny with Nelson Mandela, the South African revolutionary jailed during apartheid who later became president. "Mandela ascended to power despite his detention. The same thing will surely happen with Navalny. But then the Kremlin will be giving the world the message: 'Look! First we tried to kill him, and when that didn't work, we put him in jail!'"

A range of charges against Navalny

It is unclear how long Navalny will remain behind bars. Officially, he stands accused of violating conditions of a suspended sentence for a 2014 fraud conviction, which international observers have criticized as unfounded.

Russian police say Navalny failed to properly register his stay in Germany with them as required by his sentence. A court must now decide if the rest of Navalny's suspended sentence should be served in prison. In addition, new charges were leveled against him in December. He now stands accused of embezzling donations to his anti-corruption foundation. Critics say it is yet another attempt to silence the politician.

Moscow denies any involvement in Navalny's poisoning. Instead, Kremlin officials have repeatedly raised accusations of a Western-backed plot and have refused to investigate the attack. During his yearly press conference in December 2020, Putin responded to a question about Navalny's poisoning with sarcasm: "Who needs him? If we had wanted to do that, then we would have seen it through to the end."

His comments came after Navalny said that a "killer unit" of Russia's internal security service, the FSB, was responsible for the attempt on his life. Navalny also says he called one of his alleged assassins under a false name, prompting the agent to admit to being involved in the poisoning.

Russia's FSIN prison service has said it will be "obliged" to arrest Navalny if he returns, claiming he had breached terms of a suspended sentence.