Yulia Navalnaya is instrumental to Russia′s opposition | Europe| News and current affairs from around the continent | DW | 19.01.2021 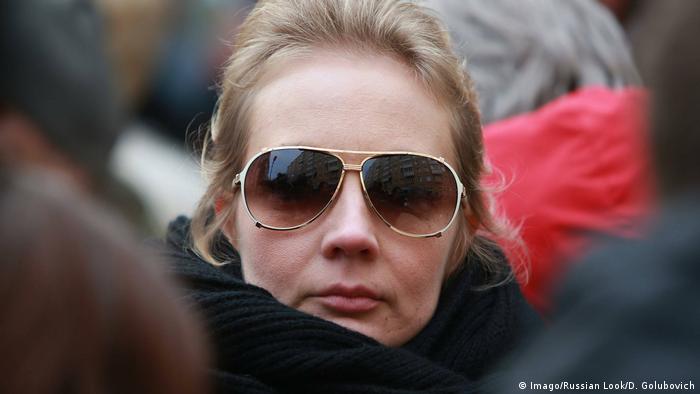 During her husband's long recovery, Navalnaya has become a more public presence

Yulia Navalnaya knew that she might not be seeing her husband, Alexei Navalny, for a while after they landed Sunday at Moscow's Sheremetyevo International Airport. They had just returned from Germany, where Navalny had been treated for poisoning, and the police were arresting him upon arrival. He gave Navalnaya a quick hug.

Numerous cameras recorded the moment when she kissed him on the cheek, wiped away tears and quietly told him goodbye. She pulled her mask over her face and turned to leave. They seemed calm and collected — like it was routine.

Navalanya has plenty of experience saying goodbye to her husband. The opposition leader has been arrested numerous times but has so far been spared long prison sentences. 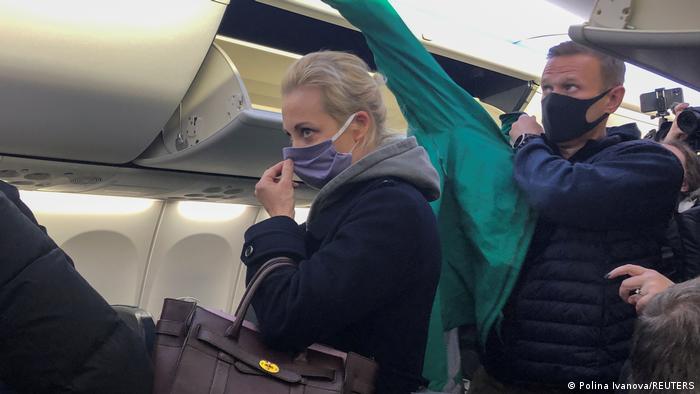 This time, however, he could face more time in prison, after it was reported that Russian prosecutors might seek to overturn a previous probation ruling on the grounds that Navalny had violated the terms of his 3 1/2-year suspended sentence.

In addition, allegations that Navalny embezzled donations to his anti-corruption foundation could lead to new charges. So far, authorities appear less interested in investigating his attempted murder by poisoning with the nerve agent Novichok, which opposition leaders believe was ordered by President Vladimir Putin and Russia's Federal Security Service, the FSB. Kremlin officials vehemently deny involvement in the matter.

"There is nothing we cannot face," Navalnaya wrote Monday on Instagram. "Everything will ultimately be fine." It was the same message that she had written back on August 20 to her 460,000 followers after her husband nearly died when he was poisoned in Siberia.

In December, the Moscow newspaper Novaya Gazeta called Navalnaya its "heroine of the year." What will be remembered above all is her resolute demeanor at the hospital in Omsk while her husband was in a coma and the open letter she wrote to Putin, demanding that he allow her sick husband be flown out of Russia to Germany for treatment.

Navalny's doctors had opposed the transfer, but Novaya Gazeta applauded the dignity with which she attempted to reach her goal. Following the publication of the letter, Putin later issued orders to transfer Navalny to Berlin. She flew to the German capital with her comatose husband, and he was treated at the famous Charite clinic.

When he was recovering, Navalny published a declaration of love to his wife on Instagram and spoke in emotional terms about how well she took care of him and how much she helped him to get healthy again. He congratulated her on their 20th wedding anniversary, which he missed while in a coma, and ended by stating: "Yulia, you saved me."

In a two-hour interview with the Russian YouTube journalist Yury Dud, Navalnaya sat by her husband. They told their host that they would return to Russia. "I am not afraid," Navalnaya said. Previously more of a supporting character in her husband's fight against Putin, Navalnaya has taken on a more prominent role, with social media postings showing them at home, taking walks in Moscow and during his treatment in Germany. It is a stark contrast from Putin, who keeps his family completely out of the public eye. Navalnaya told Dud that her husband's fight against corruption was hers, as well.

Navalnaya grew up in Moscow and studied foreign trade. She met her husband while on vacation. They have two children.Their daughter is currently studying in the US, while their son is still in school in Russia.

Within Russia, Navalnaya has been compared to Sviatlana Tsikhanouskaya, who became a prominent opposition politician in neighboring Belarus after her own husband was imprisoned. If her husband is kept in prison, Navalnaya could decide to do just that. Parliamentary elections are scheduled for autumn in Russia.