Pakistan: Backlash grows against PM Imran Khan′s ′sexist comments′ | Asia | An in-depth look at news from across the continent | DW | 29.06.2021 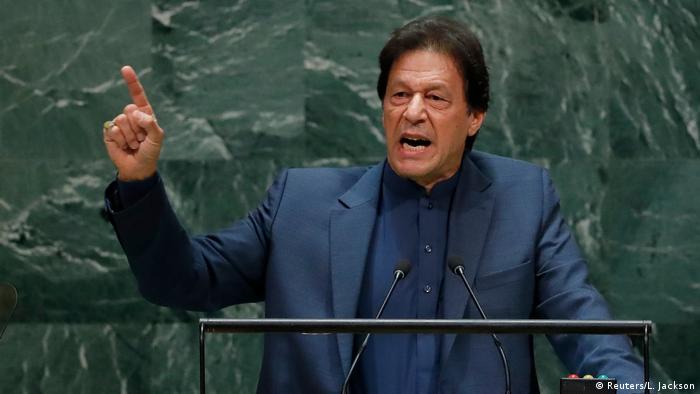 Khan, seen here at the UN General Assembly in 2019, is no stranger to controversy over comments regarding women's rights

Pakistan's Prime Minister Imran Khan is once again facing backlash following comments that appear to put the blame for sexual abuse on women.

"If a woman is wearing very few clothes, it will have an impact on the men, unless they are robots," Khan said during an interview for documentary-news series Axios, aired by US broadcaster HBO. He proceeded to say that this was "common sense."

Khan's made the comments around two months after a similar controversy. During a question and answer briefing with the public, Khan had said that the rise in sexual violence in Pakistan was due to the lack of "Pardah," the practice of veiling, in the country.

Gender-based violence and equality in Pakistan

Human rights activists are worried that Khan's comments may validate and embolden sexual violence in a country that already experiences high levels of gender inequality and gender-based violence.

According to the Global Gender Gap Report 2021 by the World Economic Forum, Pakistan slipped two spots since last year, now ranking among the four worst countries worldwide for gender equality.

The Human Rights Commission of Pakistan reported there are almost a dozen rape cases reported every day. Only 0.3% of the accused are ever convicted.

In addition to sexual assault and rape, women in Pakistan are vulnerable to all forms of violence. According to Human Rights Watch, almost 1,000 women are murdered in Pakistan in so-called "honor killings" each year, which are carried out when women break with deep-seated social norms, such as by choosing to wear different clothes or attempting to live independently.

The problem with victim-blaming

Nida Kirmani, professor of sociology at Lahore University of Management Sciences (LUMS) told DW: "The PM's remarks are not only offensive; they are dangerous to the struggle against sexual violence, reinforcing that men are uncontrollable beasts and that victims are responsible for the crimes committed against them."

The Human Rights Commission of Pakistan has demanded "an immediate public apology from the prime minister." It sought "assurances that his highly flawed perception of how and why rape occurs does not inform the government's attempts to tackle what is a serious and prevalent crime in Pakistan."

Khan's comments "demean masculinity by implying that men who do not have the desire to rape are not 'real' men but robots," Areej Hussain from Pakistan's Women's Democratic Front told DW.

Additionally, Hussain agrees that the comments take away accountability because they suggest that "men who do rape are somehow not responsible for their actions but driven into some frenzy at the sight of skin."

Khan was simply telling the 'truth' about Pakistan

Armaghan Shahid, a music director, told DW that he does not believe Khan's comments strip away men's agency or promote a certain masculine role. He argues that systemic issues such as gender segregation are already denying men agency, "which does not prepare men for interactions with women." He believes that Khan's comments were alluding to this.

Fahad Mahmood, 30, a student whose 32-year-old cousin was murdered by her family after she sought to forge an independent life, told DW that Khan was not victim-blaming but was telling the "truth" about the men in the country. He thought that Khan lacked the "articulation" to express his views better.

Alia Amirali, a member of the socialist-feminist party Awami Workers Party told DW that Khan's comments "clearly adhere to a populist [political] stance" that views women's equality with skepticism as part of a "Western agenda" rather than as a human right.

Kirmani from LUMS agreed, noting that Khan deems himself an "anti-imperialist hero." But, she believes that Khan unwittingly "actually reinforced the colonial idea that Muslim men are backward and overly sexual," through his comments.