Swedish MEP Anna Marie Corazza Bildt on Conflict Zone: As long as member states are not united, Europe will be weaker.

"There is a lack of solidarity among member states. Don't blame it on Brussels," an outgoing conservative MEP tells DW's Conflict Zone.

Member of the European Parliament Anna Maria Corazza Bildt told Tim Sebastian that higher voter participation in the recent European elections shows that people are starting to understand how relevant the EU is and how it affects their daily lives and future.

The Italian-born MEP for the Swedish Moderate Party admitted that populists did achieve some successes as well: "They won very strong in Italy ... Italians feel left behind, genuinely, in migration.  And [Italian Interior Minister Matteo Salvini] has been stirring emotions and fears like populists do, but not giving any answers."

Sebastian asked if the mainstream parties had ignored warnings about climate change, growing inequality and migration and left the door open for the recent rise of populism.

"The far right in Europe has unfortunately always existed," the MEP said.

Did the recent wins by the far right lead the EU to try to outflank populists on migration?

"Politics is full of mistakes," Corazza Bildt said but stressed that the EU is based on values. "The rule of law is the strength of the European Union. Populists want to close borders and raise walls. We want to manage migration."

On migration in particular, Corazza Bildt said populists offered no solutions, just rhetoric. She also said the problem was not the EU's fault: "There are 68 million, more or less, people on the move right now in the world. You cannot blame all of the European Union for that."

Sebastian said EU efforts to control migration by making deals with Turkey and Libya left people subject to imprisonment, violence and sexual abuse or hopelessly stranded: "You said work with external partners ... these are clearly the wrong ones then, aren't they?"

"We are working to stabilize Libya ... the situation now is a civil war," the MEP admitted, but said, "It's impossible to deal with a solution for migration and asylum without working with Turkey."

Sebastian said the EU deal with Turkey on returning refugees had the effect of worsening conditions in Greek refugee camps, leaving as many as 20,000 people stranded. 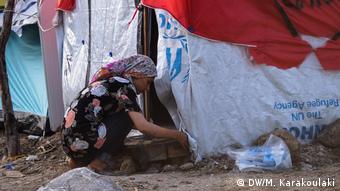 Corazza Bildt said Athens had not done enough: "A communist government in Greece could not put up the institutions that are necessary ... Greece has a lot of help from the European Union but it takes two to tango."

She also said "extreme-right" politicians such as Hungarian Prime Minister Viktor Orban had blocked EU-wide solutions. Corazza Bildt criticized other EU countries for not living up to agreements to relocate refugees from Italy and Greece: "There are not enough member states in the European Union willing to do relocation."

Corazza Bildt insisted her conservative bloc in the parliament, the European People's Party, were guided by a strong set of values. "We stand for fundamental rights, for human rights. We want a humane, rules-based common European asylum and migration policy," she said.

The MEP, who had previoulsy worked in the Balkans for both the United Nations and EU, said the European Union needs a common foreign and security policy. "As long as member states are not united, Europe will be weaker."

Corazza Bildt said what she called the "chaos" of Brexit had "vaccinated" the rest of Europe and "showed that stability is when you are in the family and implosion is when you want to leave the family."

The MEP, who was first elected in 2009, warned that far-right governments in Hungary and Poland should be sanctioned if they violated EU values. She also criticized her own group in parliament for not expelling expelling Orban's party.

Corazza Bildt said Europeans were expecting more and said she hoped the debate on Europe became less about demonizing Brussels and more about looking towards a common future. "The future Germany and the future of Europe go hand-in-hand," she said.

Addressing her own future the outgoing MEP who also has her own business, said she was looking forward to still contributing to Europe's future, "I have so much to give."