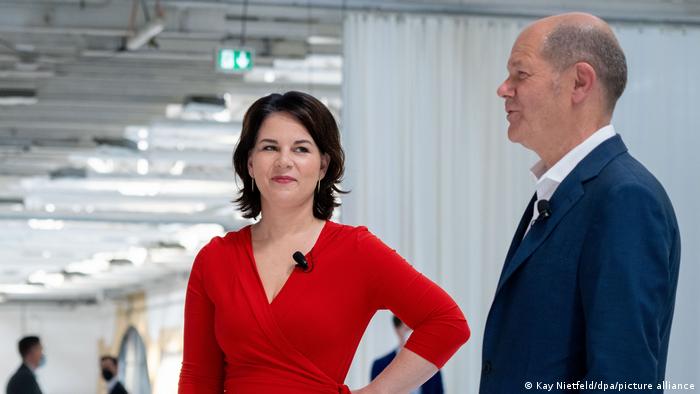 You certainly can't accuse Annalena Baerbock of lacking drive and determination. Barely in office, she has completed a whirlwind tour abroad, with visits to Brussels, Paris and Warsaw. Then it was off to the G7 foreign ministers' meeting in Liverpool, followed by a disarmament conference in Sweden.

And she's not afraid to get her hands dirty. After the verdict in the Berlin Tiergarten murder, which explicitly states that the murderer, a Russian national, acted on behalf of Russian authorities, Baerbock declared two employees of the Russian embassy persona non grata and summoned the ambassador.

Still, foreign policy is likely to become a constant bone of contention within the coalition made up of the Social Democrats (SPD), Baerbock's Greens, and the neoliberal Free Democrats (FDP).

Essentially, the lines of conflict run like this: Baerbock wants to throw out previous foreign policy strategies with the bath water and give human rights policy and climate protection a new status in her remit. Chancellor Olaf Scholz of the SPD, on the other hand, is s stickler for the continuity of Angela Merkel's policies. Sooner or later, they will clash.

Take China: The Chancellery has not exactly bent over backwards to deny that Scholz had already informed the leadership in Beijing in mid-October, well before he became chancellor, that Germany's stance on China would not shift greatly. Scholz does not want to rock the economic boat.

That was undoubtedly a dampener for the Greens and the FDP who had managed to include a passage in the coalition agreement that explicitly mentions China's human rights violations in Hong Kong.

Baerbock's approach is very much value-driven, but what that means in concrete terms remains vague. Rolf Mützenich, the powerful leader of the SPD's parliamentary group, has wasted no time in showing Baerbock her limits. Much to the chagrin and indignation of the Greens and the FDP, Mützenich cut to the chase and said that foreign policy is largely determined in the Chancellery.

Complain as they may, the Greens and the FDP will have to deal with that painful lesson, especially where EU policy is concerned. Just ask the many foreign ministers who worked under Angela Merkel.

Nord Stream 2: Another bone of contention

Government members were quick to laud Baerbock for her swift and decisive action following the verdict in the Berlin Tiergarten murder. However, whether she can count on them to support her quest to prevent the Nord Stream 2 gas pipeline from becoming operational is another matter. If Russia were to attack Ukraine, the EU would certainly consider it. But only then.

The Social Democrats have always been and still are in favor of the gas deal with Russia. Chancellor Scholz laid it out quite succinctly recently, saying the pipeline was now no longer a political problem — it would be up to the authorities to approve it or not. He knows full well that Germany will need the gas once the last German nuclear power plants go off the grid next year, and even more so if the expansion of renewable energies fails to pick up as quickly as the Greens would like.

On nuclear disarmament, Baerbock is pushing for fewer stockpiles of nuclear weapons. Yet there are still US nuclear weapons stored in Germany that could be dropped from German aircraft in the event of a crisis. That's known as the nuclear sharing policy which will continue under the new government — not least because Germany is planning to procure new aircraft for that purpose. As it stands, Baerbock's campaign is nothing more than an appeal.

In a smart move, Baerbock has taken over responsibility for international climate negotiations, which until now has always been part of the Environment Ministry's remit. It signals an upgrade for the Foreign Office and a logical step for a Green minister.

Whichever way you look at, German foreign policy is about to get more exciting than it has been for a while — a welcome development.

'A European by heart': German FM Baerbock in Brussels