US-Russia policy is now wholly in the hands of Congress, which bodes badly for the Kremlin. It has lost its ability to intimidate the West as sanctions and international isolation take a toll, writes Konstantin Eggert. 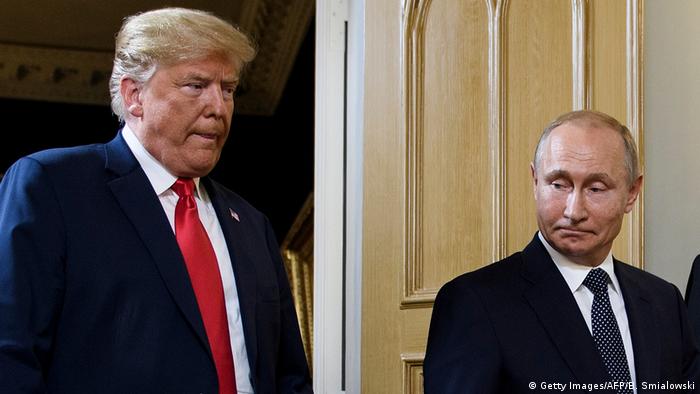 Bracing for sanctions has become something of a routine for the Russian leadership. The United States is expected to impose a new set of restrictions on Russia by the end of this month. This time it is not because of Moscow's actions in Ukraine or alleged election interference in America.

Washington is using the 1991 Chemical and Biological Weapons Control and Warfare Elimination Act to sanction the Kremlin for the poisoning of former GRU officer turned MI6 agent Sergei Skripal and his daughter Yulia in the English town of Salisbury last March. This law was used only twice before — against Syria and North Korea. Starting Wednesday, the United States will, among other things, prohibit the sale to Russia of any dual-use technology (i.e., such that can be used both for civilian and military purposes). If Moscow does not comply with the demands of the act  — promising not to engage in chemical attacks and letting the UN inspectors into facilities where chemical or biological agents could be produced — another round of sanctions would follow in 90 days. They could include more trade restrictions, a downgrading of diplomatic relations, such as recalling the US ambassador, and, ultimately (although unlikely), even a ban on Russian state carrier Aeroflot's flights to the US.

The Kremlin adamantly denies any connection with the Skripals' poisoning. No one expects it to comply with US demands, even though the Chemical Weapons Convention — to which Russia is a signatory — mandates letting the international inspectors in. So, in late November Washington will most probably slap the second round of sanctions on Moscow.

In the meantime, another, potentially much more damaging series of restrictions could hit Russia. There is a bipartisan draft bill that the Senate has begun debating. Designed to punish Russian interference in US elections, it calls for a ban on transactions with Russian sovereign debt and maybe even a ban on US dollar transactions with Russian state banks. Democratic Senator Bob Menendez's proposal to designate Russia officially as a "state sponsor of terrorism" based on the Skripal case probably won't pass into law.

But the poisoning serves to further darken Moscow's already tarnished international image, as did the shooting down of a Malaysian Airlines plane over the Donbass region in 2014. An international investigation into the downing of flight MH17 continues, determined that it was a Russian-supplied (and, possibly, Russian-operated) anti-aircraft missile that downed the airliner, possibly mistaking it for a Ukrainian army transport plane. All 298 passengers and crew were killed. A four-year campaign of obfuscation and disinformation by officials in Moscow only helped to convince wide swathes of international public opinion that Russia was indeed the culprit. Such a reputation makes imposing additional sanctions psychologically easier.

Finally, The Wall Street Journal has reported that the United States may cripple, if not completely dismantle, the Nord Stream 2 gas pipeline project between Russia, Germany and other EU states. Washington plans to sanction companies that participate in the consortium (including Germany's Wintershall GmbH) and maybe even banks that would finance the construction. These are very bleak prospects for the Kremlin indeed.

Moscow's assertions that sanctions do not have any effect on the Russian economy were given the lie again on August 9 when the ruble went into free fall. It happened after Kommersant newspaper published a draft of the new senate sanctions law. Recent government measures like drastically raising the pension age and increasing VAT from 18 to 20 percent are proof that money is becoming increasingly scarce.

But the consensus in Moscow is that Vladimir Putin will not back down on any of the contentious issues to alleviate the sanctions regime. In his view this would show "weakness" — which he abhors most of all. This fear is the dominant emotion among Russia's oligarchs and top-level bureaucrats. Their very real concern about the effects of the Western sanctions on the Russian economy and their personal assets is offset by the necessity to constantly show loyalty to the Kremlin and publicly bash the West in order not be seen as "weak," too.

How could Putin respond? Terminating sales of RD-180 rocket engines for the US space program comes to mind first. But it will hit the Russian aerospace industry as much, if not more, as it will the Americans', strapping it of a significant cash inflow. Moscow will no doubt ban US civilian planes from its airspace if Aeroflot is banned from flying to the United States. The Russian government could also stop imports of bourbon and Californian wine as well as close the two remaining American consulates — in Vladivostok and Yekaterinburg. This would only lead to the closure of two remaining Russian consular stations in the US — Houston and New York.

That's pretty much it. Quite a limited arsenal compared to the one the US can deploy. Moscow is now powerless to influence the American administration. The speed with which Donald Trump's Russia-friendly pronouncements after his meeting with Vladimir Putin in Helsinki were nullified and replaced by a new round of sanctions showed: US-Russia policy is now almost completely in the hands of Congress. At the same time, the lack of trust between the two countries is close to Cuban missile crisis levels.

The Russian leadership seems to have lost its previously unmatched ability to intimidate the West in order to be appeased. No one — at least in Washington — seems to be afraid of Moscow's unpredictability anymore. And while oil and gas revenues still cushion the Kremlin from any significant social upheavals at home, sanctions and international political isolation are gradually taking their toll.

Konstantin Eggert is a Russian journalist.