US to impose sanctions on Russia over Skripal poisoning

The sanctions come after the US determined that Russia had used a chemical agent against a former spy. Kremlin officials have expressed optimism for "constructive" dialogue, but are still weighing their response. 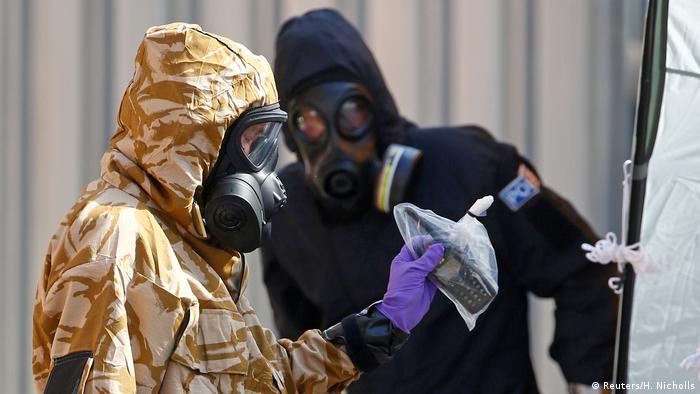 The United States will impose sanctions on Russia for using a "lethal" nerve agent against a former Russian double agent and his daughter in Britain, the State Department said Wednesday.

The sanctions will target the Russian government for using "chemical or biological weapons in violation of international law," Nauert said in a statement.

The new sanctions target sensitive national security and defense goods, a senior State Department official said in a conference call with reporters. This reportedly includes dual-use technologies and goods, which Russia can use for both civilian and military purposes. However, there would be case-by-case exceptions for space flight activities and commercial aviation, the official said.

The sanctions go into effect on or around August 22.

If Russia is unable to prove within 90 days that it will not use chemical or biological weapons and allow United Nations inspections, then a second round of "more draconian" sanctions would be imposed, the official said.

The US is "acting like a police state" and treats the Skripal issue in a manner reminiscent of "lynchings," said Konstantin Kosachev, the head of the the foreign affairs committee in Russia's upper house assembly, the Federation Council.

Imposing the sanctions "would mean that the US is once again demonstrating the behavior of a police state, beating the evidence out of the suspect by threats and torture, and, in the bottom line, punishing without crime in the worst traditions of well-remembered lynchings," he told the Interfax news agency.

Separately, Russia's Washington embassy commented it was "accustomed to not hearing any facts or evidence" that Russia was behind the Skripal poisoning.

"The American side refused to answer our follow-up questions, claiming that the information is classified. However, we were told that the US has enough intel to conclude that 'Russia is to blame'," they said in a statement.

The Russian embassy said they were urging an open and transparent investigation and that this position was outlined in their written communiction with the State Department.

"We suggested publishing our correspondence on this issue," they said. "No answer has followed so far."

Russia holds off on countermeasures

At the same time, he said it would be "inappropriate" to discuss Russia's eventual countermeasures "until we officially and specifically understand what this is about."

The Kremlin has vehemently denied using a Novichok-type nerve agent against the Skripals in March. Moscow representatives also repeatedly hinted that the affair was aimed at undermining Russia on the global stage.

Months after the attack in Salisbury, two residents in another southern English town with no ties to Russia were poisoned by a Novichok-type poison. One of them died. British investigators believe they accidentally came into contact with the poison.

Yulia Skripal has spoken for the first time since she and her father were poisoned by a nerve agent in Salisbury in March. Skripal said her recovery had been "slow and painful" and she one day hoped to return to Russia. (24.05.2018)

British PM Theresa May has said it is "deeply disturbing" that two more people have been exposed to the Novichok nerve agent. It still remains unclear how the couple came into contact with the dangerous substance. (05.07.2018)

British authorities reportedly believe two Russians were involved in the nerve agent attack in the southern English city of Salisbury. The Kremlin is expected to reject the request. (06.08.2018)

US sanctions leave European firms in a bind