Trump now claims he misspoke when he said he didn't see any reason why Russia would have meddled in US elections. He has now reversed his position and claims "full faith" in the US intelligence community. 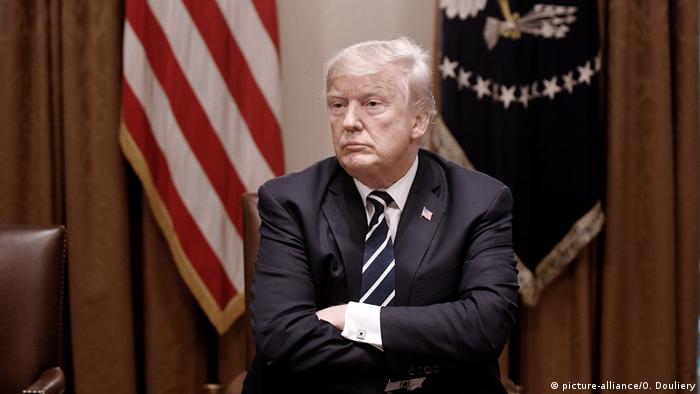 US President Donald Trump on Tuesday attempted to clarify comments he had made at a press conference with Russian President Vladimir Putin in Helsinki, which provoked the outrage he faces at home. Standing next to Putin on Monday, Trump cast doubt on his country's intelligence agencies' assessment that Russia had meddled in the 2016 US presidential election. "I don't see any reason why it would be," the president said.

On Tuesday, Trump spoke plainly on the matter and also read from a prepared statement. "What is going on, what's the big deal?" the president said he wondered, as he faced united backlash from top Republicans, Democrats and the intelligence community.

He said he then reviewed the transcripts of his Helsinki statements and explained that he had misspoken. "I said the word 'would' instead of 'wouldn't,'" Trump told reporters at the White House.

"The sentence should have been, 'I don't see any reason why it wouldn't be Russia.' Sort of a double negative," the president said.

The US president followed this by saying that "while Russia's actions had no impact, at all, on the outcome of the election," he accepted the intelligence community's conclusions.

Trump then added that "it could be other people also, there's a lot of people out there."

During his remarks, Trump reiterated his belief that it was a good thing to get along with Russia and highlighted the successes of his three stops in Europe.

"As successful as NATO was, I think this was our most successful visit," Trump said of the Helsinki summit.

He then accused the media of covering the NATO meeting "quite inaccurately" and doubled down on pressuring the members of the defense alliance to raise their spending targets.

Read more: Finland an East-West nexus as Trump and Putin come to talk

Several senators from both parties came out in support of tougher sanctions on Russia. Republican Senate Majority Leader Mitch McConnell and House of Representatives Speaker Paul Ryan called Russia's government "menacing" and said they could consider additional sanctions on Russia.

Some US lawmakers have suggested passing resolutions to voice support for intelligence agencies or to invest more in election security and preventing cyberattacks.

"We're trying to figure out what would be an appropriate way to push back," Republican Senator Bob Corker, chairman of the Senate Foreign Relations Committee, told reporters. "You know the president can do more damage in 15 minutes at a press conference than we can undo in six months of passing resolutions."

Donald Trump, Vladimir Putin give their spins on Helsinki summit

In an interview with US media, Trump claimed Germany's chancellor is "paying Russia billions of dollars." Putin claimed a probe into Russian meddling is just "political games." Both appeared fond of newfound relations. (17.07.2018)