The Trump-Putin tete-a-tete has brought Finns into the streets to protest both men's presence and policies. Teri Schultz looks at the high stakes but low expectations in Helsinki. 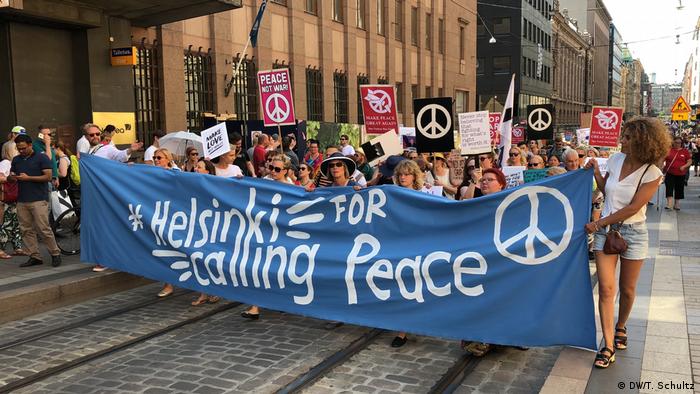 The singer ended his song with the rowdy recommendation that "Trump and Putin — piss off!" as the crowd erupted into wild cheers at Sunday's special summit-themed concert to cap off a march through downtown Helsinki.

Two blocks away from where Donald Trump and Vladimir Putin will meet Monday afternoon, the band stood atop a stage reading "We Really Do Care" in a rebuke to Melania Trump and the now infamous outerwear she displayed while visiting detention camps for children on the US border. "Make Human Rights Great Again," Amnesty International pleaded in banners in Helsinki, where it had put up posters across town.

Ellis Saavalainen, a Finnish-American 20-year-old, said he had marched to protest Trump's immigration policies and "the way he treats other countries." Asked whether he held the same feelings toward Putin, Saavalainen said his priority was speaking out against the US president. "The tension isn't good for our global community," he said.

Strolling in another part of town, Jaana Mikkila told DW that she hoped the summit would alleviate some of that tension. She wasn't sure what to expect, but "they hopefully will take good decisions after serious discussions," she said.

Sanna Leino was worried about what kind of decisions those might be. "Maybe Trump gives away the Baltic states!" she said. On the bright side, she added, "it has been great marketing for Finland." 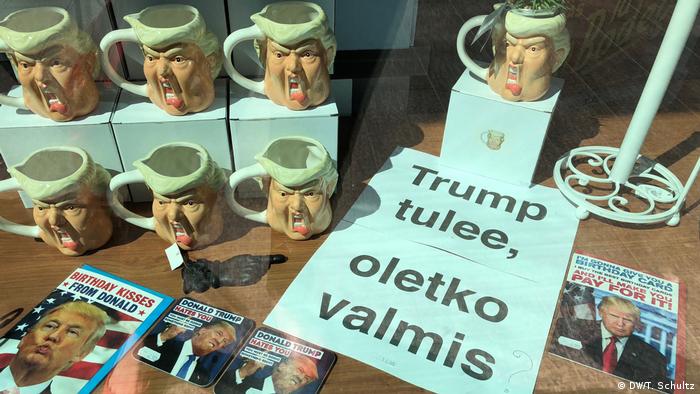 The sign in this Helsinki window reads: "Trump is coming — are you ready?"

Charly Salonius-Pasternak, an analyst at the Finnish Foreign Policy Institute, is among those casting a pessimistic eye on the summit — especially after Trump's chaotic appearance at NATO and disruptive visit to the UK over the past week. "He goes out of his way to behave in a way no other US president would have behaved," Salonius-Pasternak told DW. "The worst thing is that, for the first time ever, it seems like a Soviet/Russian president and the US one have the same strategic goal: to weaken and divide Europe."

Salonius-Pasternak fears that Trump's command of world affairs lacks the necessary punch to take on Putin on equal terms. In addition, the comments that the president has made in apparent support of Russia's 2014 annexation of Ukraine's Crimea region — referring to its Russophone population and to the investment Moscow has made into the peninsula since the land grab, for example — have been alarming to a wide audience.

"If he even just implicitly suggests that some of Russia's behavior has been okay because of history or whatever other reason he gives," Salonius-Pasternak said, "that, I presume, will have very negative repercussions."

Read more: What Donald Trump and Vladimir Putin should agree on in Helsinki

Graham Brookie, who served on President Barack Obama's National Security Council and now directs the Digital Forensic Research Lab to combat Russia's disinformation, was disappointed that Trump did not reiterate US policy rejecting the annexation of Crimea. "The buck stops with him as the United States president," Brookie said. "It would be a stark reversal of the last administration's policy not to continue to [do that] ... and also a gross abdication of the United States interests."

Brookie also is concerned that Trump's offhanded comments show that he doesn't have high expectations for the meeting. "From the side of the United States, there hasn't been a clear statement of goals," he explained. "What they expect going into that summit, what they expect coming out of that summit, and what their intent is. That's not a particularly reassuring talking point."

Jim Townsend had a long career working on US-Soviet and US-Russian relations as a US deputy assistant secretary of defense for European and NATO policy. Now with the Center for a New American Security, Townsend views the outcome of the NATO summit as weakening the US position heading into the Helsinki talks. "[Trump] is now a bit estranged from the alliance, which has certainly been on the top of the list of any Russian president," Townsend said, adding that Putin is surely calculating how to maximize the dissatisfaction that the US president expressed about NATO.

While reluctant to make predictions, Townsend hazarded some guesses about how Russia would approach the summit. "Putin may say: 'Look, I feel your forces that are in Poland, your forces that are in Germany are expensive to you and they're provocative to me. Why don't you do us both a favor and move them out of Germany? And I'll see what I can do to help you in Syria,'" he said.

Trump has already implied that he's considering pulling US troops from their German bases out of displeasure with Germany's low defense spending.

Though no one knows what will happen Monday, observers agree that Helsinki is a competent host for the event. The city hosted Gerald Ford and Leonid Brezhnev in 1975, George Bush and Mikhail Gorbachev in 1990, and Bill Clinton and Boris Yeltsin in 1997.

Plus, the 1,340-kilometer (830-mile) border with Russia means that the Finns have more than a passing interest in making sure Washington-Moscow interests are balanced. "It means a lot to them that this summit goes well and that there's stability in the region," Townsend said, suggesting that any advice about managing Moscow that Finnish President Sauli Niinisto might slip to Trump "is something he should listen to: They know what they're doing."